Super light, fluffy and deliciously moist, no one will believe you that this Vegan Chocolate Orange Loaf Cake is actually vegan!

Vegan food is increasing in popularity

Over the last few years, veganism has become a lot more popular. Whether you are vegan, dairy free or just trying to eat less dairy; vegan cakes are great to have in your repertoire. It is always nice to have a collection of recipes you can go to so that everyone’s dietary requirements are catered for. It makes people feel more loved and included if you can cater for them which is always lovely. Another variation that you might like are Gluten Free & Vegan Chocolate Orange Cupcakes.

Not at all. If you weren’t told this Vegan Chocolate Orange Loaf Cake was vegan, I strongly believe you wouldn’t be able to tell. Numerous people have tasted this cake and other vegan cakes I have baked and they wouldn’t have guessed. When they find out they are surprised at how light and fluffy they are.

I know this cake doesn’t have buttercream, but I think dairy-free margarine makes absolutely delicious buttercream. My Vegan Chocolate Hazelnut Cupcakes are my favourite cupcakes and a lot of this is to do with the silky smooth buttercream.

One of my least favourite baking tasks is sifting ingredients. Because of this, I do try to avoid sieving as much as possible but please do make sure you sieve the flour and cocoa powder for this cake. If you don’t you do run the risk of little lumps of flour finding their way into your finished cake. While this isn’t a disaster, it doesn’t look the best in the finished cake. So bite the bullet and get your sieve out!

Don’t get alarmed by adding coffee to the cake! Coffee is a great way of enhancing the chocolate flavour in baking. You won’t taste it in the finished cake but it will have worked its magic.

Super light, fluffy and deliciously moist, no one will believe you that this Vegan Chocolate Orange Loaf Cake is actually vegan!

Keep in an airtight container for 2-3 days. 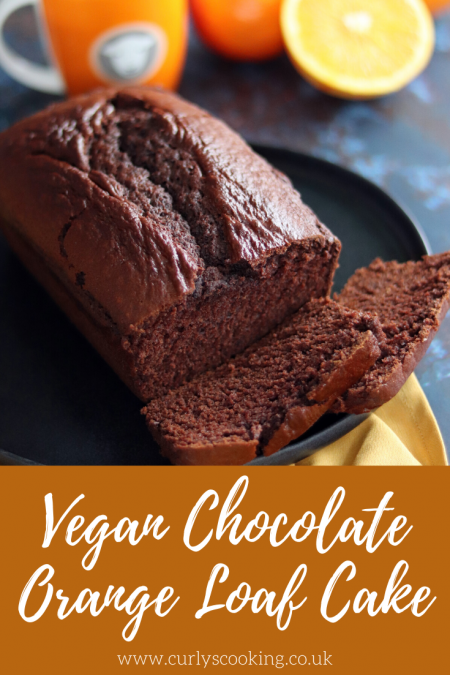