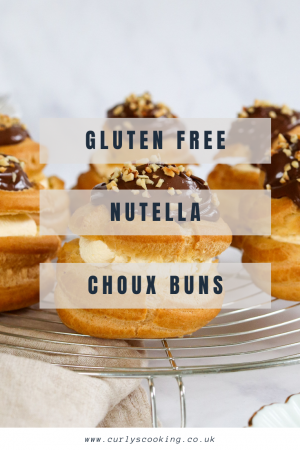 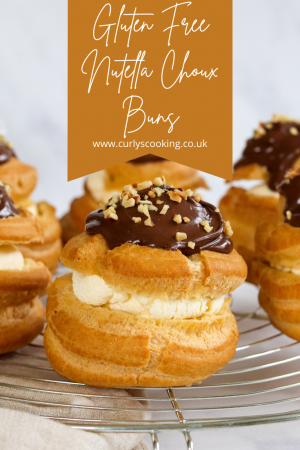 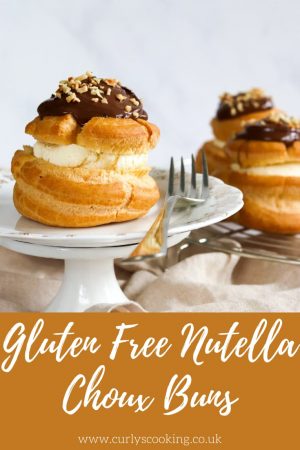 What are choux buns?

Choux pastry or pâte à choux is a form of pastry made using flour, water, butter and eggs. Instead of using a raising agent, it relies on the high moisture content to steam the pastry as it bakes.

Classic ways of using choux is for eclairs, profiteroles or choux buns. Choux buns are simply put a larger version of profiteroles. You would just eat one choux bun whereas you would eat multiple profiteroles.

They are also often called cream puffs in the US.

I first made these for a weekend in the Cotswolds with my lovely Uni friends. One of my friends has coeliac disease so whatever I made had to be suitable for us all.

I adapted Glutarama’s éclair recipe for these Nutella Choux Buns. She has so many delicious gluten free recipes I knew her choux pastry would be no different.

If you are familiar with gluten free food, it sometimes doesn’t taste quite like its gluten containing counterpart. The great thing about making these Gluten Free Nutella Choux Buns is that no one could taste any difference.

These buns are great to make so that everyone can enjoy the same dessert.

I am a massive fan of Nutella and use it in baking whenever I can.

I did realise a few years ago that Nutella includes palm oil. However they have since changed their recipe and now only use sustainable palm oil.

If you don’t want to use any products that include palm oil, then Gü have a delicious palm oil free version.

You could also just use melted chocolate if you prefer.

WHICH HAZELNUTS ARE BEST TO USE?

I prefer to use roasted hazelnuts because they have a nice toasty flavour.

You can buy these toasted and chopped from most supermarkets which is very convenient.

If you would prefer you can buy them whole and roast them in the oven for ten minutes or so until they smell toasted and delicious. You can then chop them or blitz them in a mini food processor.

Which cream is best to use?

You can use double or whipping cream for these choux buns. I tend to buy double cream (heavy cream) through habit, but you can use either.

Double cream has a higher fat content and is easier to overwhip because of this. So if this is something you are worried about, use whipping cream.

Whichever cream you decide to use, make sure you keep an eye on it as cream is easy to overwhip. It can change from liquid to butter in seconds so you definitely need to watch it.

I prefer to whip cream on a low speed so you can hopefully see when it is about to change easier.

I wouldn’t use single cream for this recipe as you won’t get the volume needed.

Make sure you let the flour, water and butter mix cool for at least 15 minutes before adding the eggs. If the mixture is too hot the eggs will start to cook which isn’t what you want!

Don’t panic if your choux pastry looks a little strange when you start adding the eggs. Just keep mixing and it will come together just fine.

After you have baked the choux buns for 25 mins, cut them open. If they still seem a little stodgy inside, just put them back in the oven for a further 5 minutes with their lids off so they can dry out.

Personally, I think that gluten free choux pastry is harder to pipe than standard choux. Well this is what I tell myself because I struggle to pipe it as neatly!

It really doesn’t matter if you aren’t the best at piping. Choux Buns are allowed to look rustic! Plus you’re covering them in Nutella later so don’t stress yourself out about perfect piping.

Don’t panic, you can still make these beauties!

Just add the mixture to a sealable sandwich bag. Squeeze the choux pastry to one of the corners and snip it off so you have a hole approximately 1cm wide. Then you can just squeeze the choux out as normal.

If you do have a piping bag, but not a round nozzle, just snip the end of the bag off.

How long will these choux buns keep for?

Choux buns are usually best eaten on the day they are baked. Keep them in an airtight container in the fridge and they will keep to the next day.

If you would like them to last longer, you can freeze them once they have cooled for up to three months.

For the choux pastry

For the filling & topping

Choux buns are best eaten on the day they are baked, if not the day after.

Nutritional information is given as a guide and may vary.