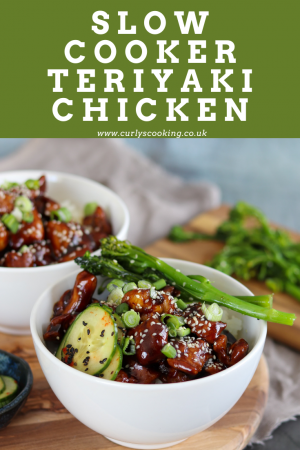 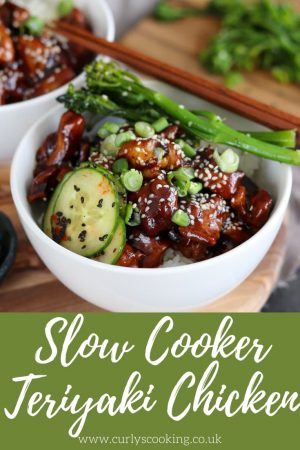 Teriyaki is a traditional Japanese marinade or glaze used to flavour meat or fish. ‘Teri’ means to glaze and ‘yaki’ means to grill/cook.

Although teriyaki traditionally refers to the style of cooking, it is more commonly associated with the sauce.

It has a salty sweet taste from the mirin and soy sauce used and is brilliantly glossy.

Slow cooker recipes are so popular, but they don’t all have to cook for hours.

It is commonly thought that slow cooker recipes take hours and hours to cook. However this isn’t always the case!

This Slow Cooker Teriyaki Chicken can be cooked for 2 hours on high or 4 hours on low. You don’t have to put this in the slow cooker before you go to work.

You can put it all in when you get home; go and walk the dog, go to the gym or whatever else you do and then have this ready to eat when you’re finished.

Teriyaki Chicken is something I have always liked but never actually made myself. Well I have made it using a jar of sauce in the past, but I’m pretty sure we can’t count that!

I assumed that it would be easier to buy a jar rather than make the sauce myself, but I was wrong.

It really is as simple as combining a few ingredients and then your sauce is ready to go! It couldn’t be easier.

What makes up teriyaki sauce?

Teriyaki sauce is made up of a few simple ingredients that are easy to find in most large supermarkets. I would check the world foods aisle as you may be more likely to find them there.

Personally I prefer to buy the ingredients from my local Asian supermarket because they usually have a larger range of products and can be a bit cheaper.

I used a recipe by Woks of Life as a base for my Slow Cooker Teriyaki Chicken to get the ratios of my sauce right. I tweaked it by adding the honey and adapted it for a slow cooker.

I prefer to use boneless, skinless chicken thighs for this Slow Cooker Teriyaki Chicken. This is the more traditional cut of chicken to use.

I think that chicken thighs have more flavour than chicken breasts and are more moist which means they are less likely to dry out.

You can definitely use chicken breasts instead, whichever you prefer.

The chicken also doesn’t need to be cut up, you can leave the thighs or breasts whole if you would prefer.

What people consider ‘healthy’ varies from person to person. This Slow Cooker Chicken Teriyaki isn’t a recipe that is particularly healthy but as with all food, it should be enjoyed as part of a balance diet.

It is absolutely delicious so you definitely should give it a try!

How to serve this Slow Cooker Teriyaki Chicken

My preferred way of serving this Teriyaki Chicken is with sushi rice. After eating this with nearly every meal when we went to Japan I have become a little obsessed with it.

It is now my go-to rice to serve with any Japanese or Chinese dishes.

I also like to serve it with some steamed tenderstem broccoli and my cucumber salad.

Can I freeze this slow cooker teriyaki chicken?

Yes you can, but believe me you will want to eat the lot!

If you are freezing it, make sure you put any leftovers in the freezer within two hours of it finishing cooking. Once frozen, eat within three months.

To defrost, leave it in the fridge for eight hours. I prefer to reheat on the hob where you can add a splash of water if the sauce is too thick. Make sure the chicken teriyaki is piping hot before serving.