Once you’ve made my Baked Sweet & Sour Chicken you will never use a jar again! It is simple, delicious and you’ve probably got most of the ingredients in your cupboard already.

Making your own Sweet & Sour is much better than using a jar!

I’ve never been a fan of sweet and sour sauce from a jar. Apart from it tasting quite artificial in my opinion, I also don’t like the chunks of onion it has in it.

Once you have made my Baked Sweet & Sour Chicken, I don’t think you will reach for a jar of sauce again. You know what is going into this sauce, there are no nasty preservatives and it really doesn’t take much effort at all.

You could even skip the baked chicken stage and just brown the chicken in the pan before adding the sauce ingredients if you want to make it even quicker.

Baking instead of frying

I can’t order a takeaway every time I fancy sweet and sour so I had to come up with my own recipe. I first started making my own sweet and sour back in my first year of uni.

Zoe; my foodie friend that you’ll know if you’re a regular to my blog, and I used to make a big batch of sweet and sour to freeze for quick a quick meal.

Back at uni, we used a recipe that called for some deep frying action which although made the pork lovely and crisp, this effort seemed a little pointless because it softens when you add it to the sauce later.

It was also the most time consuming step of the recipe as well as making it a bit unhealthier. So in my version I skipped this step and instead bake the chicken.

Baking the chicken gives the chicken the crisp exterior but without the extra hassle and calories. 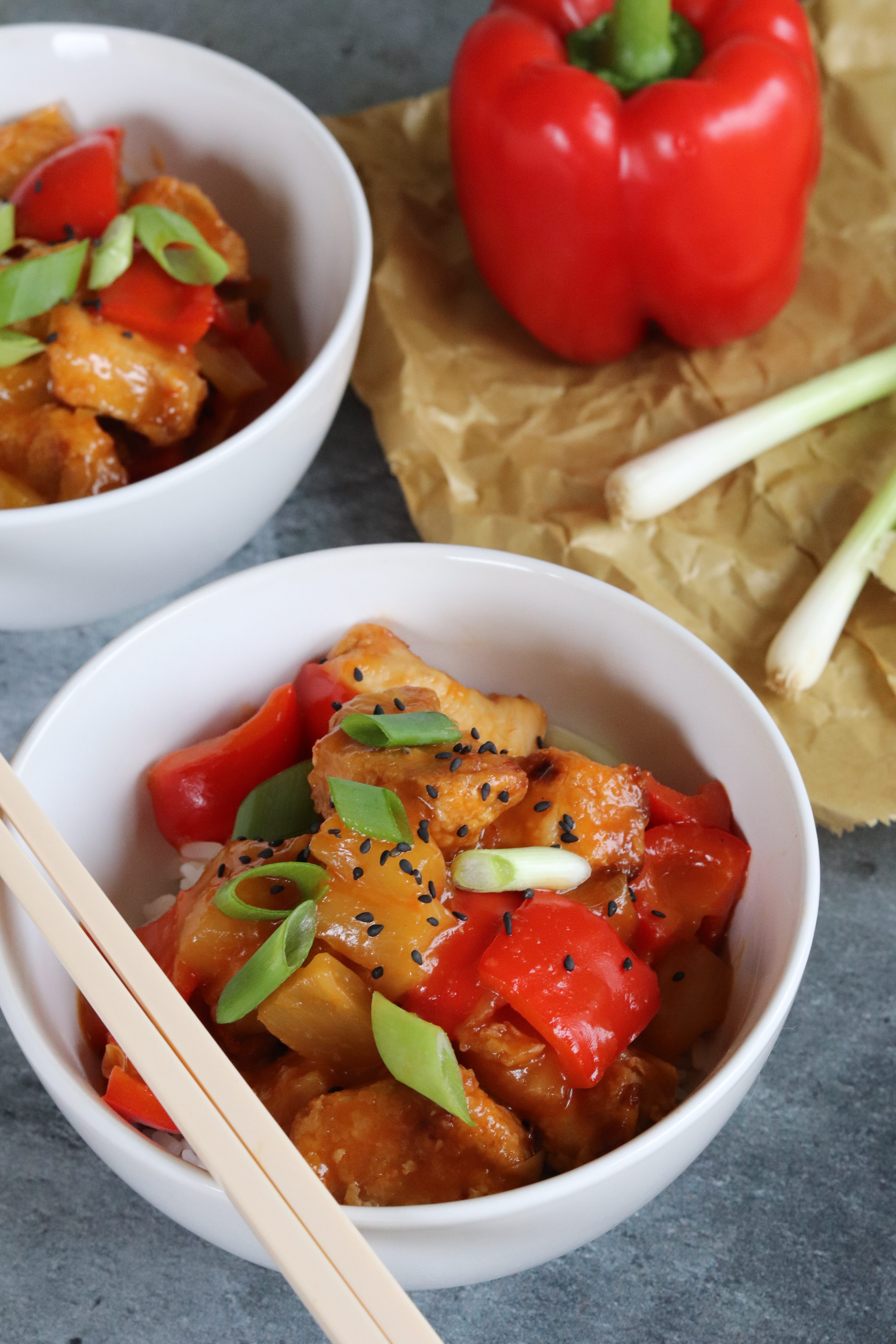 I recommend adding the baked chicken just before you are ready to serve.  This will help keep the chicken at its crispest. You can definitely freeze this dish, but bear in mind the chicken will loose it’s crispiness but still be tasty.

You don’t have to use chicken, pork also works really well and is actually what I used when I started making sweet and sour. I would recommend pork shoulder or leg as they have a bit of fat marbling to keep the meat moist while cooking.

I’ve used spring onions because I much prefer these, but if you want to dice up some normal white onion then please do. You can also use whatever colour of peppers you like.

Once you've made my Baked Sweet & Sour Chicken you will never use a jar again! It is simple, delicious and you've probably got most of the ingredients in your cupboard already.