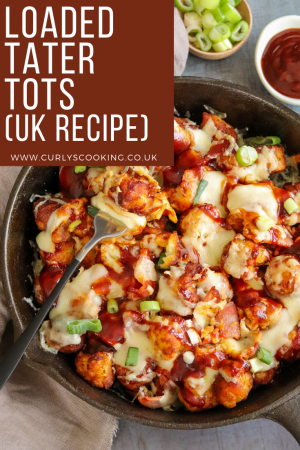 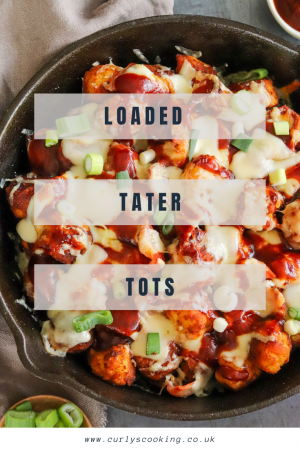 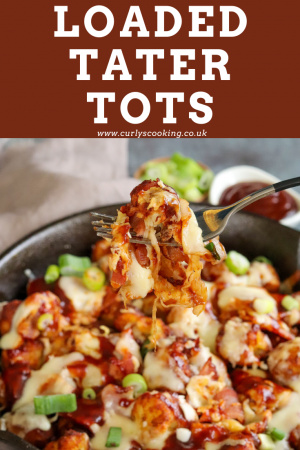 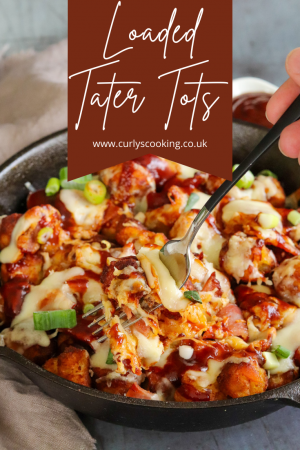 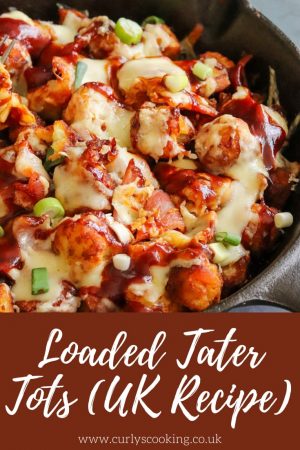 These American style Loaded Tater Tots are simply mini hash browns smothered BBQ sauce, cheese and bacon. They are a decadent and delicious addition to a meal or great by themselves.

what are tater tots?

If you live anywhere apart from the US, you may have no idea what a tater tot is. They are grated potato formed into small cylinders. Although ‘tater tot’ is a registered trademark for one specific company, it is used as a generic term.

Here in the UK you won’t find ‘tater tots’ in the supermarkets. However you will find hash browns which are basically tater tots formed into a larger, usually triangle shape.

In recent years, supermarkets have started stocking mini hash browns. These are almost identical to tater tots and perfect for this recipe.

So here is my Loaded Tater Tot recipe using British ingredients you’ll find in the UK. They’re too tasty for only people in the US to make them!

where to buy mini hash browns/tater tots in the uk

The mini hash browns I buy are from Morrisons. They look as close to an American tater tot as I think you’ll find in the UK. An advantage of them is that they are naturally vegan and gluten free.

I have also seen mini hash browns available from Asda and Ocado. Their shapes might be slightly different but they will work just as well.

If you can’t find mini hash browns you can absolutely use standard ones and either leave them whole or cut them into pieces once they are cooked.

use this recipe as a guide only

This recipe is more of a rough guide than one that has to be stuck to word for word.

Cheese and bacon are ingredients that should be measured by your heart. I have included quantities below but feel free to use more or less.

You could definitely go crazy with the amount of toppings you add and make these fully loaded tater tots.

Also feel free to change up the ingredients. Add some sautéed onions, mushrooms or peppers. Jalapenos would also add a nice kick.

Usually when I add bacon to a recipe I have a preference. For these tater tots, it really doesn’t matter which bacon you use.

Back bacon, streaky bacon or bacon medallions would all work well. Use whichever you usually buy.

I used bacon bacon, but if you are using streaky bacon or medallions you may want to use more than five rashers as they can be a little smaller. But that is up to you.

I will always recommend using smoked bacon, but if you want to break my heart and use unsmoked you definitely can.

If you don’t eat pork, you can absolutely use turkey bacon or a vegetarian alternative.

which cheese is recommended to use?

I like to use two different types of cheese for these tater tots. Most of the cheese I use is cheddar because it has a lovely flavour and melts well.

Personally, I like to use extra mature because of it’s slightly salty taste, but use whichever you like.

In most instances I would recommend using a fresh ball of mozzarella; but this isn’t one of them. Fresh mozzarella has more moisture which could risk your tater tots becoming less crisp.

Instead I would use grated mozzarella or slices of mozzarella. These have less moisture so will help to keep your tater tots nice and crisp.

how to make loaded tater tots without an air fryer

You can absolutely make this recipe without an air fryer. You can also make them completely using an air fryer and without the oven too.

If you don’t have an air fryer, cook the bacon either on the hob or in the oven. Then cook the tater tots in the oven at 190°C for 15 minutes or until they are deep golden brown.

I like to cook my tater tots so they are more crisp than if I wasn’t adding toppings. This is so they stay nice and crisp when all of the toppings are added.

Also if you want to make it all in the air fryer without using the oven, you absolutely can do this. I transfer the tater tots to an oven proof dish before adding the toppings and putting them in the oven because I don’t want to lose any toppings in the air fryer basket.

But you could definitely just add all of the toppings to the tater tots and put the air fryer on for 2-3 minutes until the cheese is melted. Just keep an eye on it so the cheese doesn’t get too brown.

how to make these gluten free, vegetarian or vegan

These Loaded Tater Tots should be very simple to adapt. The mini hash browns I used were naturally gluten free and vegan, but always check the ingredients.

You can either choose to completely leave the bacon out to make these vegetarian and vegan. Alternatively you can use a meat free bacon alternative.

Most BBQ sauces tend to be gluten free and suitable for vegetarians. They may also be suitable for vegans but if they don’t specifically state it, I am never completely sure checking the ingredients. Obviously if you are vegan, you will know which is suitable.

If you are using grated mozzarella, check the back of the packet to check it is gluten free. The cheese is usually tossed in potato starch which is gluten free, but it is always worth checking.

To make these tater tots vegan, you will need to swap the cheeses for dairy free alternatives.

how many people will these loaded tater tots serve?

How many people these tater tots serve depends how you are serving them and how big your appetite is.

If you are just having these tater tots as a meal I’d say they would feed 2-3 people. If you’re serving them as a side dish with something like a burger, I would say 4-6 people.

As I said, it all depends how big your appetite is. But this recipe is super easy to either scale up or down to feed more or less people.

These American style Loaded Tater Tots are simply mini hash browns smothered BBQ sauce, cheese and bacon. They are a decadent and delicious addition to a meal or great by themselves.