What is a new york cheesecake?

A New York Cheesecake is made using cream cheese and either soured cream or double (heavy) cream. Some varieties include a sour cream layer which is applied once the cheesecake has baked.

These ingredients create a decadent rich and creamy cheesecake that is also dense in texture. This is what we love to much about a New York Cheesecake.

New York Cheesecakes are usually simple with their flavourings with subtle vanilla and lemon being the only additions. The simplicity and dense texture of this cheesecake make it irresistible.

New York Cheesecake is Mr Curly’s favourite sweet treat. He’s not one for cakes but give him a slice of this cheesecake and he is a very happy man.

I first made this cheesecake for him roughly 3 years ago for his birthday. I still lived at home so I was able to use all of my Mum’s baking equipment which was far better than the basic equipment I had at uni.

For some reason, I managed to get myself incredibly flustered and stressed making it. Mr Curly loved it but I vowed that I would never make it again.

Two years ago, Mr Curly and I moved into our flat together. It was the week of his birthday so thankfully there was no mention of the dreaded cheesecake. So that brings us to this year, I had no excuses; the cheesecake had to be tackled.

When I came to find the recipe on the BBC Good Food website, I remembered why I hated the cheesecake; it was the badly written recipe, not the actual cheesecake. I knew then that I would rewrite the recipe to help myself, but hopefully make it easier for others too.

Read the recipe before you start

As with all recipes, I really recommend reading the recipe all the way through before you start.

The recipe does have a few steps, but when you read the recipe in full first and understand the steps, you will have no problems at all. You also then know what to expect further in the recipe so shouldn’t have any surprises.

Also if you don’t read the recipe all the way through you will probably miss the part about leaving the cheesecake to chill for eight hours or overnight before adding the topping!

Personally I don’t think cheesecakes are the easiest desserts to make so I would definitely recommend reading this all the way though so you know what is expected.

Do I need any specific equipment to make this New York Cheesecake?

This recipe is definitely made easier if you have a mixer in my opinion. It does so much of the work for you that you can concentrate on the next step while it does it’s thing.

You can definitely still make this cheesecake without a mixer. As I have said before, just read the recipe fully make keep organised.

Don’t worry if your cheesecake cracks

But don’t panic if yours does crack because the topping will cover it so no one will ever have to know whether yours cracked or not!

One of the most popular recipes on my blog

Not only is it Mr Curly’s favourite, it is also one of the most popular recipes on my blog with so many people having made it. I love hearing when people have made my recipes and also how they have tweaked them.

One of my favourite tweaks was when someone served this New York Cheesecake with a raspberry coulis. This would go really well with the richness of the cheesecake and add a delicious sharpness.

I have been making this cheesecake for years, and as you can see I have made some tweaks along the way. I am now happy that I have got this cheesecake exactly as I’d like it.

The annual cheesecake making happened again! After last year I have tweaked the recipe slightly, definitely for the better. Mr Curly loved the cheesecake as always, but said that if the base could be slightly thicker and less lemon then it would be perfect.

From his comments, I increased the biscuit base and reduced the lemon and it was far better.

It’s that time of year again and after a couple of year’s of getting away without making this New York Cheesecake; this year it couldn’t be avoided. This year Mr Curly said it was the best ever. I don’t know whether that is simply down to me using a food processor to crush the biscuits!

It also gave me the opportunity to update my photos this year. I still haven’t worked out how to remove the bottom of the tin and the parchment paper from the cheesecake before serving though. Please let me know if you have in the comments below!

How long can you keep this new york cheesecake for?

This cheesecake will keep in an airtight container in the fridge for up to four days. However I really don’t think it will last that long! Especially if you live with someone like Mr Curly! 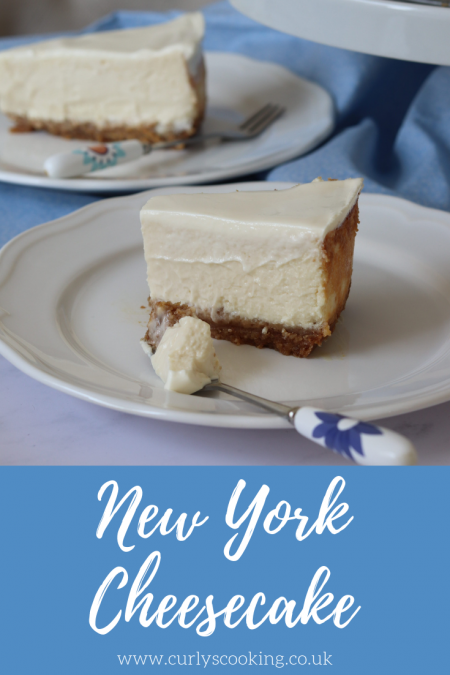 Letting your cheesecake cool in the oven is meant to reduce the likelihood of it cracking. As you can see, mine has cracked this time – sometimes it does, sometimes it doesn’t. But don’t panic if yours does crack because the topping will cover it.

I serve my cheesecake on the base of the tin because I am too scared to try and get it off the tin and remove the parchment paper!