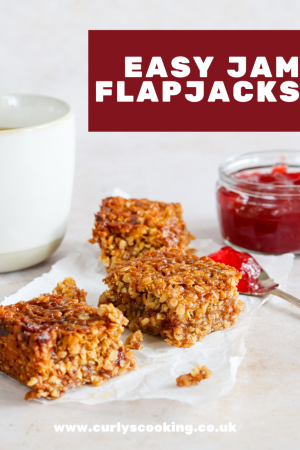 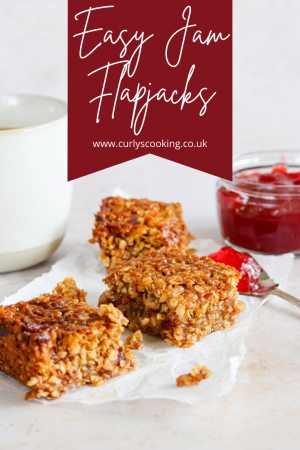 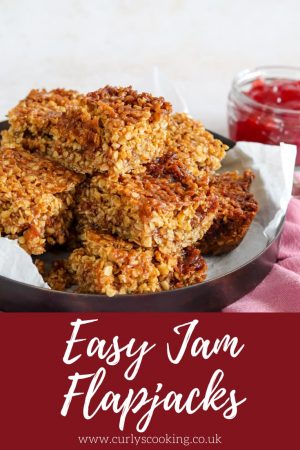 Soft, delicious flapjacks with a layer of tasty jam. If that hasn’t made you want to make these Easy Jam Flapjack, the fact that they are so simple to make should!

What are Jam Flapjacks?

As their name may suggest, these flapjacks are a delicious flapjack recipe with a tasty jam filling.

I love making flapjacks because of just how easy they are to make. These Jam Flapjacks are something a bit different from classic plain flapjacks and without using the popular choice of chocolate chips.

If you’re not from the UK, you might not be familiar with what we refer to as a flapjack. They are baked oat bars usually involving golden syrup and rather a lot of butter!

They are similar to cereal bars, granola bars or oat bars. These may be more commonly found where you are from.

I also found out that flapjack is a term given to pancakes in America and Canada. If you have come here looking for a pancake recipe then you might be a little confused!

Just how easy are these  Jam flapjacks to make?

When I say easy, I really do mean easy! There is no fancy equipment involved, literally melting and stirring. This makes these flapjacks perfect for children to help with, but also great for unconfident bakers.

I love baking, but sometimes I really can’t be bothered to use my mixer. Now this sounds weird because mixers make baking easy as you aren’t having to use muscle power.

But for me its the washing up that I don’t look forward to!

That is why with recipes like this that just require some gentle stirring are so great.

Do you prefer Soft or crisp flapjacks?

That is one of the most important questions when talking about flapjacks. I am 100% team soft flapjack.

These Flapjacks are deliciously soft apart from the outside edges that are slightly crisp. If you are strictly team crisp flapjack and need more than the edges to be crisp, bake them for five minutes longer.

If you’re a flapjack fan, make sure you try my Apricot & Almond Flapjacks too!

Which oats should be used for these flapjacks?

The most readily available oats in supermarkets tend to be rolled oats, porridge oats and jumbo oats.

Jumbo and rolled oats are a little larger and will provide a crumblier texture. Porridge oats will make a denser flapjack which is what I like.

I use porridge oats to try and ensure minimal crumbling when I cut the flapjacks. But please feel free to use the other varieties.

Flapjack purists might disagree with me, but I don’t think any oats will result in a bad flapjack.

Why add jam to flapjacks?

When I was at school, I had a weekend job in retail. On my lunch break I would often walk to Boots to get a meal deal. This frequently involved a flapjack with jam in the middle.

Fast forward ten years (or so…) and I thought it was about time I recreated these my version of a jam flapjack.

Which jam is best to use?

These flapjacks are so great because you can use whichever flavour jam you like. It also changes the flavour of the flapjacks so although it is the same recipe, you can really change it up.

There is absolutely nothing wrong with using shop bought jam. I would recommend trying to buy a better quality jam if possible. The higher fruit content the jam has, the tastier it tends to be.

You can of course make your own jam for extra tasty flapjacks. Here are some recipes you might like to try:

How long will these flapjacks keep?

These Easy Jam Flapjacks will keep in an airtight container for up to a week.

According to Mr Curly, these get better each day. They become slightly softer and chewier and each day after baking. He prefers this as he is definitely in the softer flapjack camp.

I have sent him to work with one for the past few days and each day he comes home telling me that they were even better than the day before.

So if you prefer a softer flapjack and can resist eating them all on the day you bake them, leave them for a day or so for maximum yumminess!

If you want to make these Apricot & Almond Flapjacks gluten free, make sure the oats you buy state that they are gluten free.

Although oats are naturally gluten free, some are prepared in factories that deal with gluten.

How many flapjacks does this recipe make?

That really does depend on how big you want to cut them!

I like to cut these into 24 squares because for me they are the perfect size when you want a sweet snack.

If you are making these for children, you could cut them into smaller pieces quite easily. They make a great addition to lunchboxes.

Soft, delicious flapjacks with a layer of tasty jam. If that hasn't made you want to make these Easy Jam Flapjacks, the fact that they are so simple to make should!