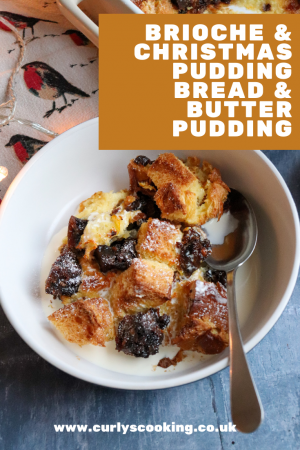 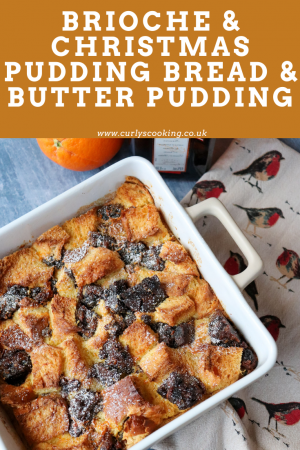 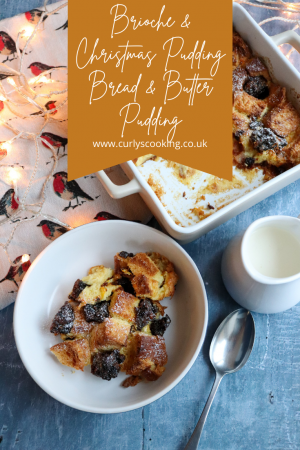 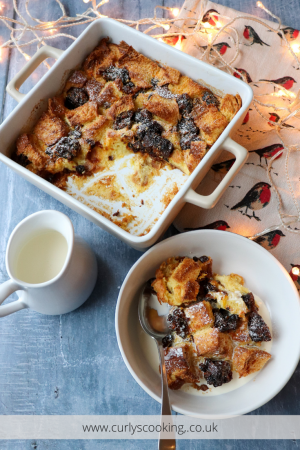 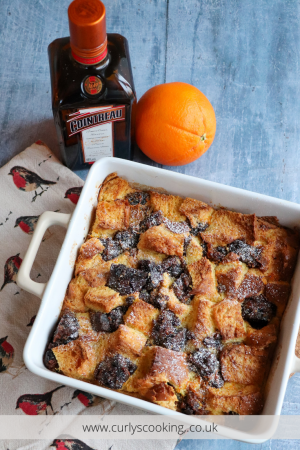 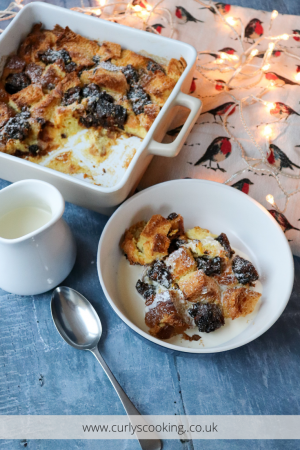 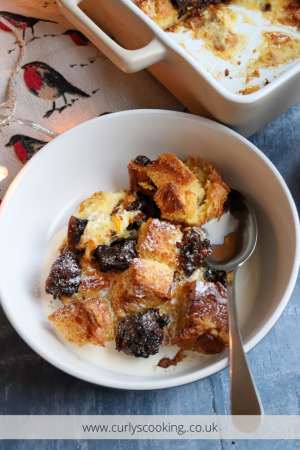 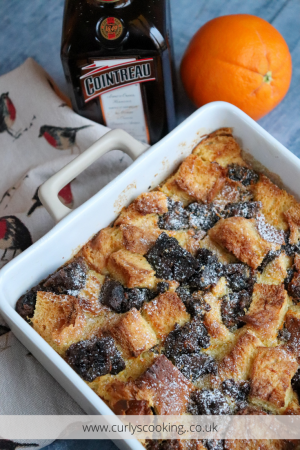 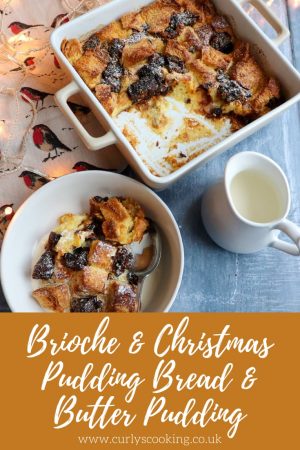 Soft delicious custard soaked brioche with tasty Christmas Pudding with crispy edges. Once you have eaten this Brioche & Christmas Pudding Bread & Butter Pudding, you will struggle to eat bread and butter pudding any other way again. 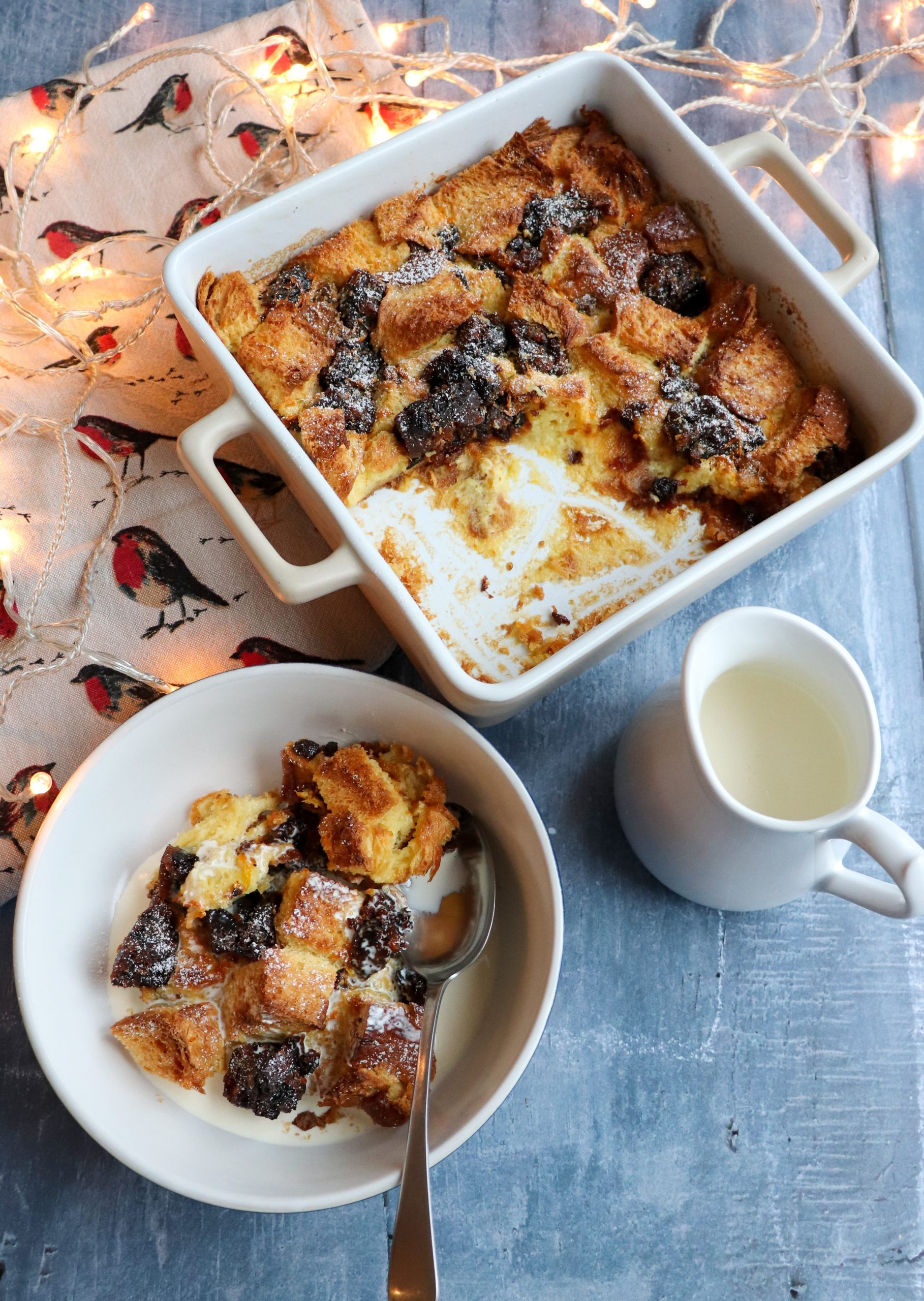 What is bread and butter pudding?

Bread and butter pudding is a traditional British dessert. It is layers of buttered bread usually scattered with raisins and covered in an egg custard.

This is then baked in the oven with the top getting slightly crisp and the underneath deliciously gooey and creamy.

It is such a well known and loved recipe here in the UK, but that doesn’t mean it shouldn’t be tweaked! 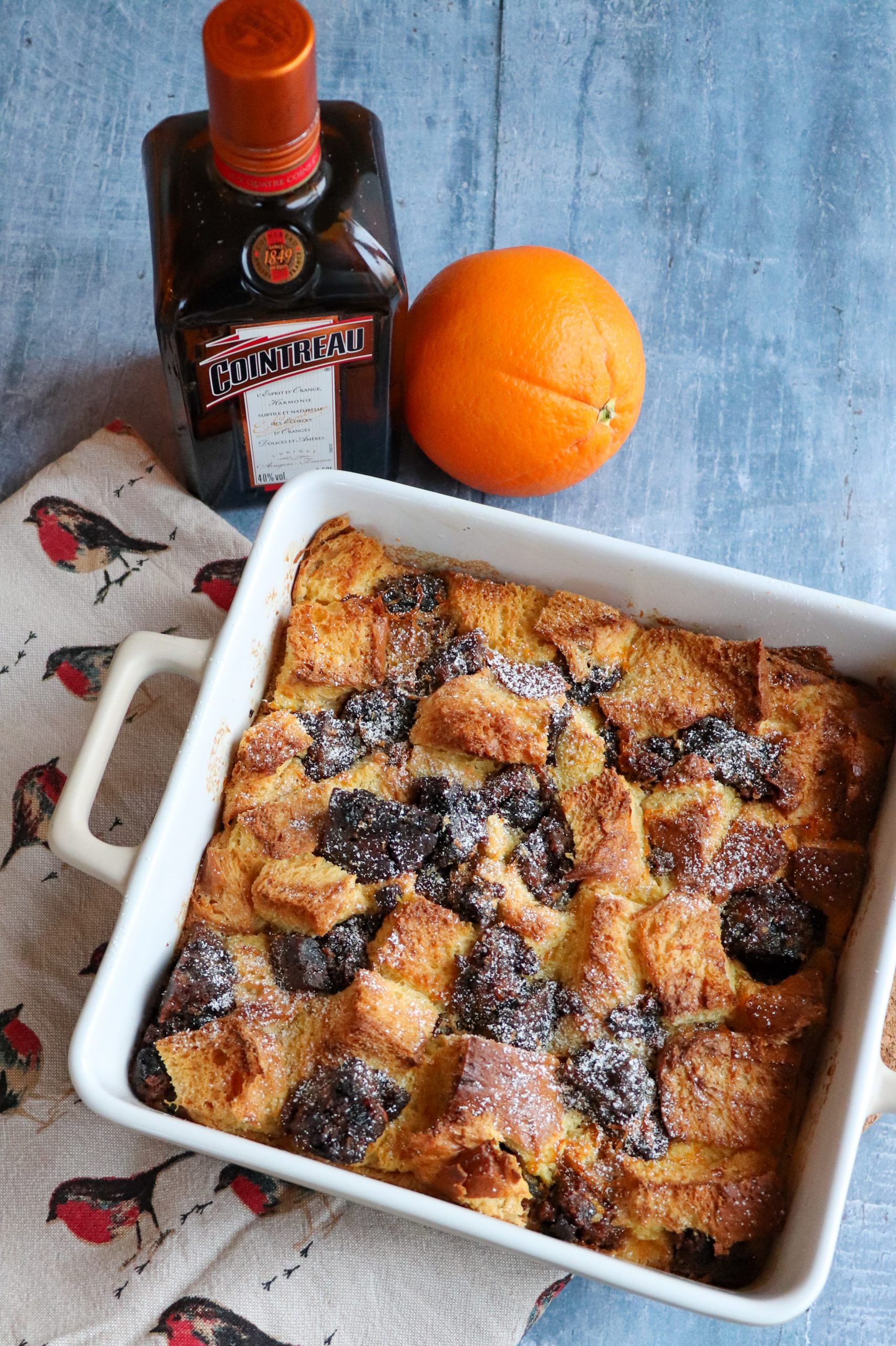 What is Christmas pudding?

Obviously you can buy all sorts of different Christmas puddings from the supermarkets which you can handily heat in the microwave. 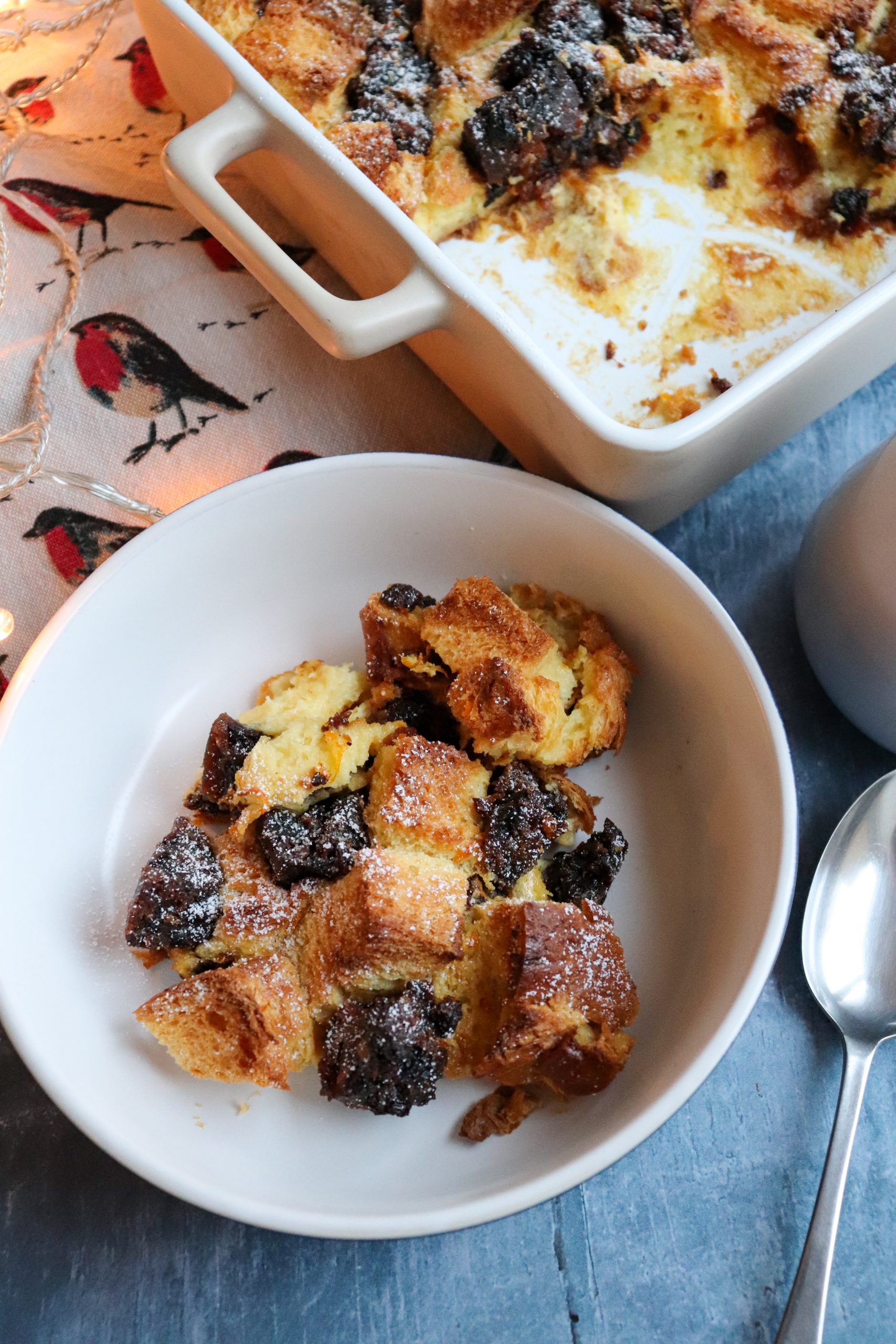 This recipe is one of my absolute favourites that my Mum made every New Year’s Day. She’d made her delicious Honey Glazed Ham followed by this Brioche & Christmas Pudding Bread & Butter Pudding. It was definitely a meal we all loo forward to all year.

She found the inspiration for this recipe in a Sainsbury’s Magazine years ago and tweaked the recipe from the original Panettone version to be the one we know and love today using brioche, Cointreau and orange zest. 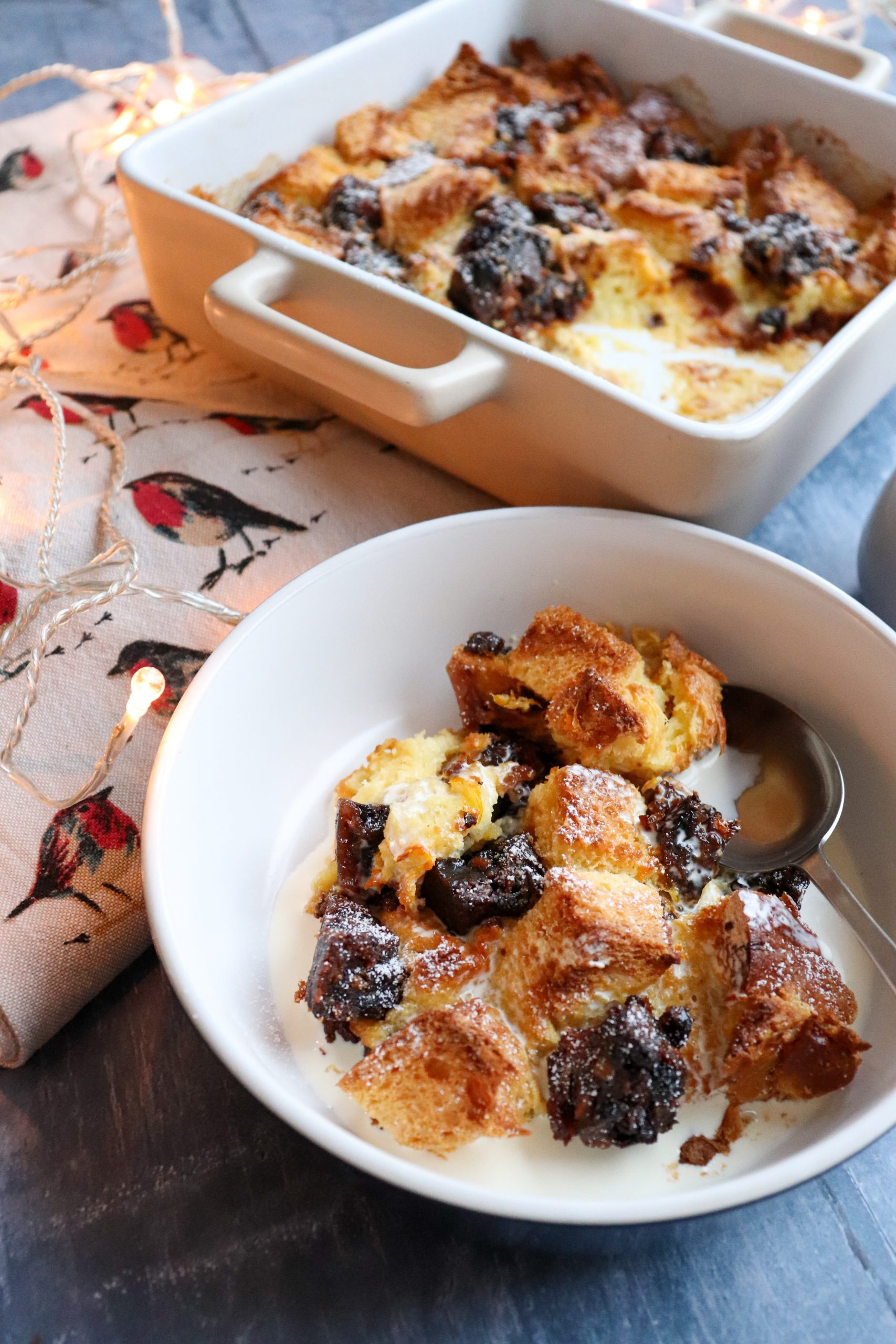 Which brioche is best to use?

I use a brioche loaf that you can buy in most large supermarkets for this Brioche & Christmas Pudding Bread & Butter Pudding.

If you can’t find the loaf, most supermarkets also sell the small snack sized loaves which you could use.

I would avoid the chocolate chip brioches unless you are using a chocolate Christmas pudding (they do exist!). 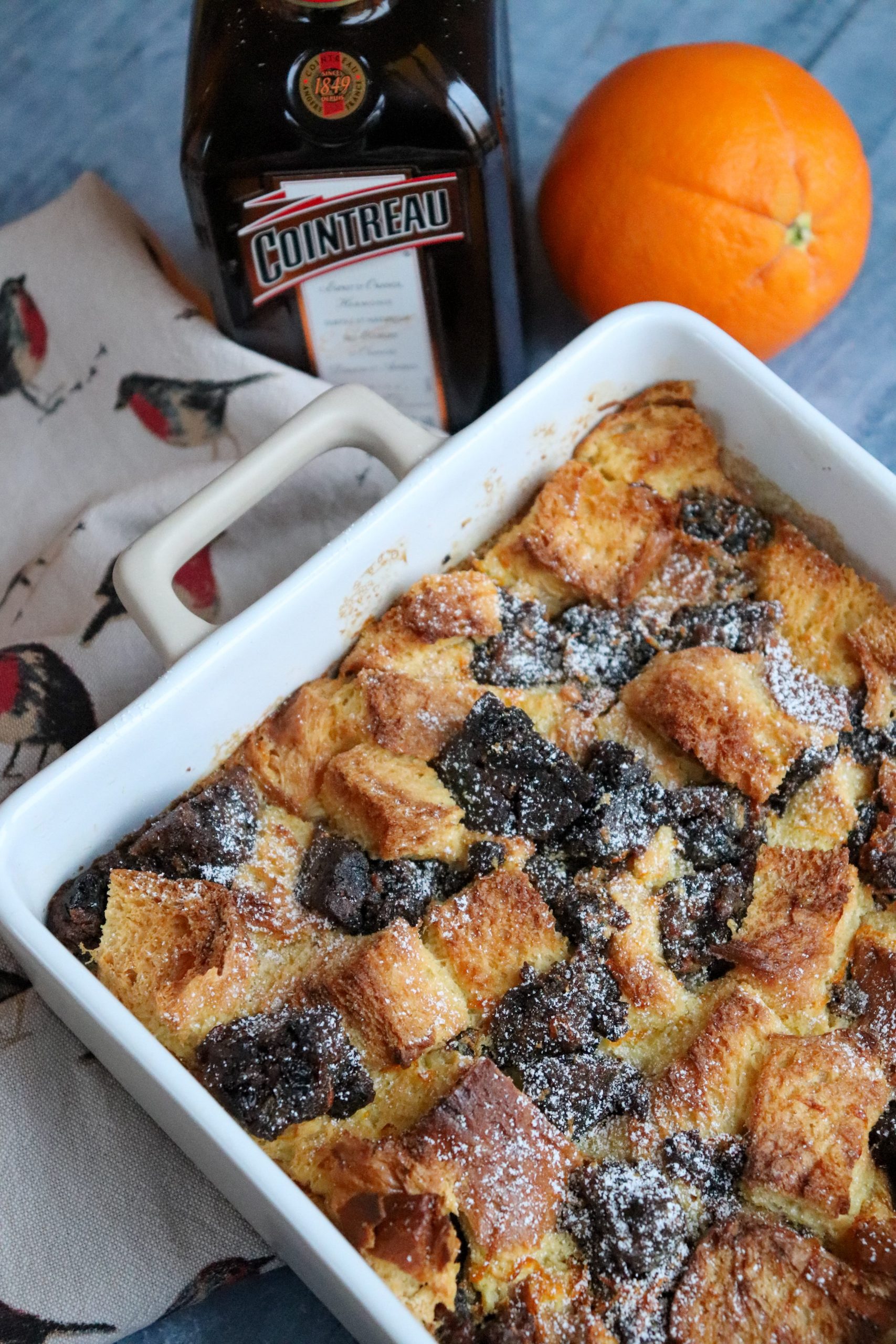 Which Christmas Pudding is recommended?

There are so many different Christmas puddings out there these days. Lots of slightly different flavourings and sizes.

Pick whichever one appeals to you. Personally, I prefer to pick a Christmas pudding that doesn’t have nuts in it even though I do like nuts. So it really us about personal preference.

Either homemade or shop bought Christmas puddings would work for this bread and butter pudding. 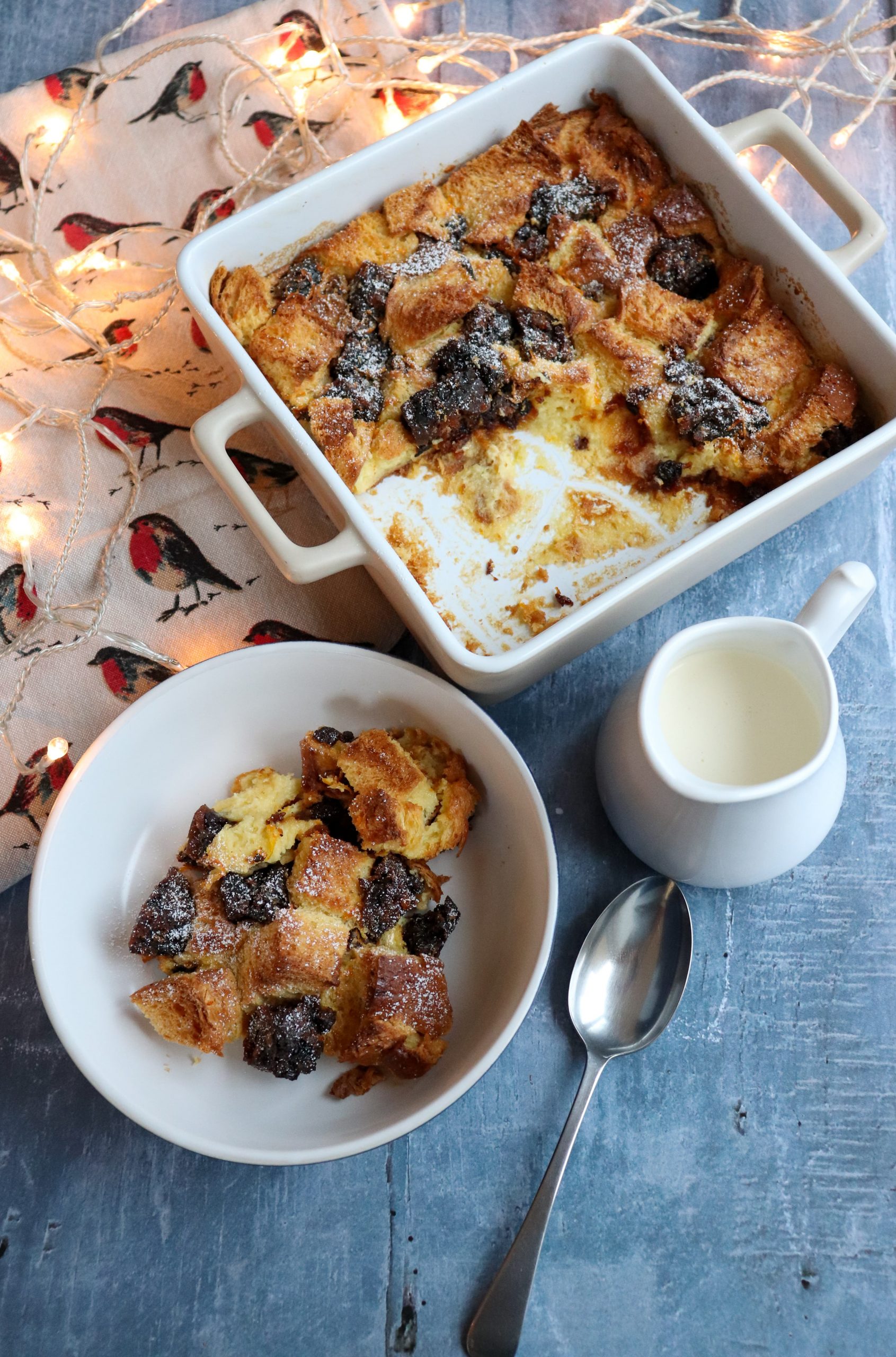 Apart from my Dad, none of my family are big fans of Christmas pudding. We rarely eat it on Christmas Day, or the days after. But we all love this bread and butter pudding.

I would definitely recommend giving this a go if you’re not the biggest fan of Christmas Pudding. I really think you will like it. 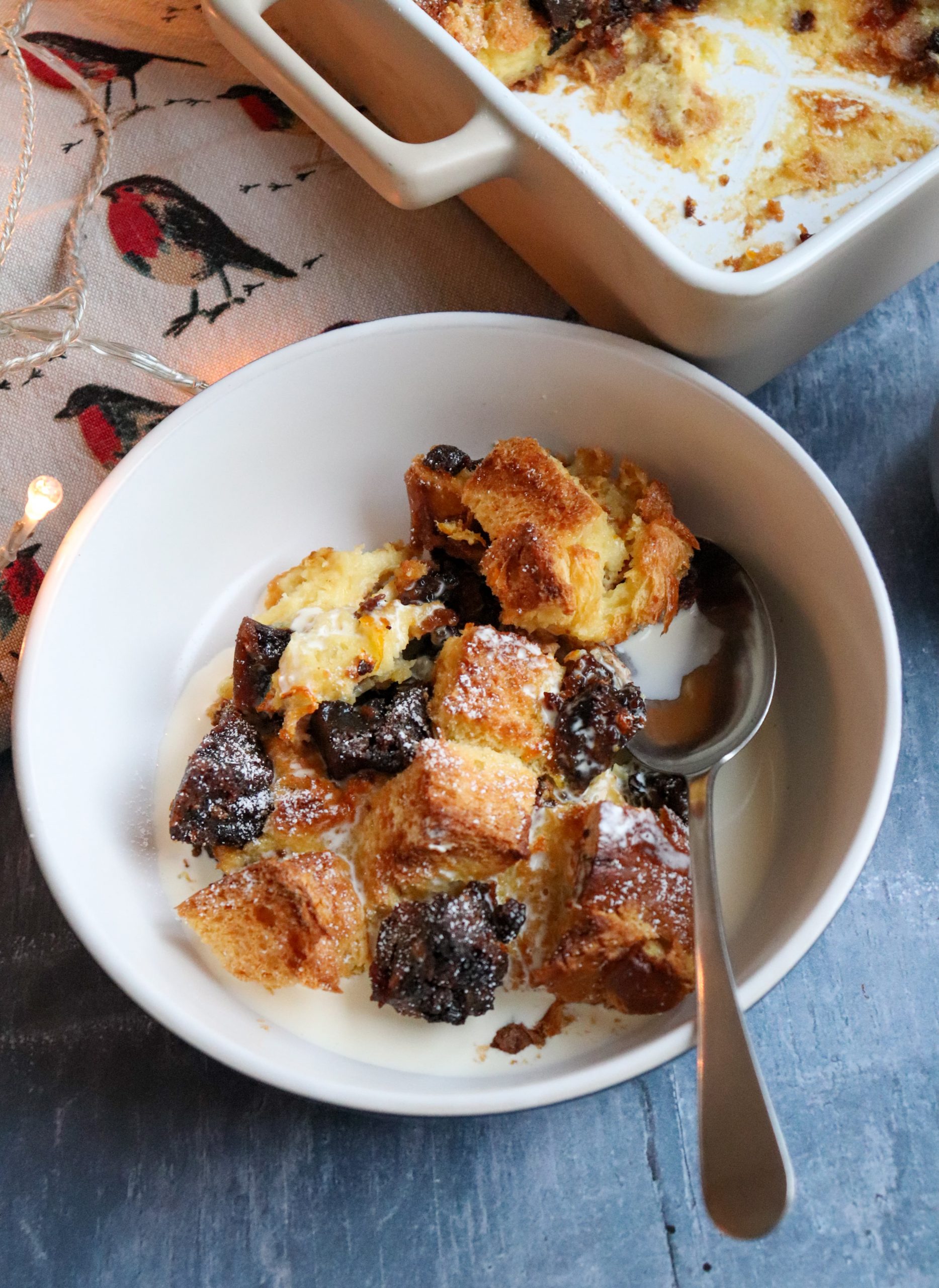 Orange is such a festive flavour to me and it works so well in this Christmas Pudding Bread & Butter Pudding.

If you didn’t want to use Cointreau then you could either leave it out or use orange juice instead. 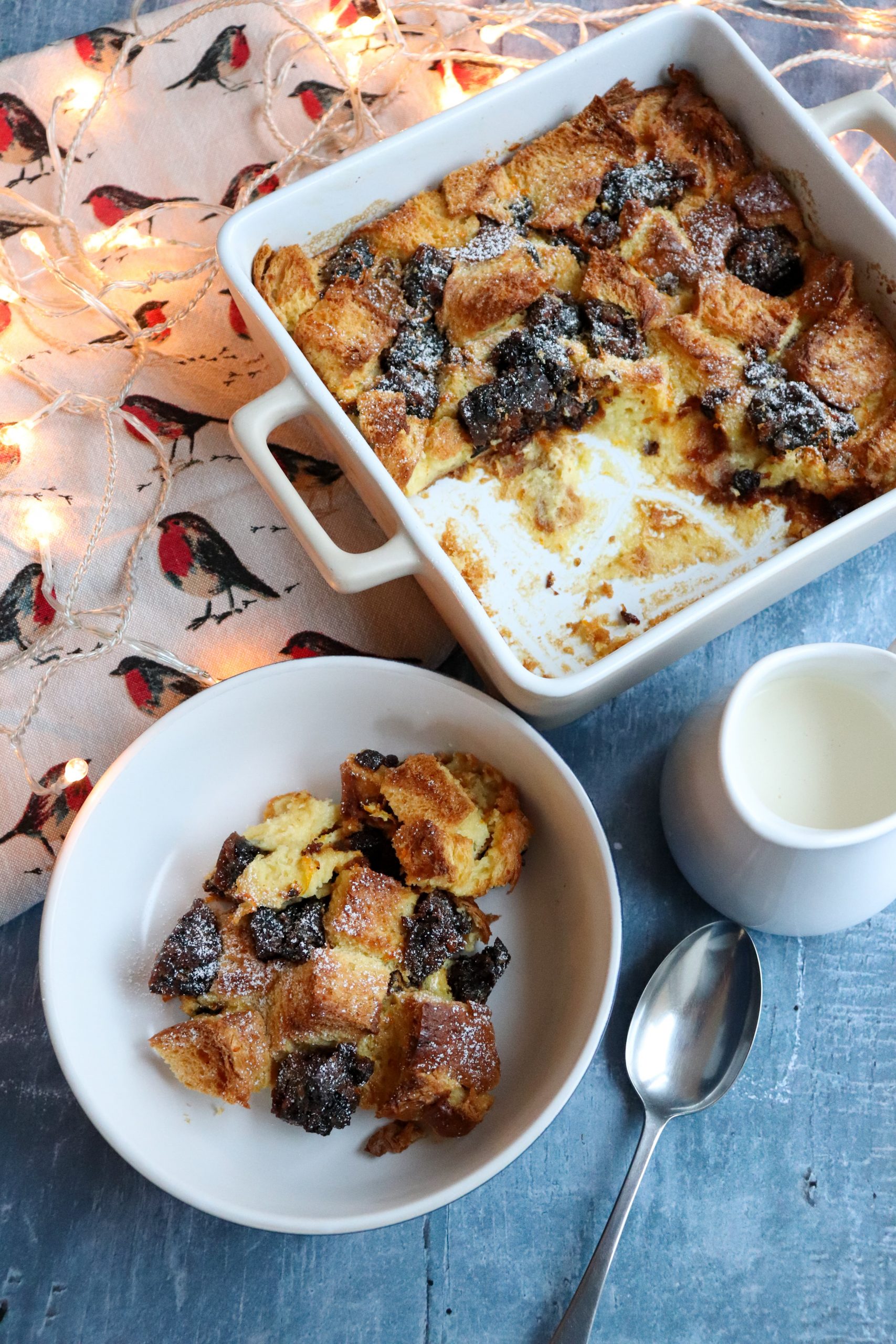 I have been known on more than one occasion to eat any leftovers for breakfast the next day. At Christmas you can get away with eating pretty much anything for breakfast so I take full advantage of this.

You can heat it up again in the oven or just use the microwave which is what I do. This still keeps the crispy bits of the brioche crisp.

This Bread & Butter Pudding will keep for 2 days in an airtight container in the fridge. 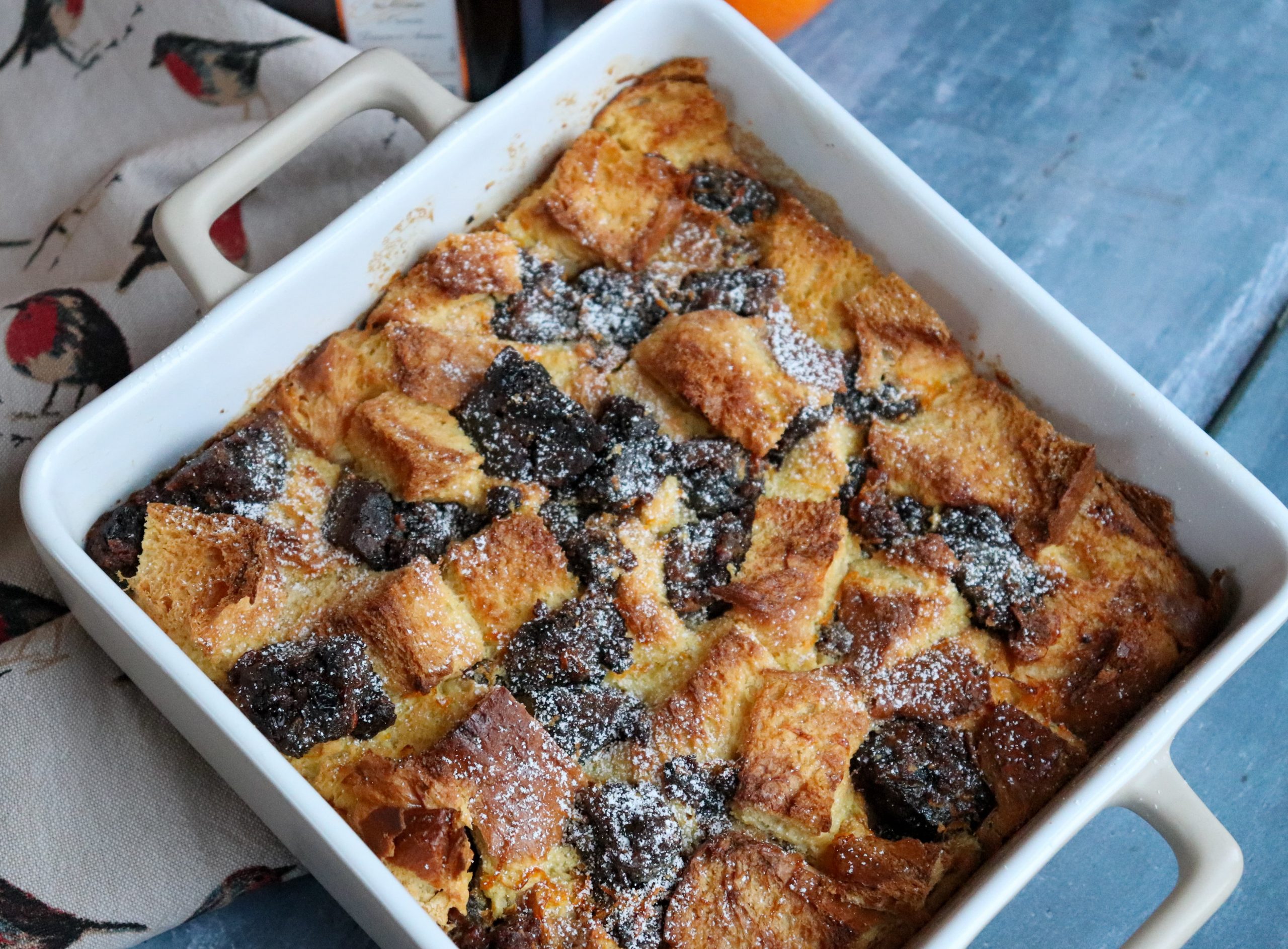 Can this be made gluten free?

Yes it can be. You only need to make a few swaps to make this Christmas Pudding Bread & Butter Pudding gluten free.

Firstly make sure you buy a gluten free Christmas Pudding. And then use gluten free brioche. These might be rolls, but this is fine because you are cutting it into chunks anyway.

How to serve this Christmas Pudding Bread & Butter Pudding

My preferred way of serving this is with lots of double cream; and I mean lot of. Double cream is a glorious thing and should never be used sparingly in my opinion!

You could also serve it with Homemade Custard, Brandy Butter or even ice cream. It’s Christmas – be indulgent! 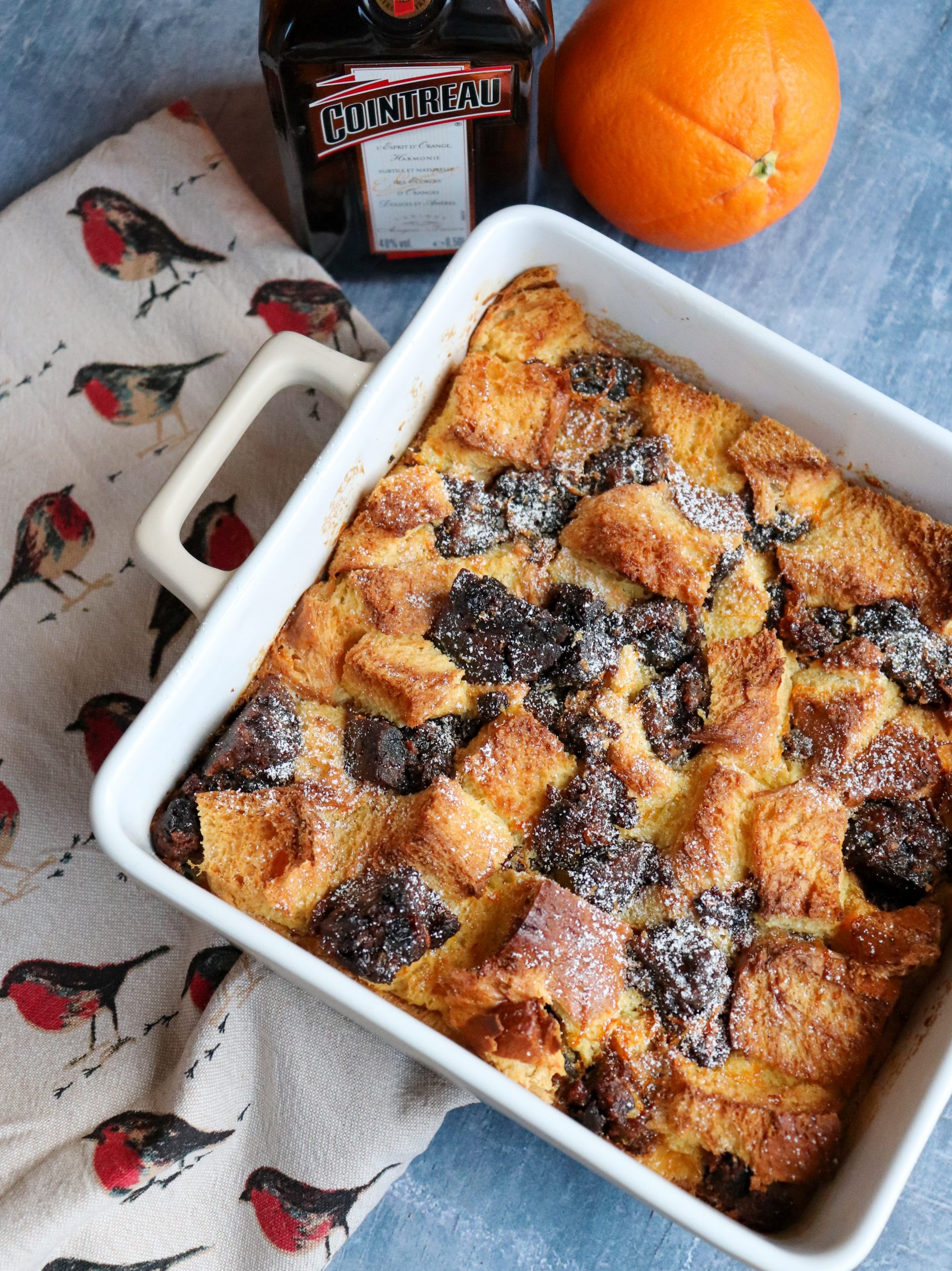 Soft delicious custard soaked brioche with tasty Christmas Pudding with crispy edges. Once you have eaten this Brioche & Christmas Pudding Bread & Butter Pudding, you will struggle to eat it any other way again.

Keep the pudding in the fridge for 2 days. Reheat in the microwave until piping hot.