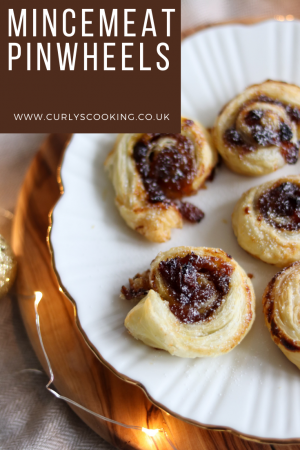 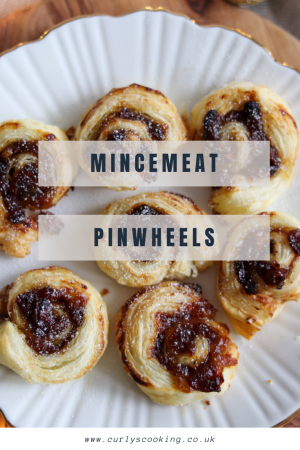 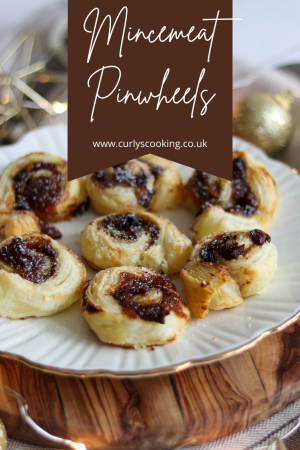 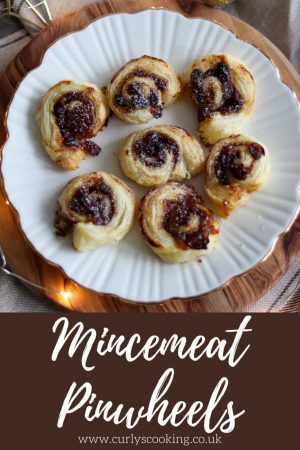 Mince pies but without all of the cutting and assembling. My Mincemeat Pinwheels are really quick, very easy but still everything you want from a mince pie. 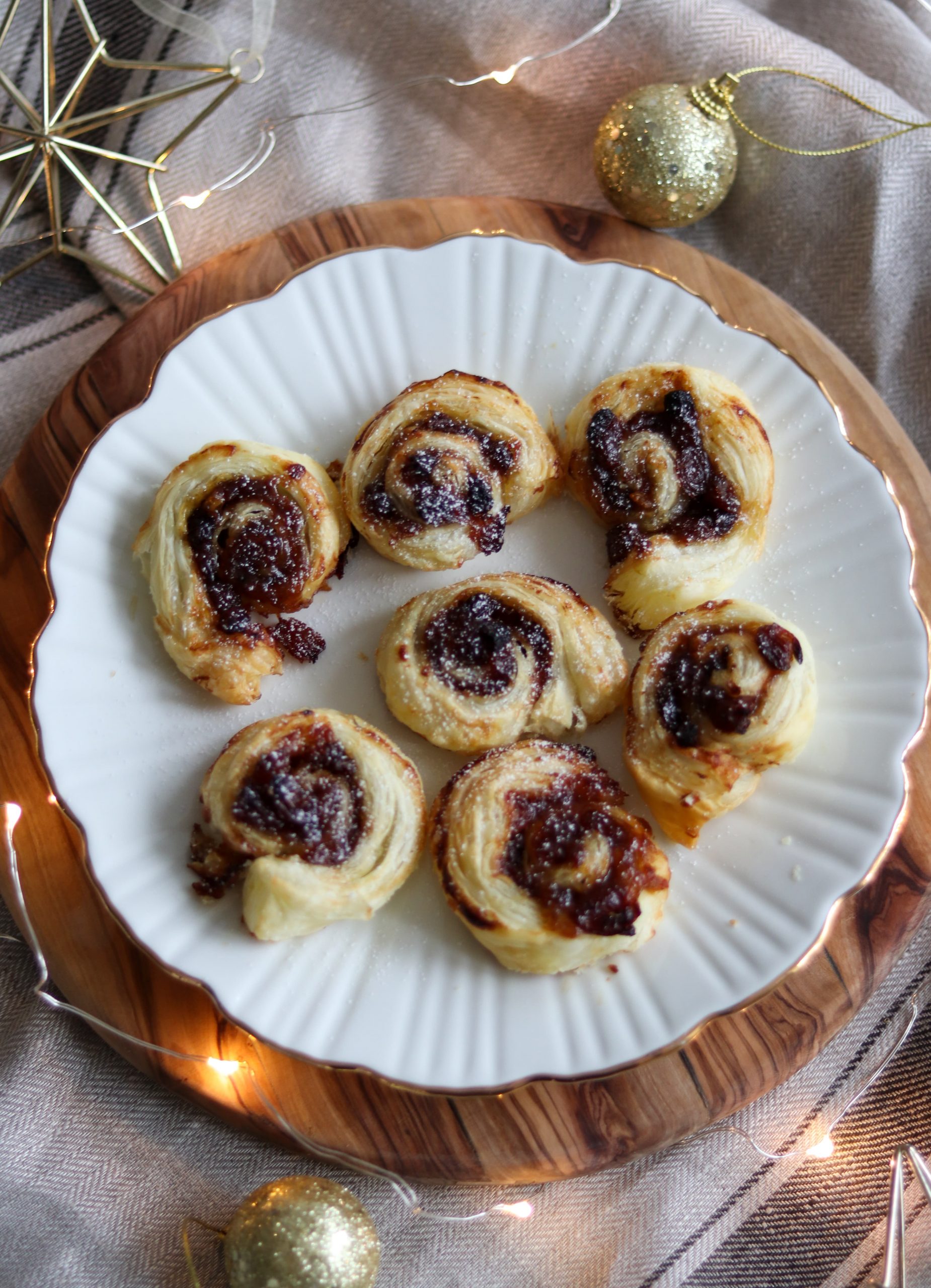 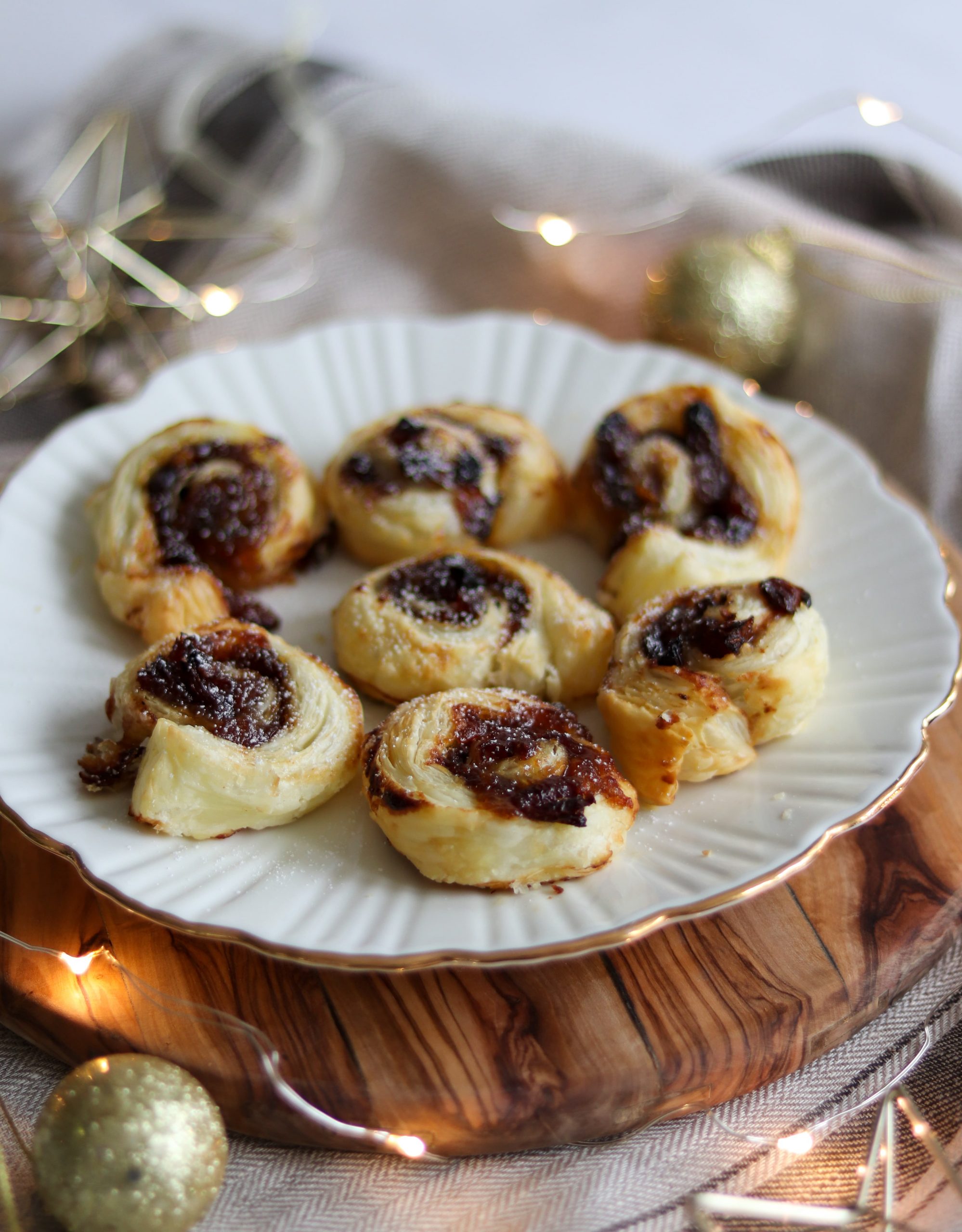 A different take on a mince pie

There is lots of food that is associated with Christmas here in the UK with mince pies being one of them.

For those of you that aren’t familiar with mince pies, they are shortcrust pastry filled with mincemeat which is a sweet mixture of raisins and other dried fruit with suet. It might sound a little strange but it is very tasty.

I love a mince pie, but making them can be a bit fiddly, even using shop bought pastry. Maybe it’s just me being lazy, but you have to cut out rounds of pastry and put them in the tin, fill them with mincemeat and then cut out the lids from pastry.

Unless you’re making my Crumble Topped Mince Pies which are easier and quicker to make.

Due to my laziness, I am always looking for new ways to still get my festive mincemeat fix, but in a more simple way. Last year I made Frangipane Mince Pie Slices, and this year I came up with these Mincemeat Pinwheels. 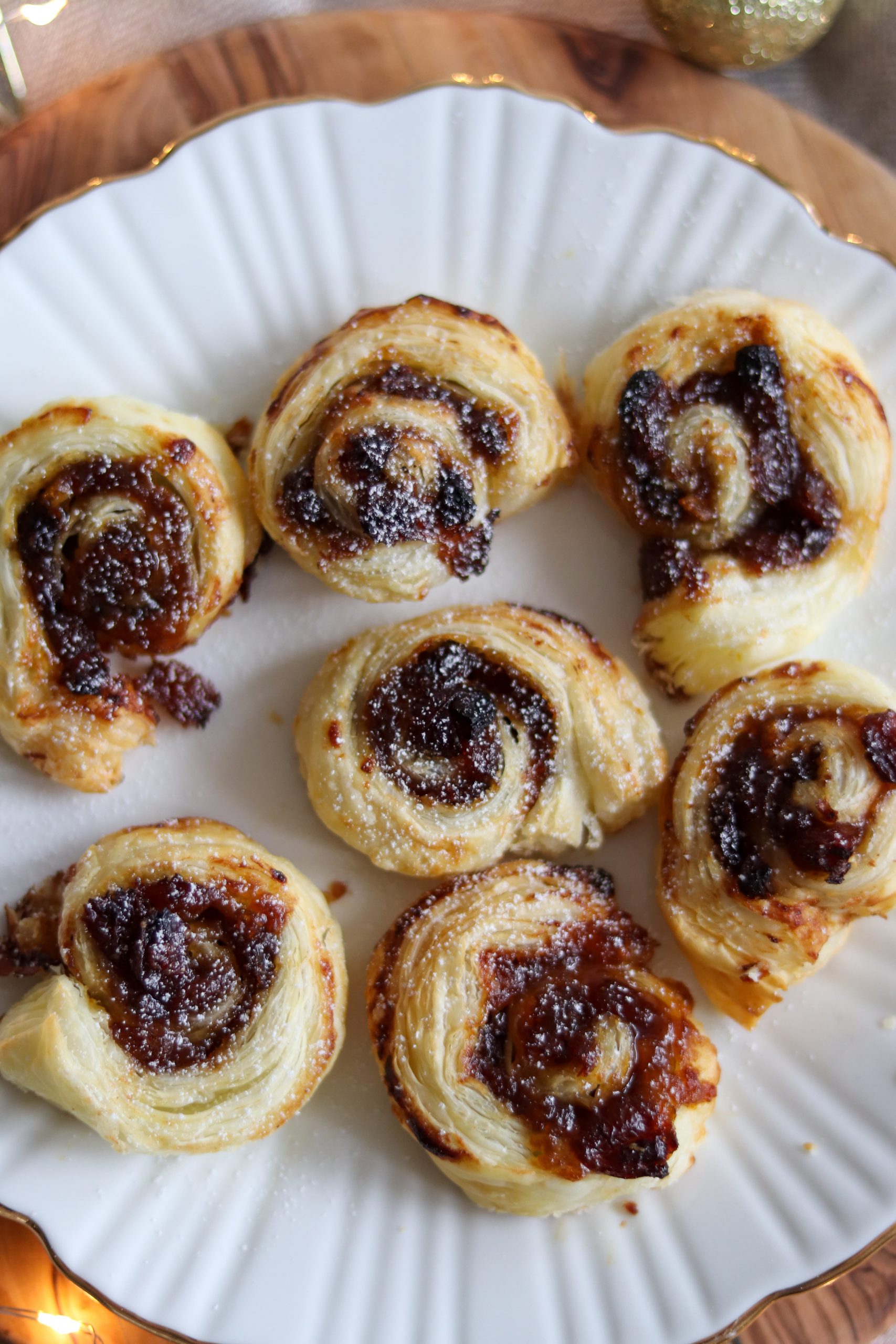 Is it cheating to use shop bought pastry?

Absolutely not! I have lost count of the number of times I have heard chefs say that they don’t make their own puff pastry.

Shop bought pastry is good quality and far easier than making your own. Who has time at Christmas to be making their own puff pastry anyway?!

I like to go a step further and not only buy my puff pastry, but to buy the ready rolled pastry. I apparently lack the skills needed to be able to roll a block of pastry into a neat triangle.

You can obviously buy the blocks of puff pastry and roll it out yourself if you prefer. 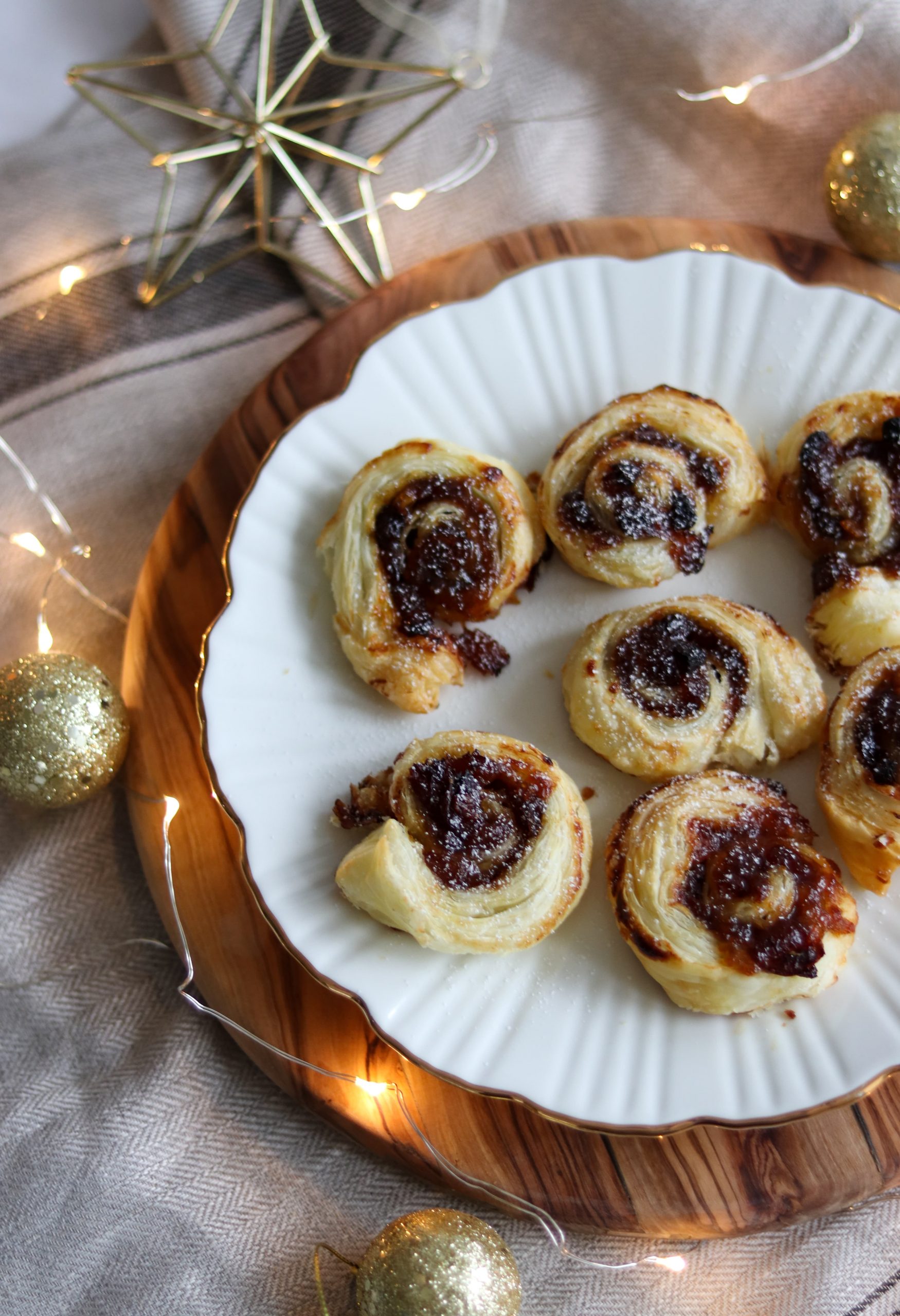 Which mincemeat is recommended to use? 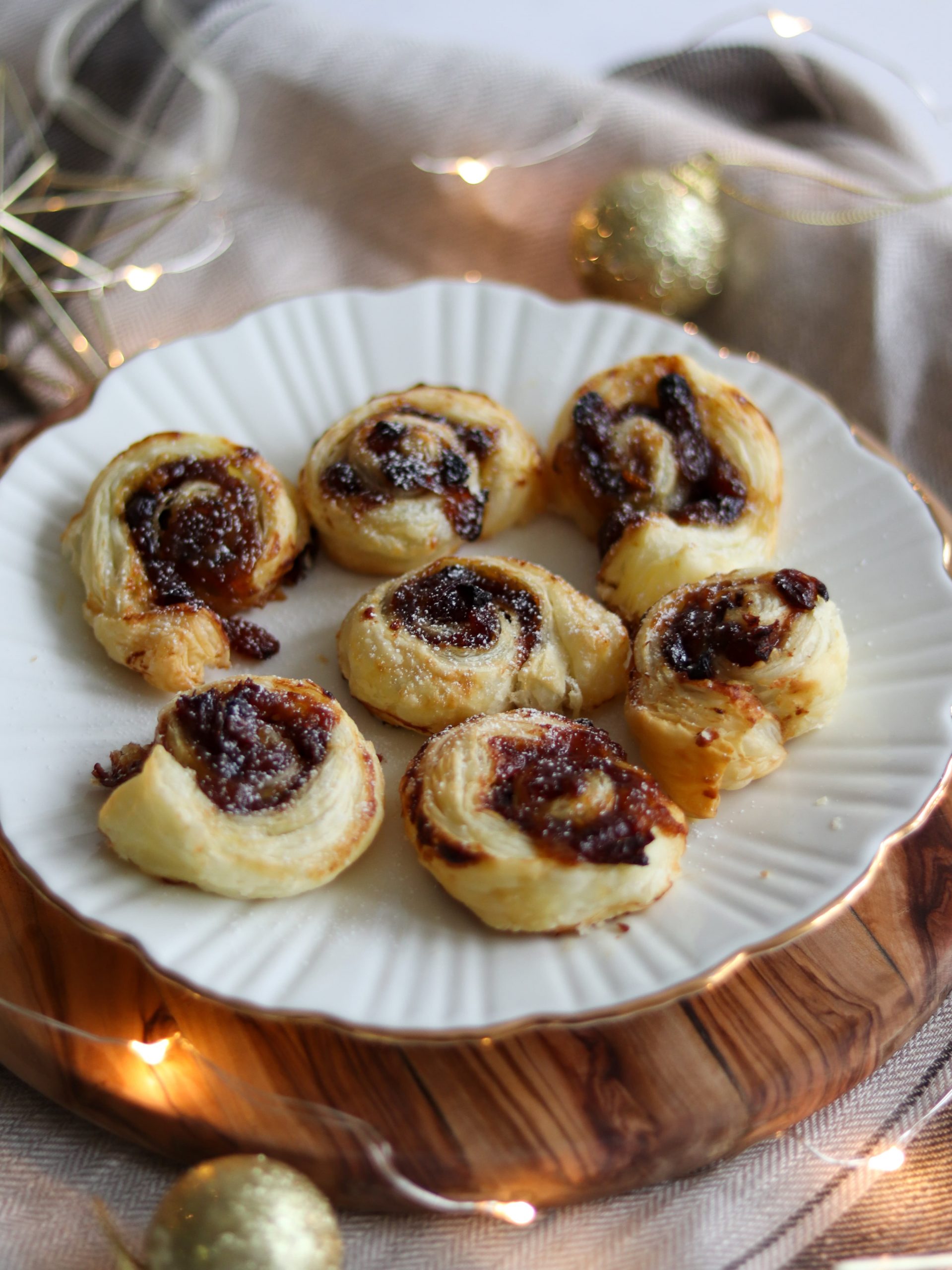 Do you have to chill the pinwheels before cutting?

I do recommend not skipping this step! Just ten minutes in the fridge helps the pastry firm up again. This makes it easier to cut the pastry.

It also means that the pinwheels hold their shape better and don’t get too squashed with they’re cut.

If you don’t have an orange, you can make these pinwheels without the zest. However I think it adds a lovely lift to the mincemeat which makes it extra delicious.

I really would recommend adding some orange zest if you can. 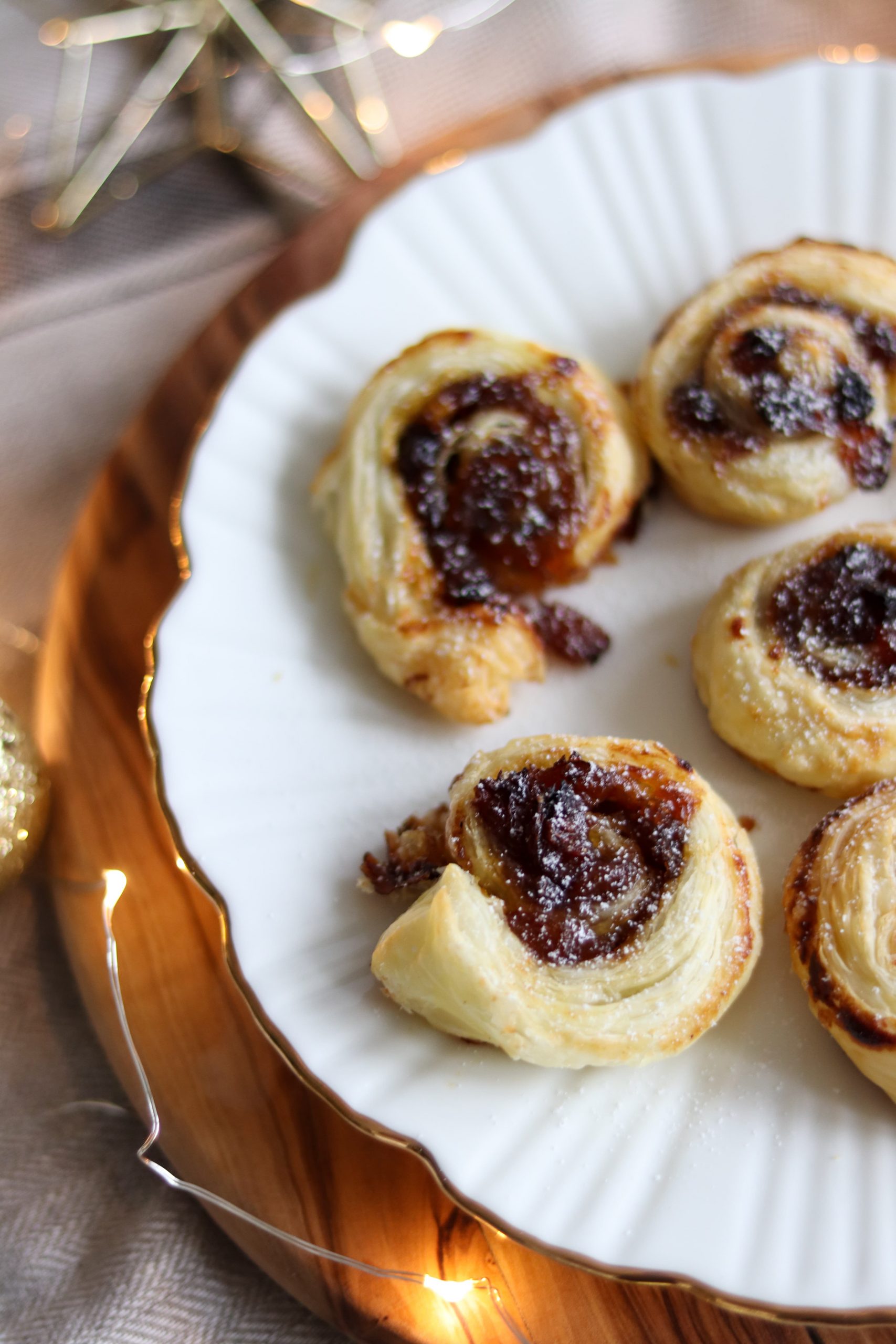 Be careful – mincemeat is sticky!

Mincemeat is so incredibly sticky when it cools which makes is a nightmare to clean off!

You either want to remove the pinwheels from the tray as soon as they come out of the oven or line the baking tray.

If you are not going to line the tray, transfer them to a wire rack to cool as soon as they’re baked. The mincemeat will still be warm and won’t have stuck to the tray yet.

It is more simple if you line the tins with baking parchment. You can then wait for the pinwheels to cool slightly before transferring them to a wire rack to cool completely. 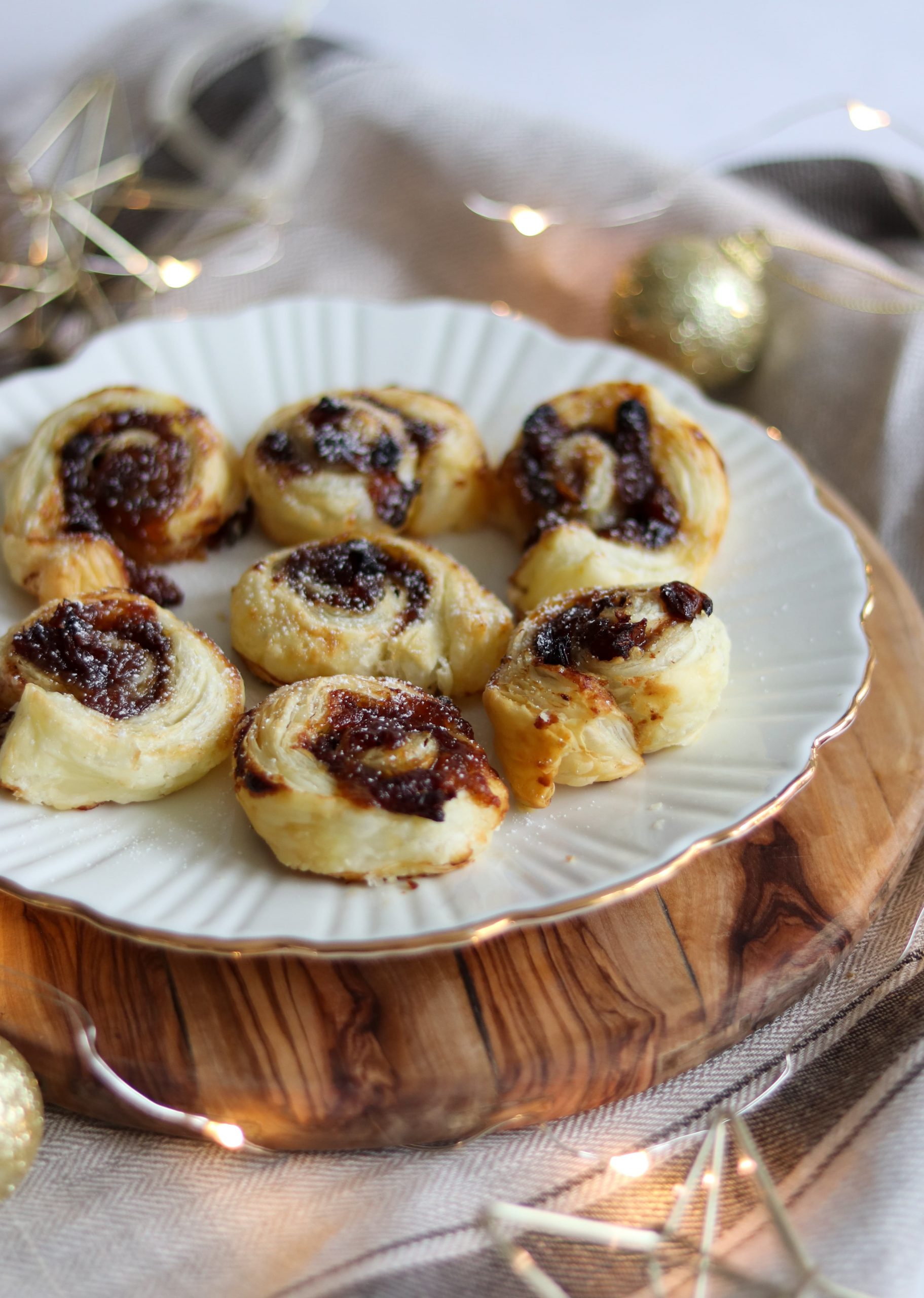 Can these mincemeat pinwheels be frozen?

Cut them and lay them on a baking tray and put them in the freezer. After an hour they should be frozen enough to transfer to a bag or container and frozen until later.

When want to bake them, place the on a baking tray and brush them with milk. Bake them from frozen for 8-10 minutes longer than the recipe states until they’re golden and delicious. 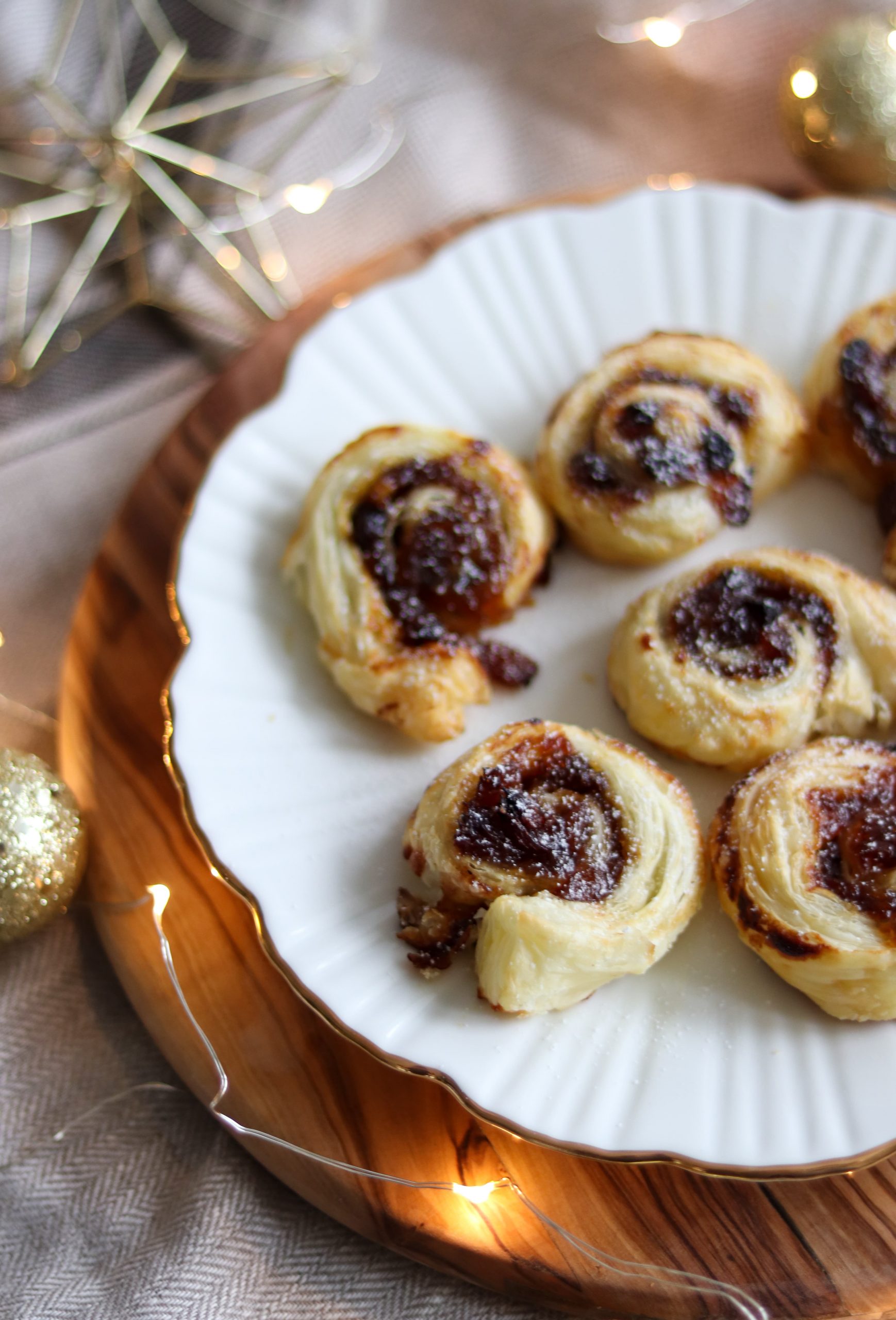 How long will these pinwheels last?

If kept in an airtight container, these Mincemeat Pinwheels will keep for up to five days.

The pastry does start to become slightly less crisp as the days go on as they pastry absorbs the moisture from the mincemeat. They are still delicious though and I don’t mind this. 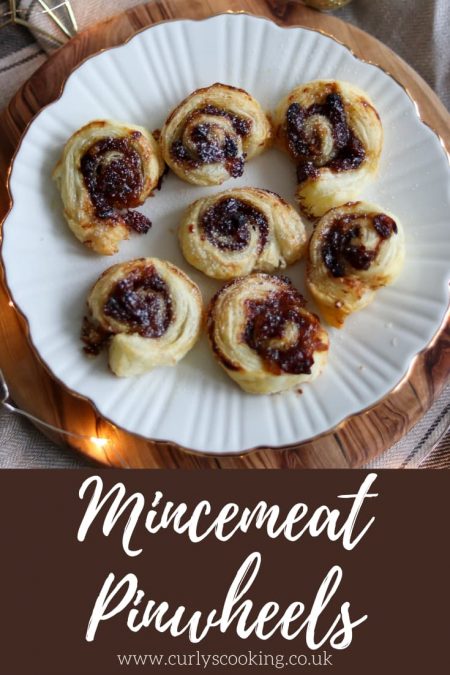 Mince pies but without all of the cutting and assembling. My Mincemeat Pinwheels are really quick, very easy but still everything you want from a mince pie.

Keep in an airtight container for 3 days.