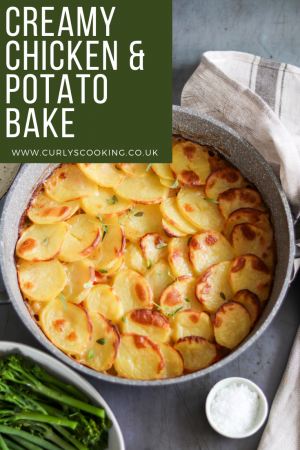 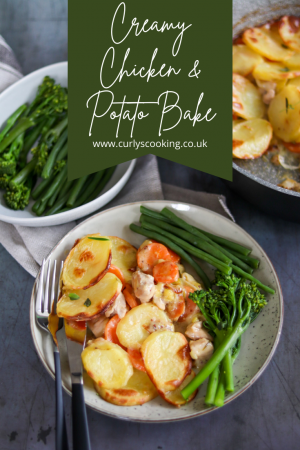 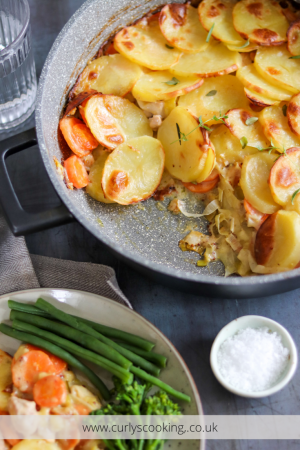 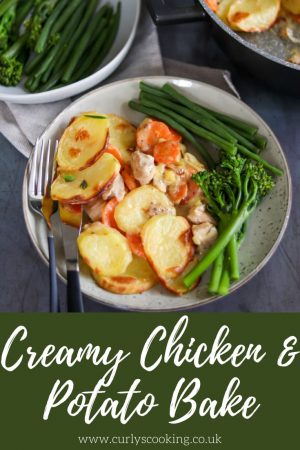 Deliciously creamy chicken and vegetables covered in a layer of crisp potatoes. This Creamy Chicken & Potato Bake is the perfect one pot dinner.

What is a creamy chicken & potato bake?

As the name may suggest, this Creamy Chicken & Potato Bake is chicken and vegetables in a creamy sauce topped with a layer of sliced potatoes.

I did start off referring to this as a pie, but people can be quite fussy and particular when it comes to pies. Some people say for something to be called a pie it has to be completely encased in pastry. So involving no pastry at all might not have been popular!

It is also not dissimilar to a traditional British hotpot. Think of it as a creamy chicken hotpot instead of the usual lamb version.

Although the idea isn’t a new one, my version came about by making it up as I went along with what I had in the fridge. Some of my favourite meals start off like this. I then have to make it again and write down the quantities!

A delicious one pot meal

I love one pot meals. You don’t have to juggle multiple pans and there is less washing up!

When you have a busy lifestyle, the last thing you want is to create lovely meal and then spend as long washing up the whole list of pots, pans and utensils it took to make.

In the recipe I say to start by peeling the potatoes and keeping them in water. If you want to reduce the washing up further, just prepare them when the filling is made and put them straight onto the pie.

which cut of chicken is best to use?

I prefer to use chicken thighs for meals like this where it is going to be cooked for a little longer. Thighs have more moisture which means they are much less likely to dry out when cooking.

You can of course use chicken breasts if you would prefer. These would work really well too. I would just make sure you don’t cut the chicken too small and take it out of the pan as soon as it is lightly brown.

You aren’t looking for the chicken to be fully cooked at the first stage. This is just to lightly sear the meat and it will continue cooking completely in the oven.

Can you use leftover cooked chicken?

Shred the cooked chicken and add it to the pan when you re-add the vegetables to the sauce.

which potatoes are best to use

Waxy potatoes are much better at holding their shape when cooked which is what you want for this recipe. You don’t want the potatoes to start breaking apart as they cook.

I prefer to use red potatoes as they keep their shape and are very widely available. If you’re in the US, Yukon Gold potatoes would be a good option.

You could use a waxy new potato if you prefer but I would make sure they are a large variety because you don’t want to be constructing a mosaic with tiny potato tiles.

how to prepare the potatoes for ths chicken & Potato Bake

It is completely optional whether you want to peel the potatoes or not. Although I say to peel them in the recipe, I have made this with both peeled and unpeeled potatoes.

I think peeled potatoes give the finished dish a slightly better look; but I more often than not don’t peel them.

I slice the potatoes with a knife as it doesn’t take very long and you can get them the thickness you want easily.

If you have a mandolin and the thickness can be adjusted, by all means use it. I wouldn’t recommend using a food processor with an attachment because this cuts the potatoes too finely and they sink into the filling.

Can you use different vegetables?

As you can see, I haven’t included onions in the recipe. This is because I am not the biggest fan of onions! I am in good company though as Jamie Oliver’s wife, Jules, doesn’t like them either.

The leeks add enough flavour for me, but you can definitely add a diced white onion if you like. Add this at the same time as you add the leeks and carrots.

You can also add additional vegetables. Mushrooms and peas would work well.

I like to add fresh thyme and rosemary to my filling because they go really well with chicken; but you could use any herbs you like. Parsley or tarragon would be good alternatives.

If you don’t have fresh herbs, you can use dried. I would just half the quantity as they can be stronger in flavour.

I have used sour cream because this was originally what I had that needed using up in my fridge. This is a staple in my fridge because we have a lot of Mexican inspired meals.

If you don’t have sour cream there are a number of dairy products you can use instead. Creme fraiche, double cream or even milk would all work.

Whatever you use, you want to let it bubble until the sauce is quick thick. If the filling is too saucy, it bubbles up around the sides of the potatoes. This obviously isn’t the end of the world, but it looks prettier without this.

Don’t panic if you don’t have an oven proof pan; you can still make this!

Make the filling in a normal pan and then transfer it to an oven proof dish before laying on the sliced potatoes.

I would use quite a large dish. The pan I use is 28cm in diameter so something a similar size would work well.

what to serve with this creamy chicken & potato bake

The pie is nearly a complete meal in itself. Personally, I don’t think you need to serve any additional potatoes with this.

I do like to serve some extra vegetables alongside though because there is always room for tenderstem broccoli! You could make my Roasted Parmesan Tenderstem Broccoli or just serve steamed vegetables.

If you have any leftovers, keep it in an airtight container in the fridge for up to two days. I would recommend reheating thoroughly in the oven.

How to make it vegetarian, vegan or gluten free

To make this Creamy Chicken & Potato Bake vegetarian or vegan you would first need to swap the chicken. There are lots of meat replacement products that have a similar look and texture to chicken that would work well as an alternative.

These would not need browning in the pan so you can just add them to the sauce with the vegetables.

To make it vegan and dairy free you would need to swap the sour cream to a plant based alternative. There are quite a few options available now but you could just use dairy free milk if this is what you have.

To make it gluten free, you would just need to use gluten free plain flour to make the roux.

Deliciously creamy chicken and vegetables covered in a layer of crisp potatoes. This Creamy Chicken & Potato Bake is the perfect one pot dinner.

If you do not have an oven proof pan, prepare the filling in a standard pan and transfer to an oven proof dish before adding the potato topping.

Nutritional information is given as a guide and may vary.