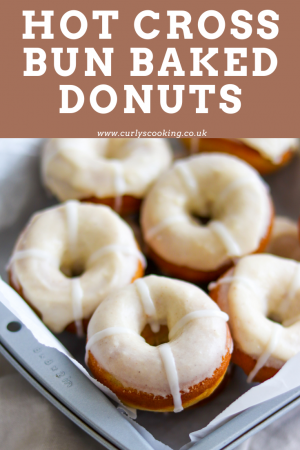 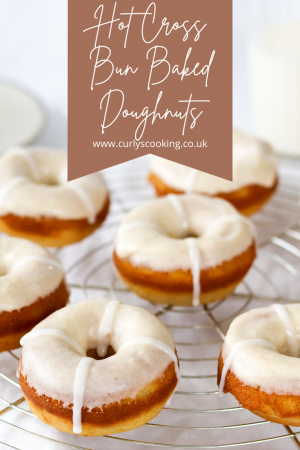 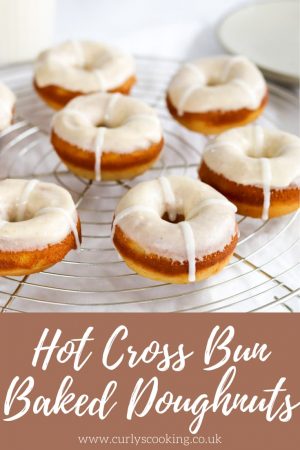 The tasty flavours of a hot cross bun in doughnut form. My Hot Cross Bun Baked Doughnuts are a light and fluffy way to enjoy the flavours we all know and love.

These Hot Cross Bun Baked Doughnuts have the flavours of a traditional hot cross bun but in doughnut form.

Hot cross buns are something so many of us associate with Easter. I love eating them, but they aren’t the quickest bakes to make. I much prefer making my Apple & Sultana Teacakes!

Instead of making hot cross buns, I decided to make a doughnut version.

I decided to leave out the dried fruit typically found in hot cross buns because I wanted to keep these doughnuts light and fluffy. This also keeps people who aren’t fans of raisins and peel happy – my Mum will be pleased!

What are baked doughnuts?

I absolutely love fried donuts, but I have never been brave enough to try them at home because I am not keen on deep frying.

Baked doughnuts are far more simple to make at home because there is no hot fat involved! I like to think this also makes them slightly healthier.

Which tins are needed?

You do need to buy specific doughnut tins to make these baked doughnuts. These tins are quite readily available these days and aren’t too expensive.

Try and buy a doughnut tin that is quite deep. There are some you can buy that are quite shallow so you will get a thinner doughnut.

Make sure you grease the tins well and the doughnuts should pop out very easily. I like to use spray oil for this.

If you really didn’t want to buy the doughnut tins, you could use a muffin tin. Obviously they wouldn’t be doughnut shaped but they would still be tasty.

Again you would need to make sure you thoroughly greased the tin before adding the doughnut batter.

These Hot Cross Bun Baked Doughnuts are easy enough to make…once you get past one hurdle. The only critical step in this recipe, is making sure you don’t put too much batter into each doughnut hole.

Now you may think this sounds simple enough, but take it from someone who knows; you need less batter than you may think!

For example when making cupcakes, you are usually recommended to fill the cases three quarters of the way. With these baked doughnuts, just under half full is plenty.

Don’t get me wrong, if you over fill them it is by no means the end of the world. The only difference will be that instead of having the hole in the middle that a doughnut should have, this will fill in and they will come out of the oven looking more like a muffin.

How to decorate the doughnuts

These doughnuts have two separate icings. The first, cinnamon flavoured icing coats half of the doughnut. I find it is easier to dunk the doughnuts into the icing and twist them so they get coated in the icing.

You are looking to try and coat the top half of the doughnut in the icing, so don’t dunk too far! The icing will be quite thick so you might have to twist a few times to make sure the doughnuts are completely coated.

The second icing is just to make the cross on top of the doughnuts. This is optional and you can leave it off if you prefer.

If you don’t have a piping bag, spoon the icing into a sandwich bag and squeeze to one corner. Cut small hole in the corner and use this to pipe the cross on top of each doughnut.

Do not worry if the icing isn’t perfect. Mine are definitely not perfect but they look quite cute and they are delicious.

How long will these doughnuts keep for?

As with most doughnuts these are best eaten the day you bake them or the next day. They will still be ok for a couple of days longer but not as fluffy.

Although I haven’t tried, I think these doughnuts would freeze well. Let them cool completely and freeze them un-iced.

Freeze for up to one month and let defrost completely at room temperature before icing.

These doughnuts aren’t just for Easter!

Don’t be mistaken, these doughnuts aren’t just for Easter!

Yes, they are called Hot Cross Bun Baked Doughnuts, but they can definitely be made at any time of year. The subtle spices are those associated with hot cross buns but are delicious year round.

If you aren’t making these at Easter, you can definitely leave the cross off. Then they become a tasty mildly spiced baked doughnut.

The tasty flavours of a hot cross bun in doughnut form. My Hot Cross Bun Baked Doughnuts are a light and fluffy way to enjoy the flavours we all know and love.

These are best eaten on the day you bake them.