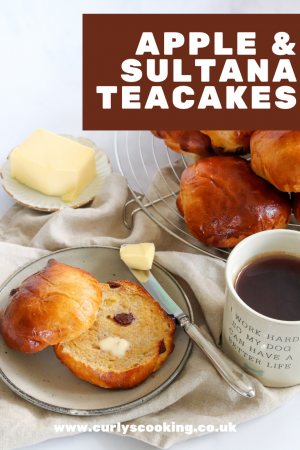 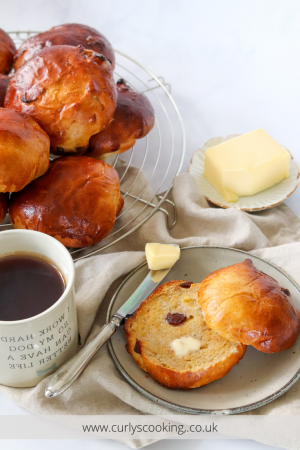 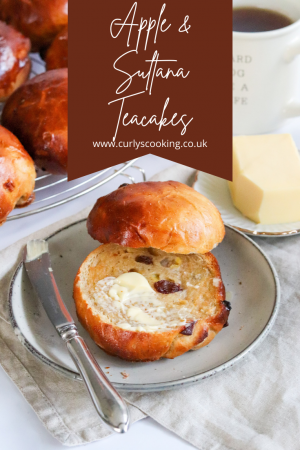 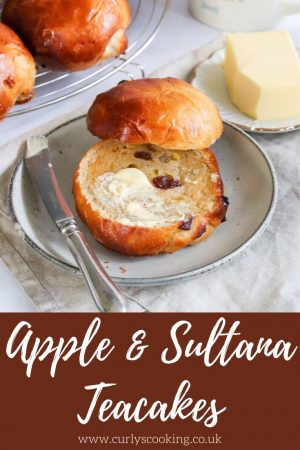 Subtly spiced buns studded with apples and sultanas. These Apple & Sultana Teacakes are irresistible toasted and slathered with butter!

Here in the UK, a teacake is a sweet, yeasted bun containing dried fruits. They are typically served toasted and spread with butter.

They have a dark brown, slightly rounded surface which is lighter underneath. Common fruits to include are raisins, sultanas, currants and mixed peel.

Teacakes got their name because they were usually served with Afternoon Tea.

What is the difference between teacakes and hot cross buns?

Personally, I don’t think there is much of a difference between teacakes and hot cross buns.

There are the obvious visual differences as teacakes don’t have the iconic cross on them that hot cross buns do. Teacakes also don’t have the sticky apricot glaze spread across them when they are baked.

Aside from that the differences are more subtle. Hot cross buns are sometimes considered to be more heavily spiced than teacakes. Both traditionally use a combination of raisins or currants and mixed peel.

The hot cross bun dough is more enriched than teacake dough as it includes an egg as well as milk.

Teacakes are usually slightly larger and flatter then hot cross buns which are more of a traditional, round bun shape.

I have made both and would personally much prefer to make teacakes over hot cross buns. They are just as delicious but without the added effort to pipe the cross and glaze them.

You might also want to try my Apple & Sultana Fruit Bread, it’s delicious!

sultanas, apples and cinnamon are the perfect combination

I don’t know about you, but these flavours are some of my favourites. They are so warming and comforting and go together so well.

I wanted to add apples to my teacakes because they would really compliment the other flavours. Everyone knows apples and cinnamon are amazing together!

why use dried apple?

Instead I chose to use dried apple which works really well. Making your own Oven Dried Apple Slices couldn’t be easier. It keeps for a few months so you can make a few batches of these teacakes.

If you don’t want to make your own dried apple, you can always buy it. You can buy dried apple in most large supermarkets. It isn’t usually available in smaller stores so you might have to search for it a little.

how to make dried apple at home

Drying your own apples is really simple! It takes a little bit of time but is really easy to do.

Peel and core the apples and cut them into thin slices. The thinner you cut the apple, the quicker they will dry. Mine were roughly 3mm thick.

Add the apple slices to a bowl and coat with lemon juice to stop them browning.

Line the apple slices on a wire rack and bake in the oven at around 70ºC (fan assisted, 90ºC non fan) for 3-4 hours. You are looking for the apples to feel dry but not crisp.

Store them in an airtight container until you are ready to use them.

what is enriched dough?

Enriched dough is simply dough that has had fats, sugar and dairy added. These give the finished bread a soft and buttery texture with a soft crust. It is my favourite bread dough!

Enriched doughs do tend to take longer to prove which is why they typically have more yeast than lean doughs (doughs made with water and without dairy).

The enriched dough works really well for these Apple & Sultana Teacakes. They are so light, fluffy and soft – so good!

Why do you need to heat the milk?

I heat the milk so it is just warm whenever I am making enriched dough. It helps activate the yeast and it is always better to not use fridge cold ingredients.

You don’t want the milk to be hot, just a little warm. I heat it in the microwave for 50 seconds or so just to take the chill off.

Which kind of yeast can be used?

There are three types of yeast. All could be used for these Apple & Sultana Teacakes, but you will need to know how best to use them.

Although I don’t pay a huge amount of attention to best before dates, you need to with yeast. Yeast is ‘alive’ and if it has died, it won’t help your bread to rise no matter how long you wait!

If you are ever not sure if your yeast is alive, just add it to some water and leave for 5-10 minutes. After a few minutes if you have bubbles you are good to go; if it doesn’t you need to buy more yeast.

Giving a specific proving time is tricky because there are many variables! If your kitchen is warm, your dough can prove more quickly and if it is cold it can be much slower.

For the first prove, you are looking for your teacake dough to double in size. For the warmer months of the year, I cover my dough and leave it to prove on a sunny window sill.

However when it is cold, it needs a bit of help! Turn the light of your oven on only and leave the covered dough in there with the door closed. The light will create a slight warmth which will help speed up the proving process.

I like to make sure the teacakes are as close in size as possible. After the second prove, I weigh the dough and divide that by 10 so I know how much each teacake should weigh.

After I have shaped the dough into balls, I try to make sure there are no sultanas poking out the top of the dough. These have a tendency to burn if they are left exposed out of the dough. And burnt sultanas are bitter – not nice!

I chose to double egg wash my teacakes because I wanted a good coverage and a nice deep brown colour. If you prefer a lighter glaze, you can brush them once.

Toast your teacake to enjoy it at it’s best!

I really think you need to toast your teacake to really appreciate the deliciousness. I know if might sound a little strange to toast freshly baked bread, but trust me; it’s worth it.

I cut my teacake in half and put it in the grill cut side up. I actually only toast the cut side so that the outside is still nice and soft.

You can of course toast your teacake on both sides, it is up to you! But it is compulsory to then slather it with butter; that isn’t up for negotiation!

How long will these Apple & Sultana teacakes keep for?

As it is recommended to toast these teacakes, they can keep a little longer than some other types of bread. Keep them in an airtight container for 3-4 days.

If you want to keep them longer, I would recommend freezing them.

How to freeze the teacakes

When the teacakes are completely cooled they are ready to be frozen. I recommend wrapping them individually in cling film so they don’t stick together when they are frozen.

You can then put the wrapped teacakes in a bag or container and freeze them. They can be frozen for up to three months.

When you want to eat a teacake, take it out of the oven and let it defrost for a few hours before toasting.

I would recommend freezing the teacakes on the day they were baked if possibly so they are at their freshest when defrosted.

Subtly spiced buns studded with apples and sultanas. These Apple & Sultana Teacakes are irresistible toasted and slathered with butter!

Keep the teacakes in an airtight container for 3-4 days.