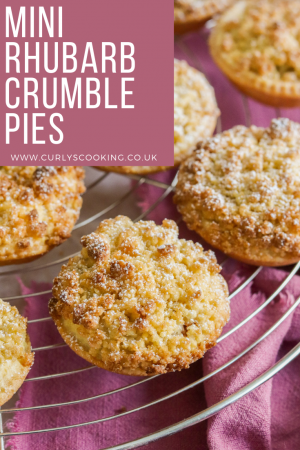 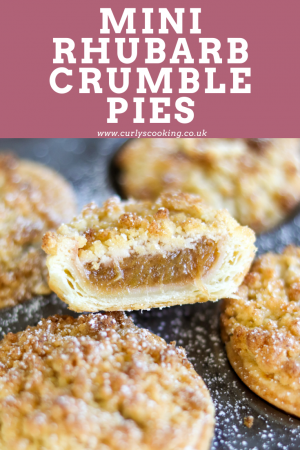 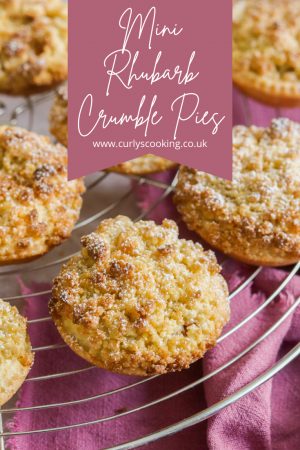 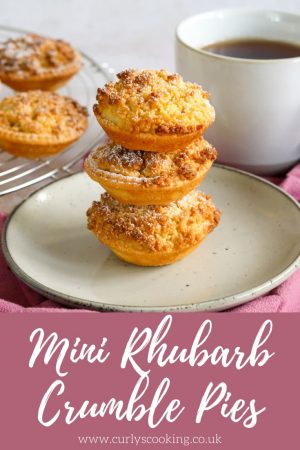 A British classic, turned into a mini pie, what’s not to love?! These Mini Rhubarb Crumble Pies are simple to make and so tasty. Great as a snack but also easily made into a dessert.

what are mini rhubarb crumble pies?

These lovely little pies are a twist on a popular British classic. They have a shortcrust pastry base, filled with a delicious rhubarb filling and then finished with a crumble topping.

I came up with the idea of these little pies when I was making my Crumble Topped Mince Pies (recipe coming soon). Of course rhubarb would work brilliantly with a crumble topping!

They are really simple to make and are a great afternoon treat. They are also easily served as a dessert with some custard, cream or ice cream.

when is rhubarb in season?

I am a huge fan of ready rolled pastry. Some people may say this is even more lazy but I passionately disagree. I am not blessed with the skills of being able to roll out pastry into a perfect rectangle.

This is why ready rolled pastry is such a godsend for me! It makes recipes quicker and easier; which is great because you don’t always want to spend hours in the kitchen baking.

You can of course make your own shortcrust pastry. When rolling the pastry out, you are looking for it to be approximately 4mm thick.

which tins do you need for these mini rhubarb crumble pies?

For these pies, you do need a shallow bun tin. I grew up referring to them as mince pie tins, but apparently they are commonly known as shallow bun tins.

These are basically, a shallow version of tins you would use for making cupcakes or muffins. The shallow tins provide a good ration of pastry to filling to crumble topping.

If you were to use standard cupcake tins, you would need much larger circles of pastry and a lot more of the rhubarb filling. I would imagine this would affect the baking time and this isn’t something I have tested.

You also need a circular cutter to make these Mini Rhubarb Crumble Pies. The size I use is 3 inches or 7.5cm which is the perfect size for the shallow bun tin.

I use a fluted cutter but you can just as easily use a straight cutter. Usually the benefit of using the fluted cutter is to make the edges more decorative. But for these pies you are covering them with crumble so you can’t really see the edges anyway.

These pies are easily made gluten free. Gluten free shortcrust pastry doesn’t seem to be as readily available as puff pastry, but most large supermarkets should stock it.

Gluten free shortcrust pastry is more commonly found in the freezer section. It may be a block of pastry which you will need to defrost and then roll out yourself.

If you are rolling the pastry yourself you are looking for it to be approximately 4mm thick.

The crumble topping is easily make gluten free, just swap the self raising flour for gluten free flour. I have used gluten free plain flour for this and it works just as well, so use whichever you have in your cupboard.

These little pies are perfect for adding additional flavours to.

You could also add in a couple of tablespoons of flaked almonds to the crumble topping to add texture and tasty flavour.

Ginger works really well with rhubarb so this would be a great addition to the rhubarb filling. I would add ½ tsp of ground ginger to the rhubarb along with the sugar. You can taste it and add more if you wish.

Another flavour that I love with rhubarb is port. I add port to my Oaty Rhubarb & Port Crumble and the flavour is so delicious. I would add 2 tbsp and possibly cook the rhubarb for a little longer so the moisture can evaporate.

how many pies does this recipe make?

This does depend on how thick you roll your pastry and also which size of pastry you buy.

Supermarket own brand shortcrust pastry differs in weight compared to the British big brand. The supermarket versions tend to be 375g whereas Jus-Roll is 320g.

Depending on the thickness you roll the pastry, you should make between 23 and 24 pies with a 375g pack of pastry. Obviously if you buy the smaller pack of pastry you will make fewer pies.

how long will these rhubarb crumble pies keep for?

These pies will keep in an airtight container for up to 5 days. You can reheat them in the microwave for 20-30 seconds if you like.

If you would like the pies to keep for longer I recommend freezing them.

how to freeze these pies

These Rhubarb Crumble Pies freeze really well. Once they are baked and completely cool, put them in a freezer safe bag or container and freeze for up to three months.

When you want to eat them, take out however many you want and let them defrost at room temperature.

This is great if you have a glut of rhubarb and you want to make these pies to enjoy later in the year.

A British classic, turned into a mini pie, what's not to love?! These Mini Rhubarb Crumble Pies are simple to make and so tasty. Great as a snack but also easily made into a dessert.

Keep the pies in an airtight container for up to 4 days.