For those times when you don’t want to bake a full batch of twelve cupcakes, these Small Batch Vanilla Cupcakes are perfect. 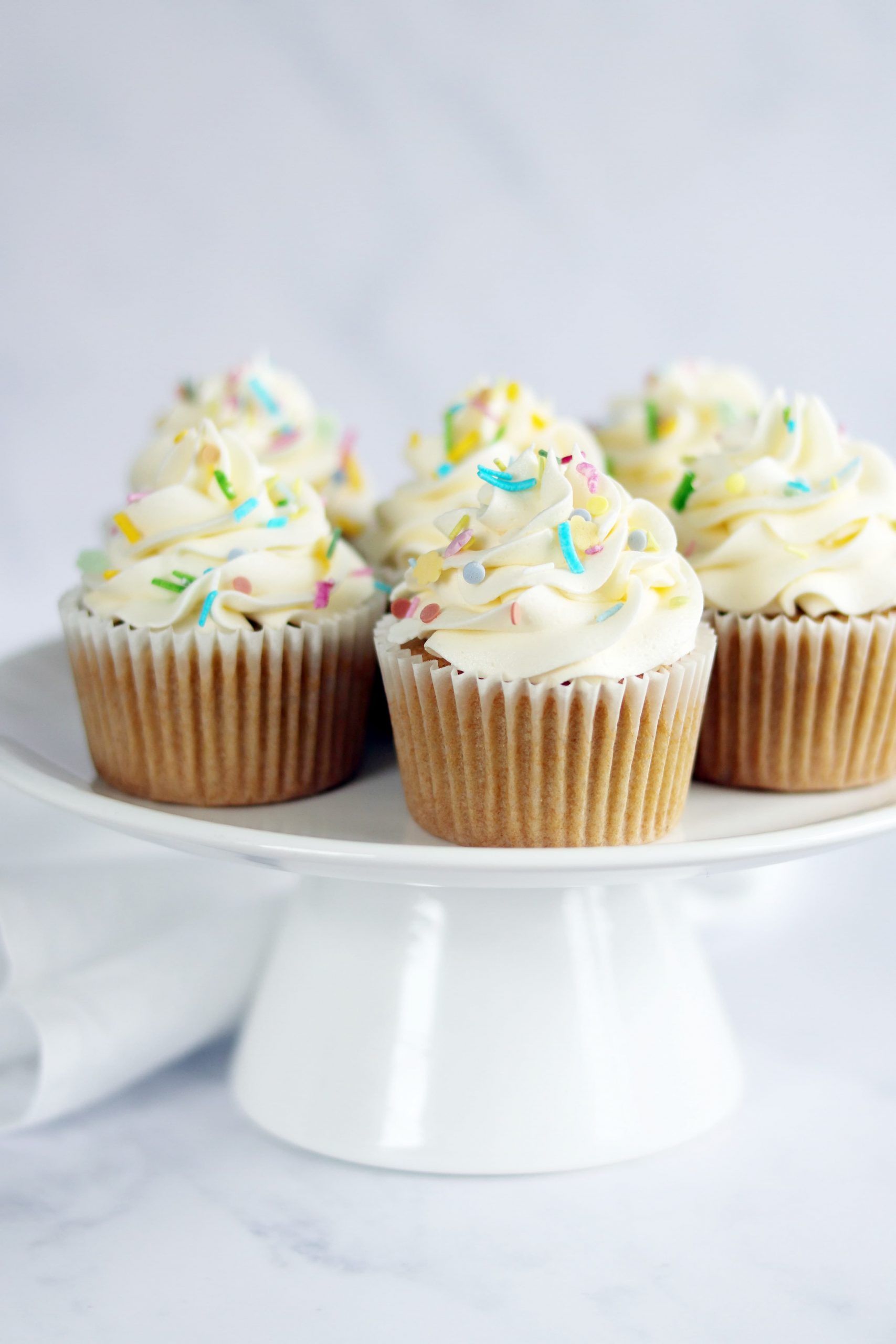 Why do you need a Small Batch Vanilla Cupcake recipe?

Now I know a lot of you may be thinking, why do you need a recipe for less cupcakes? That is a good question because you may think you can never have too many cupcakes.

Believe it or not, there are times when you don’t need twelve cupcakes. The reason I came up with this recipe was way back when I got engaged.

I wanted to ask my friends and sister if they would be my Bridesmaids and the only way I wanted to do this was with cupcakes. In instances like this, you don’t need twelve cupcakes!

Also if you only want to make cupcakes for yourself and a friend/partner etc, you may not want to make a full batch. This is because by the time you have got round to eating them all they might have got a little past their best. 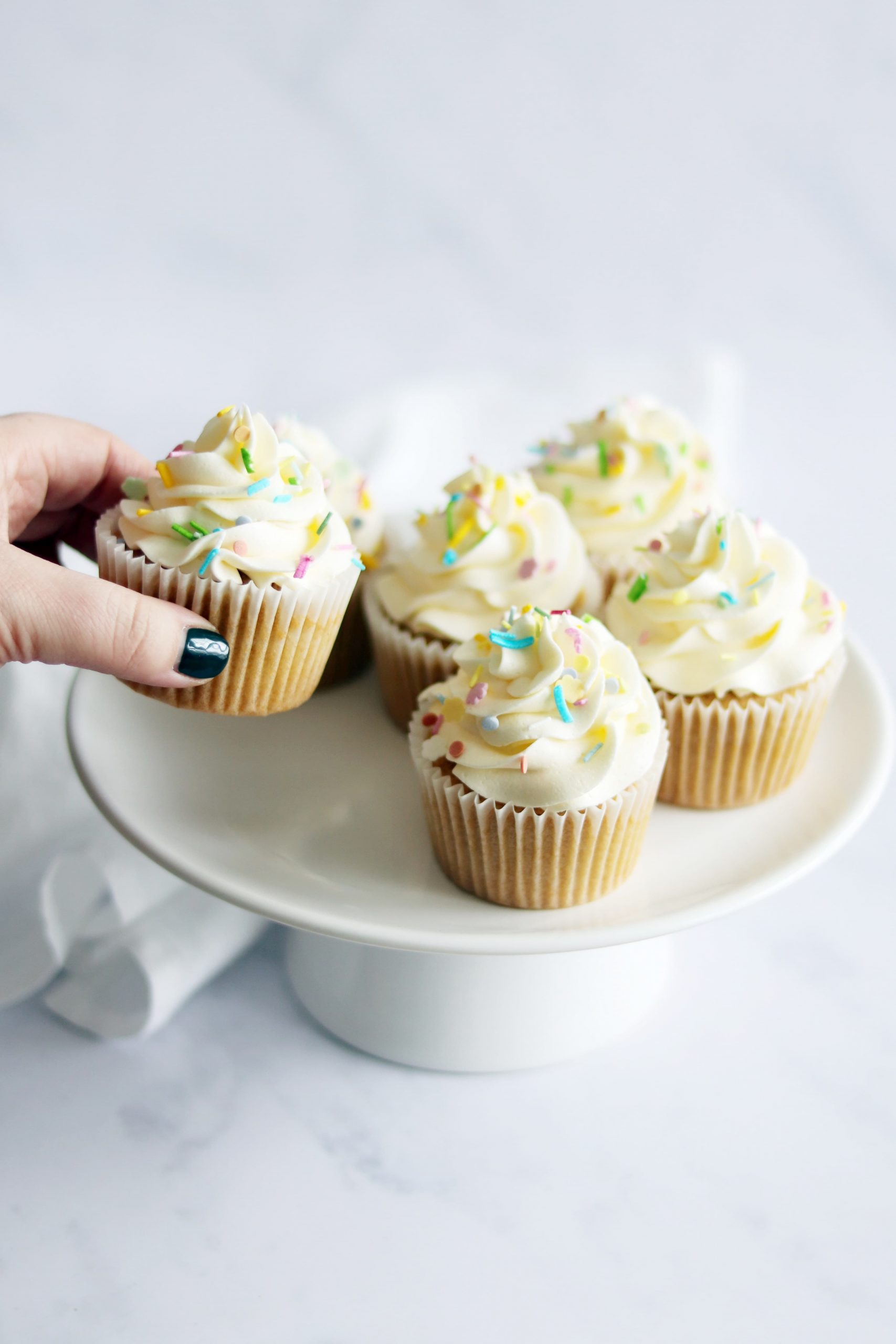 WHICH VANILLA SHOULD I USE?

For the cupcakes, you can use vanilla bean paste or vanilla extract. Whichever you decide to use I would recommend buying a really good quality.

Pure vanilla extract will provide you with a stronger, deeper vanilla flavour which makes these cupcakes even more delicious. 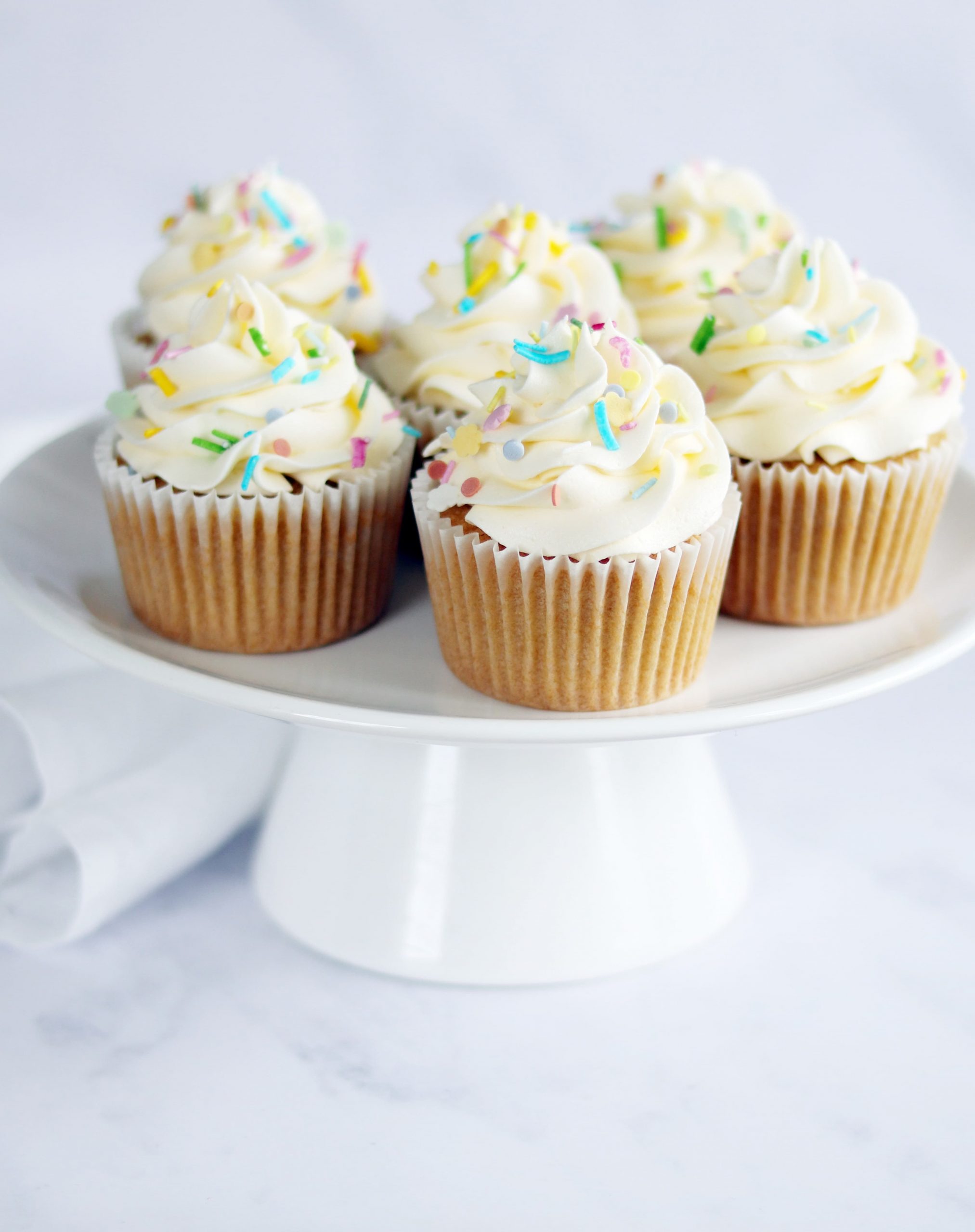 Vanilla bean paste is my favourite to use because of it’s delicious flavour, but also because of the small flecks of black it adds to the cake. It is a bit more expensive than vanilla extract however so use which you prefer.

I would try to avoid vanilla essence as this has a lot more artificial ingredients in it. It used to be commonly sold in supermarkets but I have seen this replaced with extract in recent years.

My recipe doesn’t include vanilla in the buttercream because I don’t like that vanilla extract could discolour the buttercream slightly. If you do want to add vanilla, I would add ¼ teaspoon of vanilla bean paste. 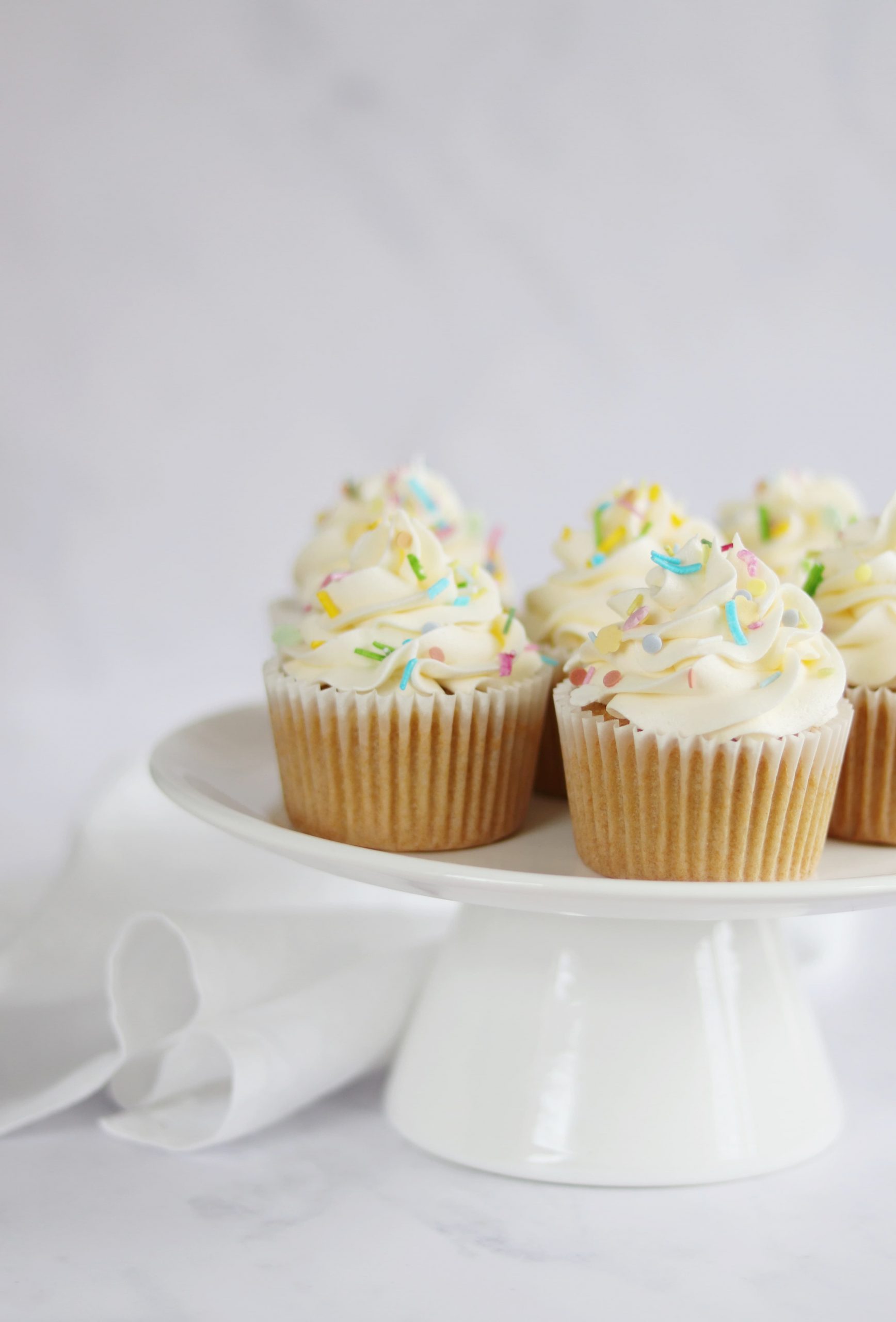 How many cupcakes are in a small batch?

I always use muffin cases for my cupcakes and this recipe will make six large cupcakes. If you use smaller cupcake cases then you may make another one or two.

If you do use smaller cupcake cases they are likely to bake quicker too. Check on them after 10 -12 minutes to see how they are doing. 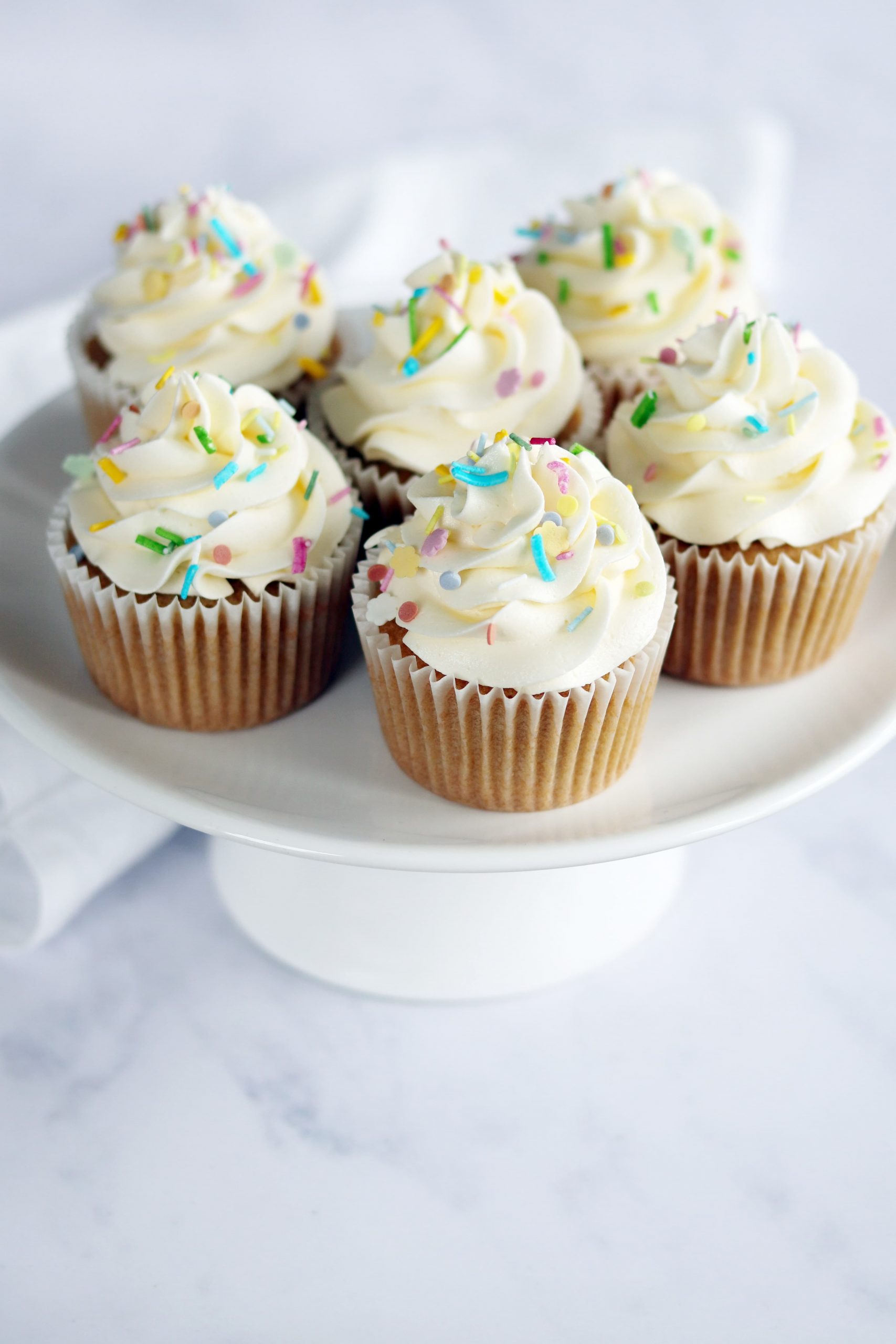 To get equal sized cupcakes, I always use an ice cream scoop with a trigger. As well as ensuring evenly sized cupcakes, it also makes it incredibly easy to divide the batter up.

Make sure you don’t put too much batter into each cupcake case, you want to fill them roughly two thirds of the way.

When you are making the buttercream, you need softened butter. I always add my butter to the mixer first and beat it for five minutes or so until it is completely smooth.

If your butter isn’t completely smooth then you may end up with little lumps of butter in the buttercream. Although this isn’t ideal, it isn’t the end of the world. 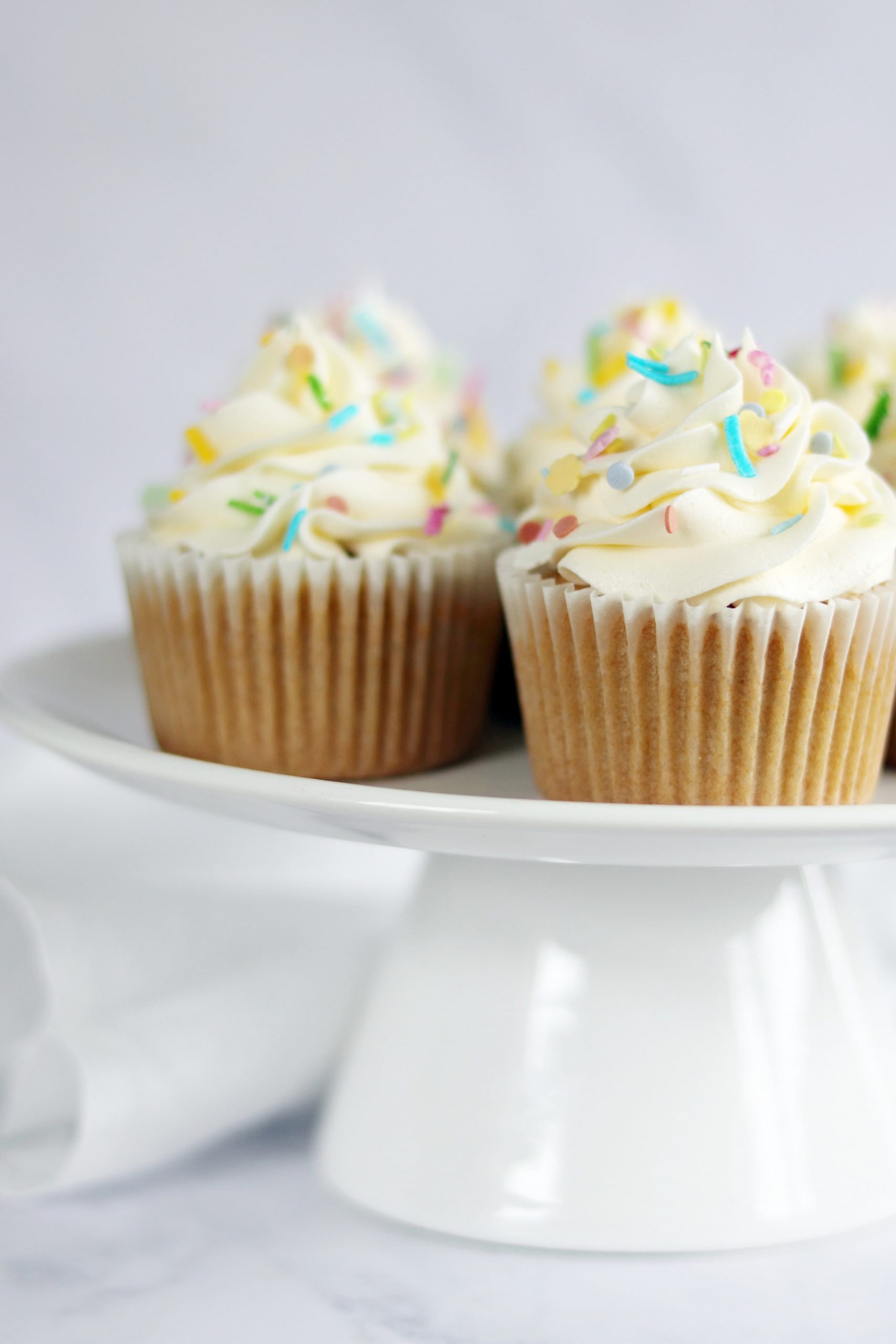 How is best to decorate these cupcakes?

You can decorate these cupcakes however you would like. I like to use a open star tipped nozzle to pipe the cupcakes like you can see in the photos.

If you don’t have a piping bag you can spoon the buttercream into a sandwich bag. Squeeze it to one of the corners and cut this off. You can then use this as a make shift piping bag.

But if piping isn’t your strength you can just spread the buttercream on top of the cupcakes.

You can also decorate the cupcakes with whatever sprinkles or decorations you like. Depending on who you are making them for will obviously depend how you decorate them.

If you are a big fan of sprinkles, check out my Funfetti Cake. 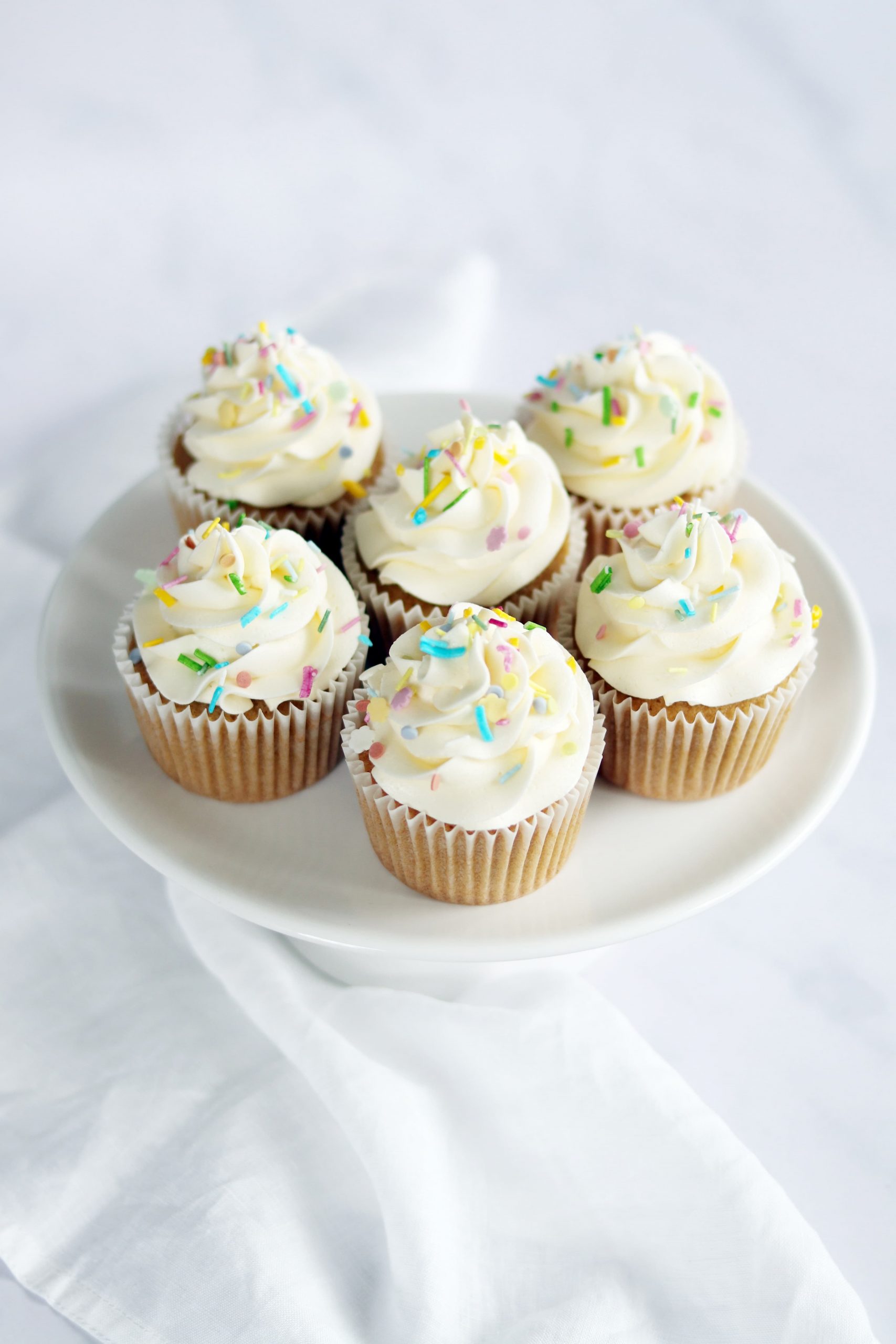 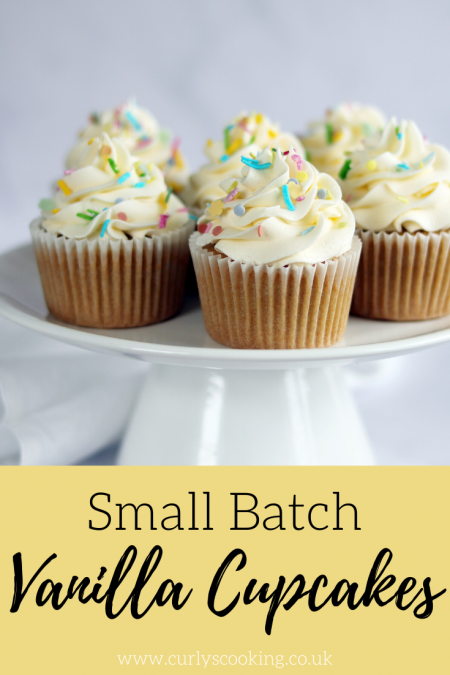 For those times when you don't want to bake a full batch of twelve cupcakes, these Small Batch Vanilla Cupcakes are perfect.

Keep in an airtight container for 3-4 days.