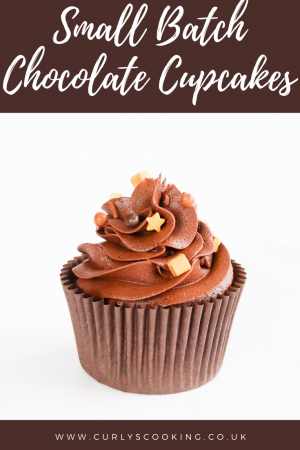 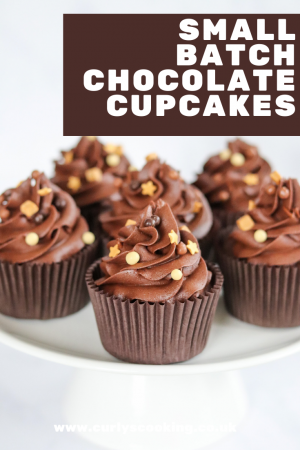 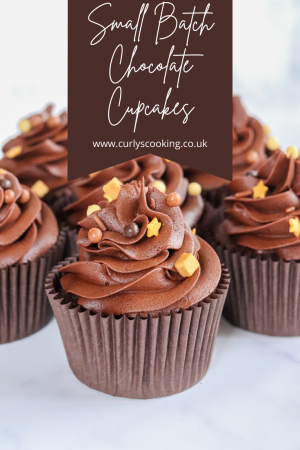 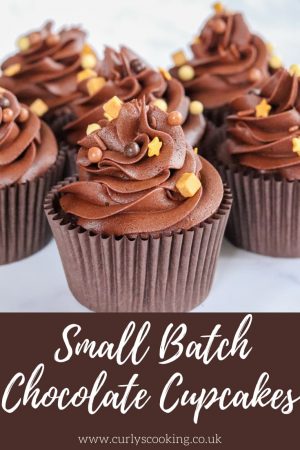 When you want that chocolate fix but you don’t want to bake a full batch, these Small Batch Chocolate Cupcakes are perfect. Share them or keep them all for yourself!

Why do you need a small batch chocolate cupcakes recipe?

But why would anyone want less cupcakes you might ask?! I think everyone should have a few go-to small batch recipes.

There are times in life when twelve cupcakes is just too many. There are only Mr Curly and I at home so if the cupcake craving hits, six is a much more manageable number for us!

If there are only a few of you at home, you might not eat a full batch of twelve cupcakes before they start getting a little past their best. That is where these Small Batch Chocolate Cupcakes come in!

How many cupcakes are in a small batch?

My Chocolate Cupcake recipe hasn’t been published yet – but is on the way! However it is not simply just a case of halving recipes for twelve cupcakes to make six.

As with my Vanilla Cupcake recipe, my recipes for twelve cupcakes uses 3 eggs. Halving eggs isn’t the easiest thing to do and can get a little complicated.

If you do use smaller cupcake cases they are likely to bake quicker too. Check on them after 10 -12 minutes to see if they are baked.

Which cocoa powder is best to use?

Depending on where you live, there are different types of cocoa powder available. The distinction is more obvious in the US where they have Dutch processed and natural cocoa powder.

When making Dutch processed cocoa powder, the cocoa beans are washed in an alkaline solution which reduces the acidity. This means that it doesn’t react when mixed with bicarbonate of soda (baking soda).

For these Small Batch Chocolate Cupcakes I would use Dutch processed cocoa powder. Read more about Dutch processed vs Natural Cocoa Powder over at Sally’s Baking Addiction.

Just make sure you don’t buy drinking chocolate and use cocoa powder from the baking aisle.

Coffee acts as a flavour enhancer to chocolate and makes it taste even more rich and delicious. You only need to add a small amount but it really does elevate the flavour.

The salt in the recipe also enhances the chocolate flavour. But don’t worry you won’t taste this either!

how to make smooth buttercream

My top tip to remember when making buttercream is to use room temperature butter. Make sure you get the butter out of the fridge plenty of time before you want to make your buttercream.

If you are making buttercream in the winter or when it is particularly cold, you will need to allow for more time for the butter to soften. On a warmer day in the summer, it will take less time. But watch it because you don’t want melted butter!

Add the milk a little at a time because you might not need it all. You want the buttercream to be smooth and soft so that it is easy to pipe. You don’t want it to be so wet that it won’t hold it’s shape when piped.

how to decorate your cupcakes

You can decorate these Small Batch Chocolate Cupcakes however you like – let your creativity flow!

I like to use a star shaped nozzle when piping these cupcakes. A 1M or a 2D nozzle are my go-to nozzles for this kind of piping. It is quite a lot of frosting but its nice to be a bit indulgent!

You can then decorate with any sprinkles, grated chocolate or whatever you have at home that you think would work.

how long will these cupcakes keep for?

These cupcakes will keep for 3-4 days in an airtight container. After this they will start to get a little bit dry.

If you wanted to make these cupcakes in advance, you can freeze them before they have been decorated. Wrap them tightly in cling film and freeze for up to three months.

Although this chocolate buttercream is delicious, it is always good to have other options!

My Chocolate Cream Cheese Frosting would be incredibly delicious on top of these cupcakes. You would just need to divide the recipe by three to get enough to frost six cupcakes.

If you would prefer vanilla buttercream, use the buttercream from my Small Batch Vanilla Cupcakes recipe.

When you want that chocolate fix but you don't want to bake a full batch, these Small Batch Chocolate Cupcakes are perfect. Share them or keep them all for yourself!