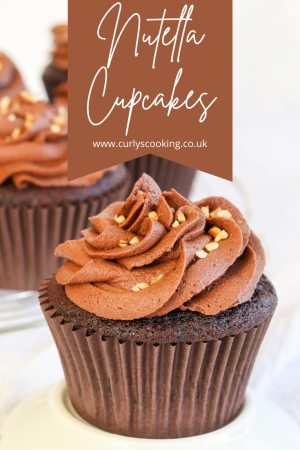 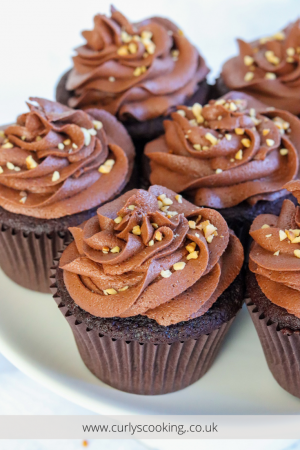 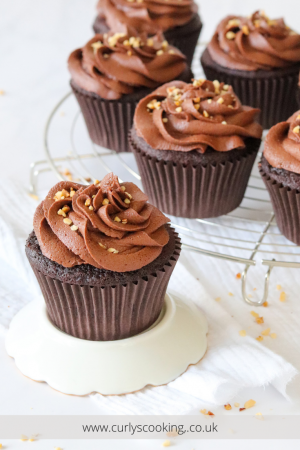 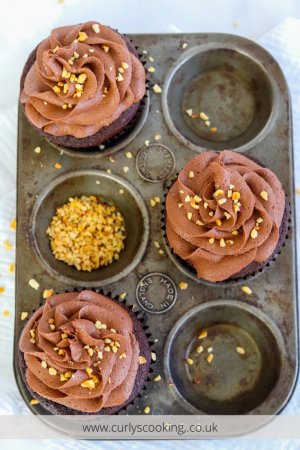 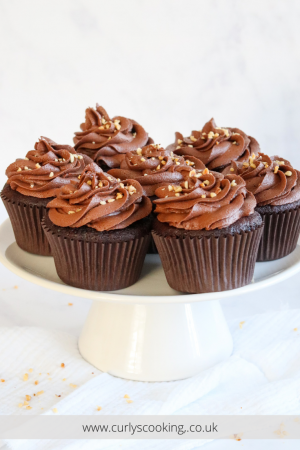 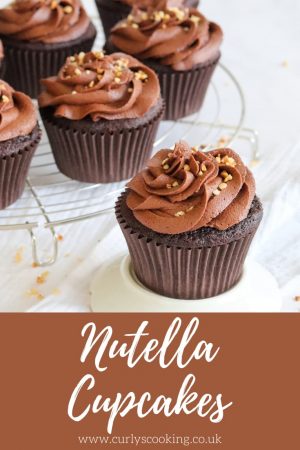 If you’re a Nutella fan, you need to try these Nutella Cupcakes. Not only is the buttercream flavoured with Nutella but the cake itself is too – the more Nutella the better!

I am Nutella obsessed

There is no point hiding it. I am obsessed with Nutella. There is something about that chocolate nuttiness that I just can’t resist.

Everyone needs a good Nutella Cupcakes recipe – me included; which is why I have developed one!

Some recipes work out straight away and others take a little bit more trial and error to get them perfect. This Nutella Cupcakes took a few attempts and several taste testers until I was completely happy with them.

And now, these are one of my favourite cupcake recipes ever!

Nutella is an Italian branded sweetened hazelnut cocoa spread. There are lots of other varieties of chocolate hazelnut spread, but Nutella is the most well known.

I did realise a few years ago that Nutella contains palm oil. However, they have since changed their recipe and now only use sustainable palm oil.

If you don’t want to use any products that include palm oil, then Gü have a delicious palm free version.

Nutella Cupcakes with a difference

My Nutella Cupcakes are a bit different to other recipes you might find.

I wanted to make the sponge flavoured with Nutella as well as the frosting. A double hit of Nutella goodness. What could be better?!

I know some people hate the word moist, but it really is the best way to describe these delicious cupcakes.

When it comes to chocolate cake, I think of two types. What I refer to as ‘British’ chocolate cake such as my Small Batch Chocolate Cupcakes and Chocolate Orange Traybake. These have a fluffier texture and don’t use that many ingredients.

These Nutella Cupcakes are what I could class as ‘American’ chocolate cake. They typically use oil instead of butter as the fat element and often use yogurt, buttermilk or milk to make them super moist.

Both chocolate cakes are delicious and work better for different bakes.

Which cocoa powder is best to use?

Depending on where you live, there are different types of cocoa powder available. The distinction is more obvious in the US where they have Dutch processed and natural cocoa powder.

When making Dutch processed cocoa powder, the cocoa beans are washed in an alkaline solution which reduces the acidity. This means that it doesn’t react when mixed with bicarbonate of soda (baking soda).

Just make sure you don’t buy drinking chocolate and instead buy cocoa powder from the baking aisle.

I would recommend using Dutch processed cocoa powder for these Nutella Cupcakes. Read more about Dutch processed vs Natural Cocoa Powder over at Sally’s Baking Addiction.

No, don’t worry; adding coffee to the cupcakes does not make them taste like coffee.

Coffee is a flavour enhancer for chocolate so it helps make the chocolate taste even more chocolatey. The same applies for the salt, it doesn’t make the cupcakes taste salty, but instead enhances the flavour.

I measure out my boiling water and then add the coffee granules to it. I then leave it to cool slightly while I get the rest of the ingredients together. It is only a small amount of coffee but it definitely does the trick!

Which yogurt is best to use?

You can use any type of unflavoured yogurt in these Nutella Cupcakes.

Greek or Greek style yogurt tends to be a little thicker, but you can use natural yogurt just as easily.

I always use low or non fat yogurt which works perfectly in these cupcakes. You can of course use full fat if you prefer, it won’t make any difference.

How to measure the ingredients correctly

Don’t worry, I haven’t made a mistake and written the units for the liquid ingredients incorrectly. I really do mean grams!

I don’t trust my eyes using measuring jugs to measure out liquids. This is especially the case for recipes like these when it doesn’t call for a round volume such as 200ml.

So instead I weigh the liquid ingredients in a jug on my digital scales. This way everyone should be able to get exactly the right ingredients.

I know it might seem a little different but it does work!

Whenever I make buttercream, I always make sure I use room temperature butter. It makes it so much easier to incorporate which means you are less likely to get lumps of butter in your buttercream!

I also always beat the butter separately first before adding the rest of the ingredients. If it wasn’t already completely softened, this should help it along. I beat it for up to five minutes so it is really nice and soft.

You might not need to add all of the milk. Add a tablespoon at a time and beat well in-between. You’re looking for a soft, pipeable consistency.

You can use whichever piping tips you fancy for these. My favourites are 1M and 2D tips which create piping like you can see in the photos.

How long will these cupcakes keep for?

As with all cupcakes made with oil, they tend to keep longer. It helps them stay nice and moist for a few more days.

Keep these Nutella Cupcakes in an airtight container for 3-4 days. You don’t need to keep them in the fridge unless it is a very hot day and you’re worried about your buttercream melting!

If you're a Nutella fan, you need to try these Nutella Cupcakes. Not only is the buttercream flavoured with Nutella but the cake itself is too – the more Nutella the better!

The liquids in the recipe are meant to be in grams and not millilitres. Weigh the ingredients in grams on digital scales.

Keep the cupcakes in an airtight container for 3-4 days.