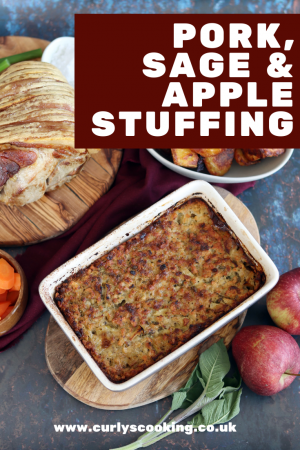 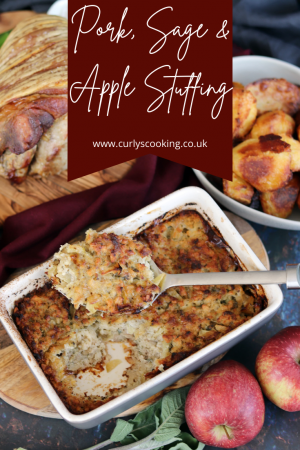 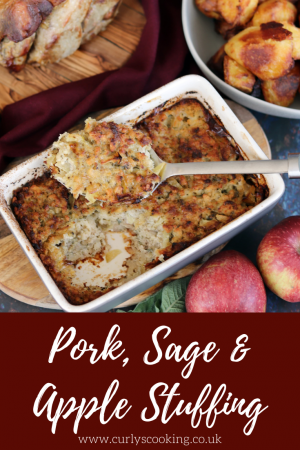 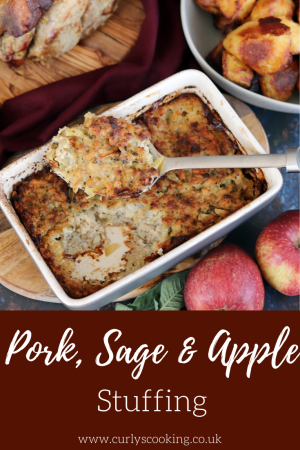 This Pork, Sage & Apple Stuffing is very simple to make and absolutely delicious. It is the perfect accompaniment to any roast dinner but especially pork.

Not everyone is confident enough or has time to make dishes completely from scratch. This Pork, Sage & Apple Stuffing is an adaptation of my Easy Sausage Meat Stuffing which is a family recipe.

Both recipes use a shop bought stuffing mix which then has other ingredients added to it to make a far tastier stuffing.

Most people probably have a packet of stuffing mix in their cupboards already and this recipe gives you a really simple way to make it that little bit special with hardly any effort.

Pork, sage and apple are three classic flavours that work so well together. They really compliment each other and help make this stuffing even more flavoursome.

Can I use dried sage instead?

Fresh sage is a really delicious addition to this stuffing. However if you don’t have any you can definitely still make this!

Instead of fresh sage, use one tablespoon of dried sage. You will still get the lovely sage flavour. If you don’t have dried sage, herbs like rosemary and thyme would work nicely too.

What type of apples are best to use?

You can use whatever apples you have in your fruit bowl for this stuffing. You don’t have to chop the apple up particularly neatly or finely either.

This Pork, Apple & Sage stuffing is really simple to make. This is a huge advantage because roasts can be a little stressful – especially for a special occasion like Christmas. Or is that just me?

If you’re cooking your meat at a different temperature than stated in the recipe, don’t panic! Just adjust the cooking time to cook it for a little more or a little less. You’re looking for a lovely brown colour on top with slightly crisp edges. Between 45 minutes to 1 hour should suit most cooking temperatures.

This doesn’t just have to be served with roast dinners

This Pork, Sage & Apple Stuffing doesn’t just have to be served with roasts. Mr Curly would have it with every dinner if I let him!

It would be really tasty with a pork chop or chicken breast. You could also serve it with my Potato & Thyme Stacks and Roasted Parmesan Tenderstem Broccoli.

It is simple enough that it doesn’t have to just be saved for the weekends when you have more money. It can easily be made during the week.

Make sure you have leftovers

Always make more than you think you will need! When I make this for Mr Curly and I, I half the quantities below. This ensures we have enough for dinner and leftovers.

Once people have tried some, they will want to keep going back for more. So make more than you think you will need to avoid disappointment!

It is really delicious the next day in a sandwich with thick white bread and any leftover meat. You don’t need to reheat it and it is really tasty cold.

This stuffing would also be delicious served the next day with Bubble & Squeak.

This Pork, Sage & Apple Stuffing very simple to make and absolutely delicious. It is the perfect accompaniment to any roast dinner but especially pork.

If the meat you are cooking requires a different temperature, adjust the cooking time for the stuffing. If the temperature is lower, cook for 10 minutes or so longer. If it is higher, cook on a lower shelf for 45 minutes or until the sausage meat is cooked through.