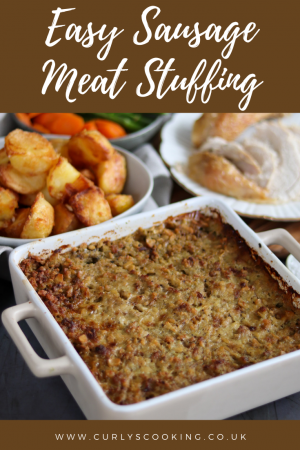 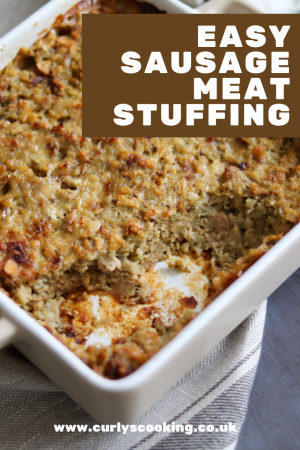 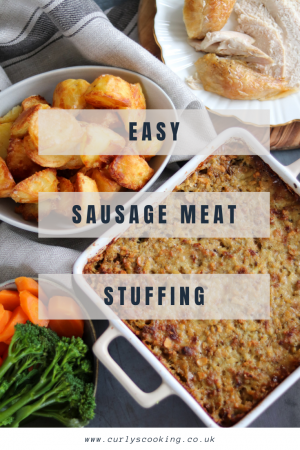 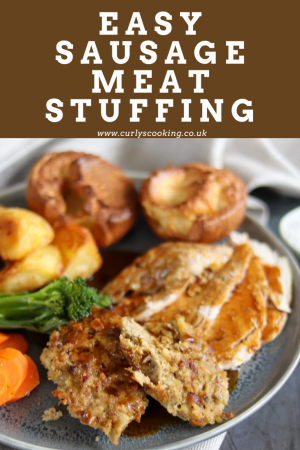 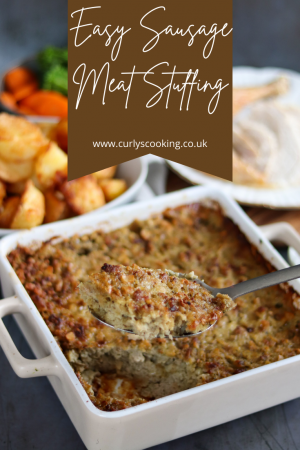 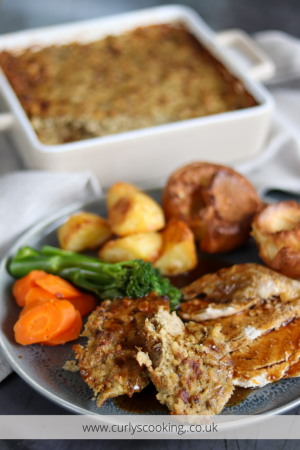 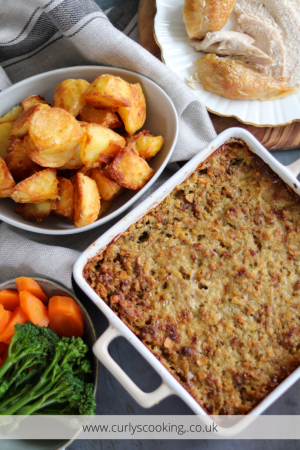 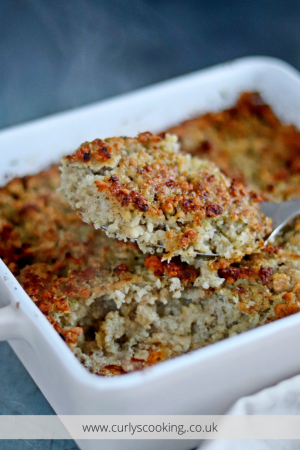 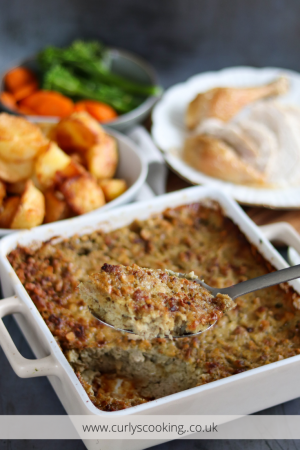 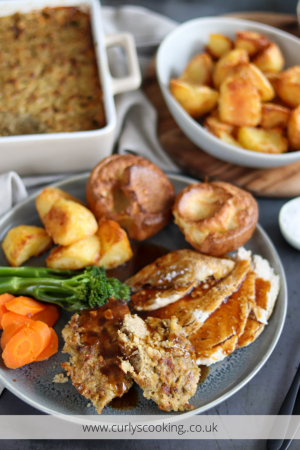 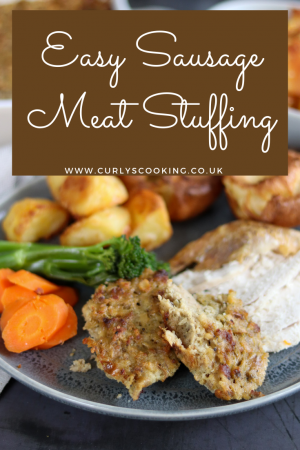 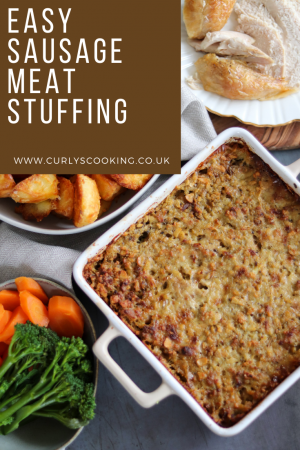 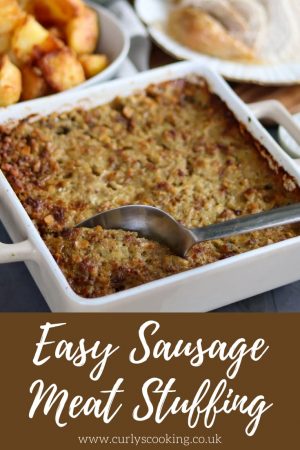 Easy Sausage Meat Stuffing is the perfect side dish to any roast dinner. It is incredibly simple to make and will take your roast dinner to the next level. 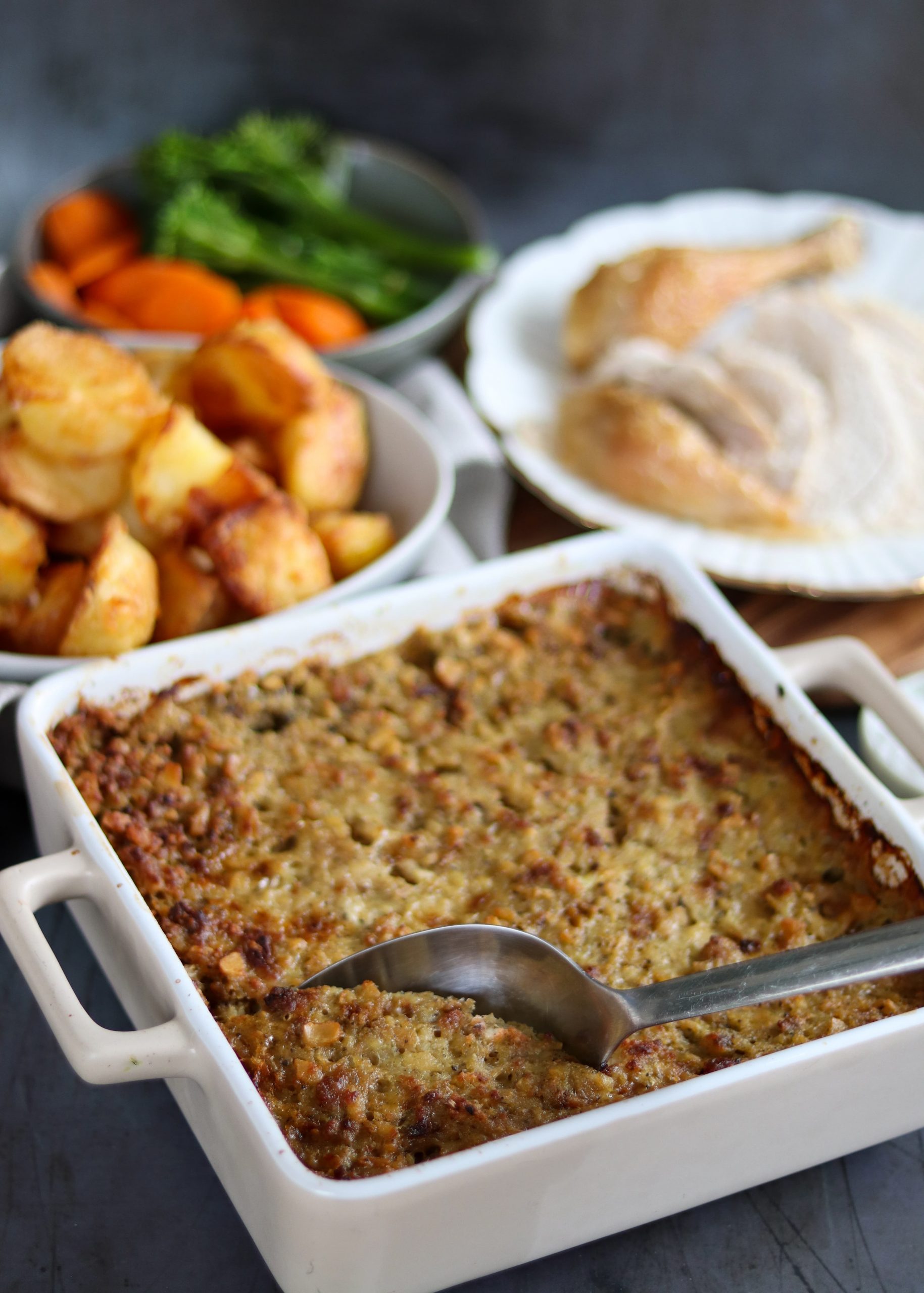 Do you love stuffing?

I was never really a fan of stuffing. It was something I would often rather not have on my plate when eating a roast to allow for more room for roast potatoes!

My view towards stuffing changed when I tried my Father-in-law’s stuffing.

Mr Curly and I met when I was at university going my undergrad course and he was studying for his PhD. He had recently moved back home whilst studying which meant that at weekends I would travel down the motorway to see him. 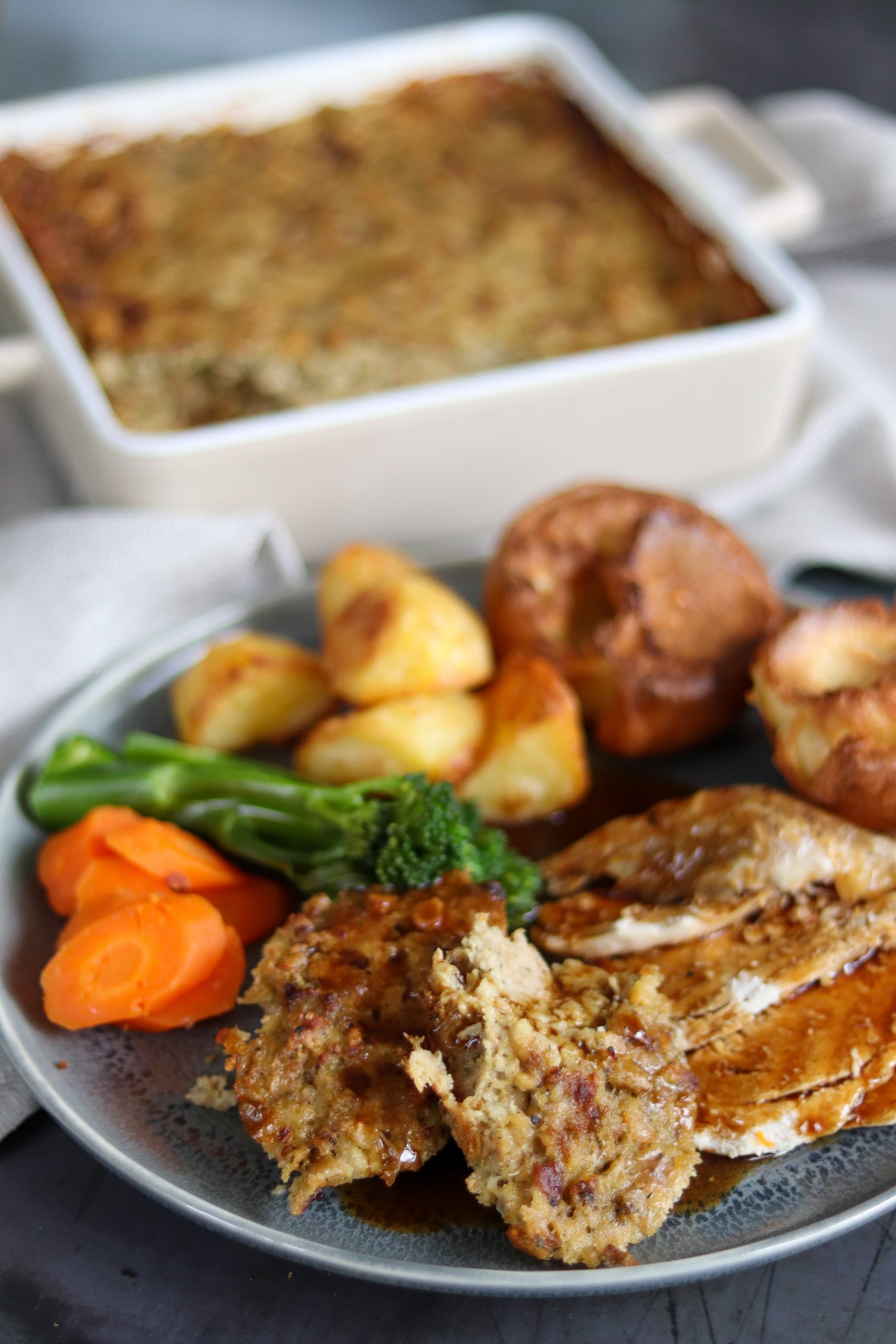 Like lots of people, Mr Curly’s parents would cook a roast on a Sunday. I remember always being offered the meat first (usually chicken); because they are lovely people and thought the guests should get the best meat.

The best meat in most of their opinions was the breast meat so I felt obliged to take some. It was months down the line that I told them I actually preferred the dark meat!

The most memorable part of these roasts was Mr Curly’s Dad’s stuffing. I don’t remember having stuffing with sausage meat before.

My Mum made an oatmeal stuffing which is traditional in Aberdeen and sage and onion stuffing; but never stuffing with sausage meat. 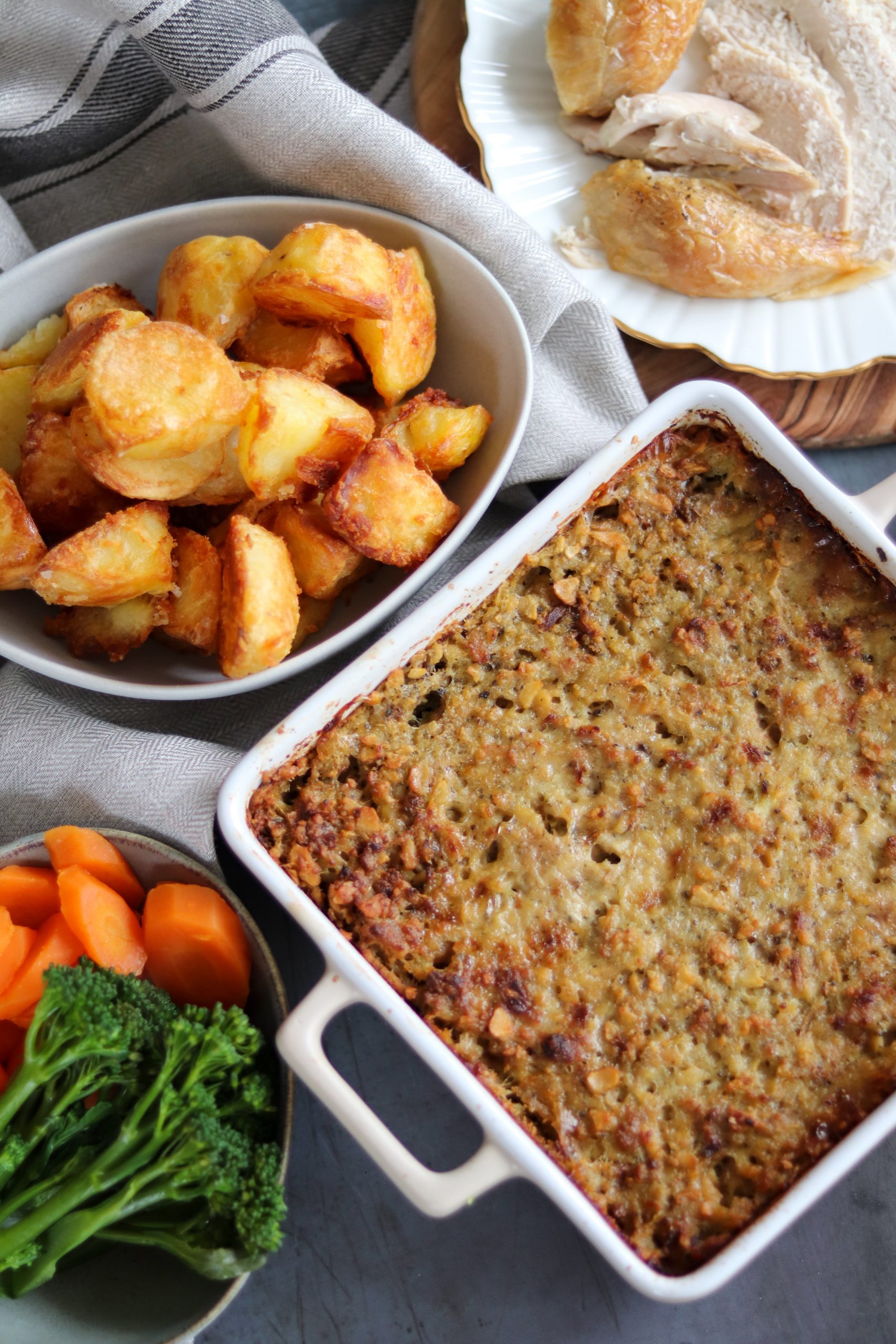 Delicious & so easy to make

The sausage meat not only adds flavour but also moisture. So many stuffing balls you see look so dry and like you’d need a litre of gravy to be able to eat them. This Easy Sausage Meat Stuffing is the complete opposite.

What makes this so easy is that you can mix it all together and let it cook in the oven. There is no need to form into balls which is vital time you can use doing something else when preparing a roast!

Plus you’re going to want a lot of this Easy Sausage Meat Stuffing so a large spoonful is better than a small ball! 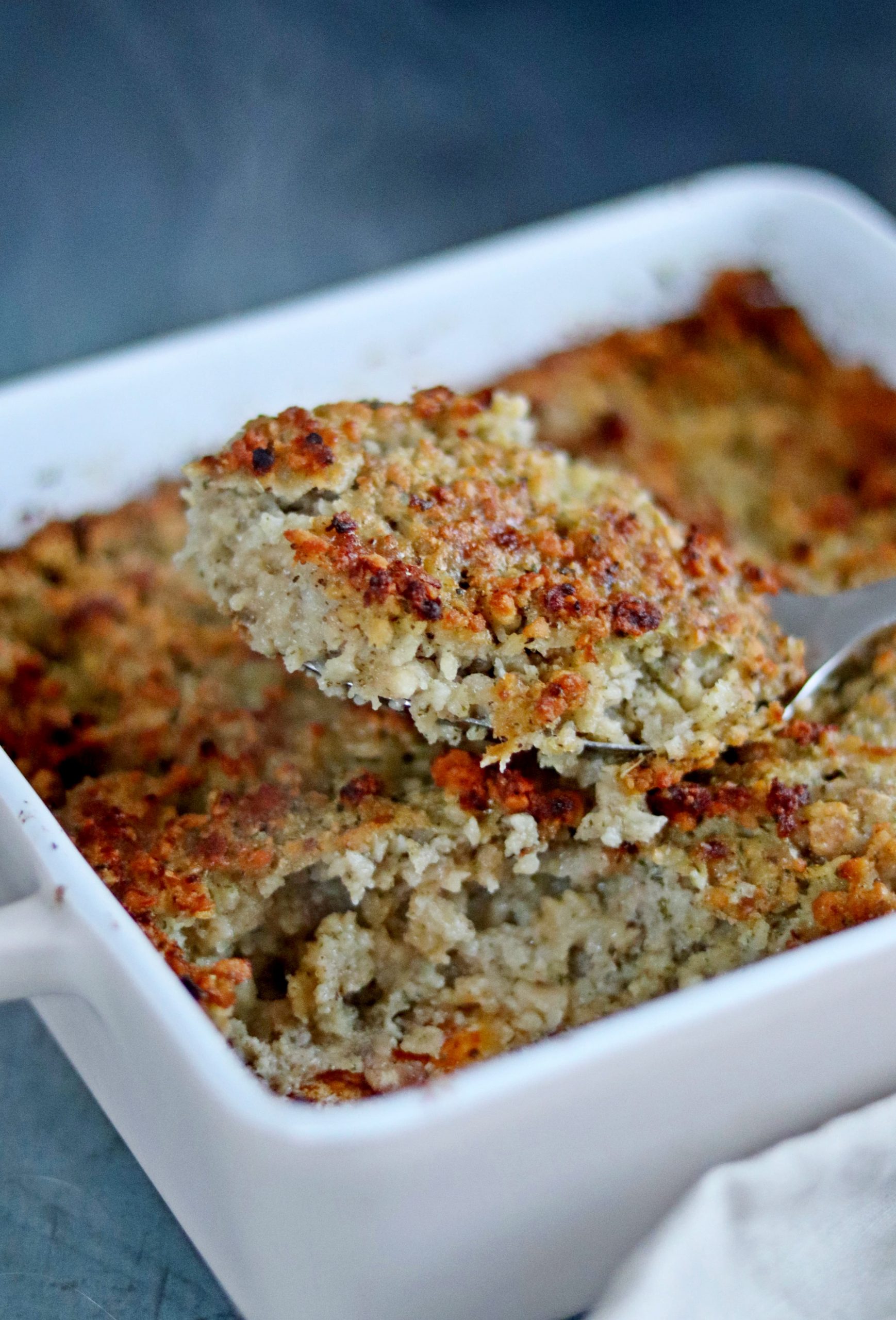 The main outcome from cooking is to make a delicious meal. If this involves a few shortcuts then I don’t think this matters at all.

This Easy Sausage Meat Stuffing uses ready made sage and onion stuffing as a base. It is a quick and easy way to add flavour without having to make the breadcrumbs and add the flavourings yourself.

I think this is especially invaluable when you are making a roast dinner. Surely it can’t be just me that seems to get a little flustered when I have so many things on the go at the same time?!

I’m not saying buy frozen roast potatoes; but I think using the ready made sage and onion stuffing is shortcut worth taking. 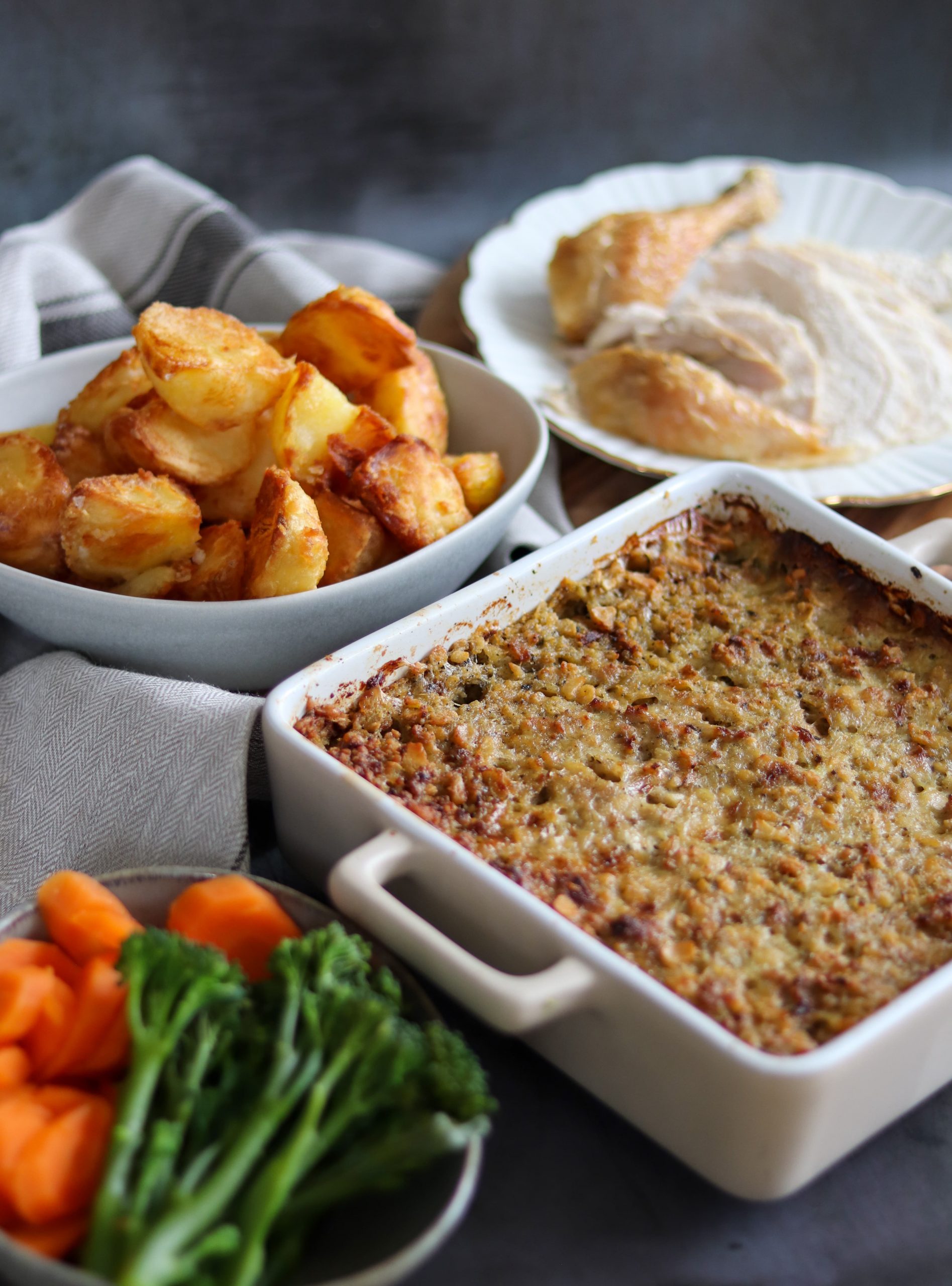 What to serve this Easy Sausage Meat Stuffing with

I’d serve this with any roast dinner, but definitely for Christmas lunch! Make sure you make enough for everyone to have plenty, plus leftovers for a cold turkey and stuffing sandwich!

This stuffing doesn’t just have to be part of a roast dinner though. It is so quick and easy to make you could have it with any grilled meat or sausages any day of the week.

If you’re having pork or just fancy a change, try my Pork, Apple & Sage Stuffing instead. 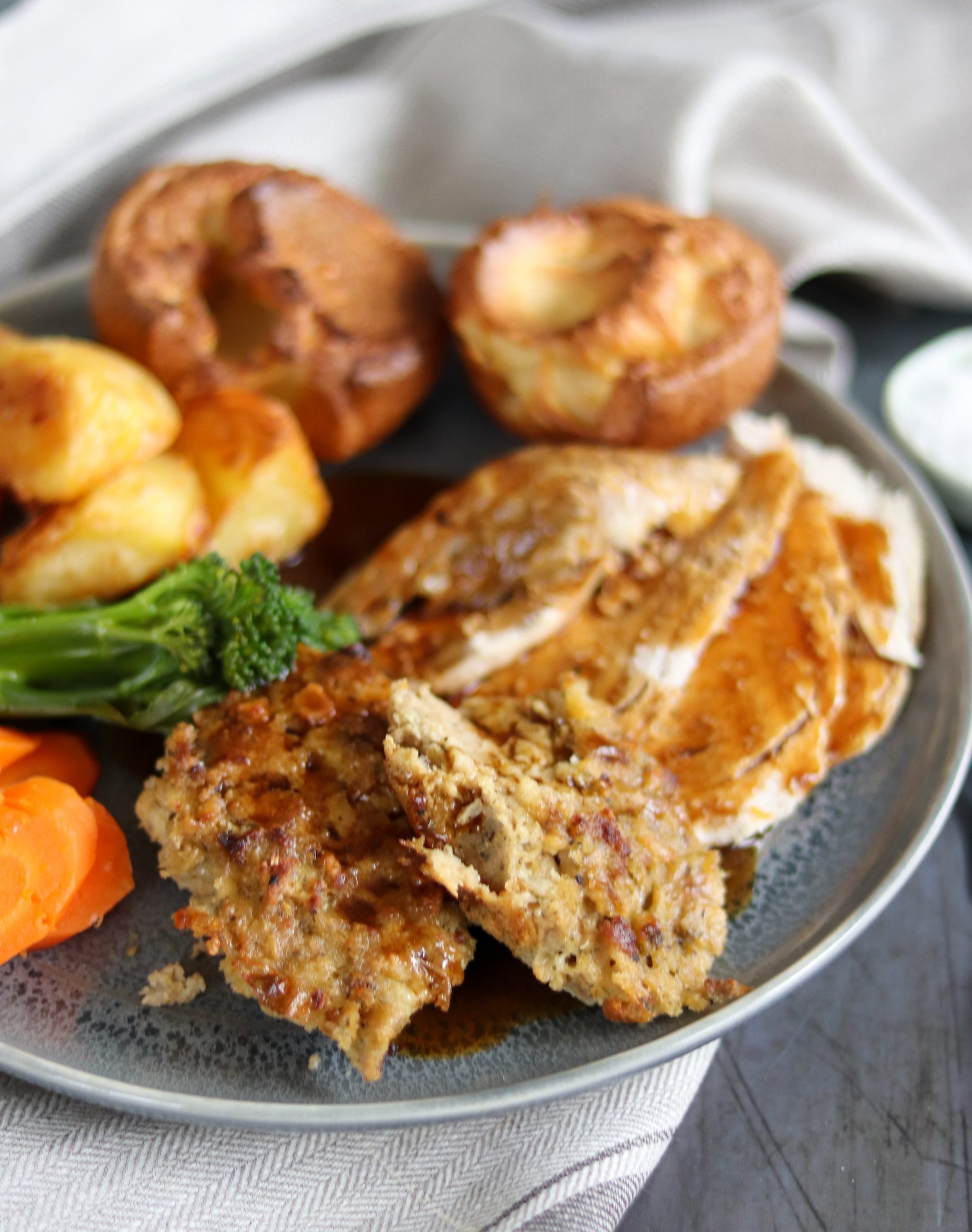 Easy to feed a crowd

If you’re catering for people like Mr Curly who are stuffing fanatics, you can easily add another pack of stuffing mix to help stretch the sausage meat further.

This helps bulk out the stuffing without needed to add more sausage meat. I would also add another egg to help bind the stuffing.

If you are feeding a really big crowd, you can obviously add more sausage meat as well as more stuffing mix. 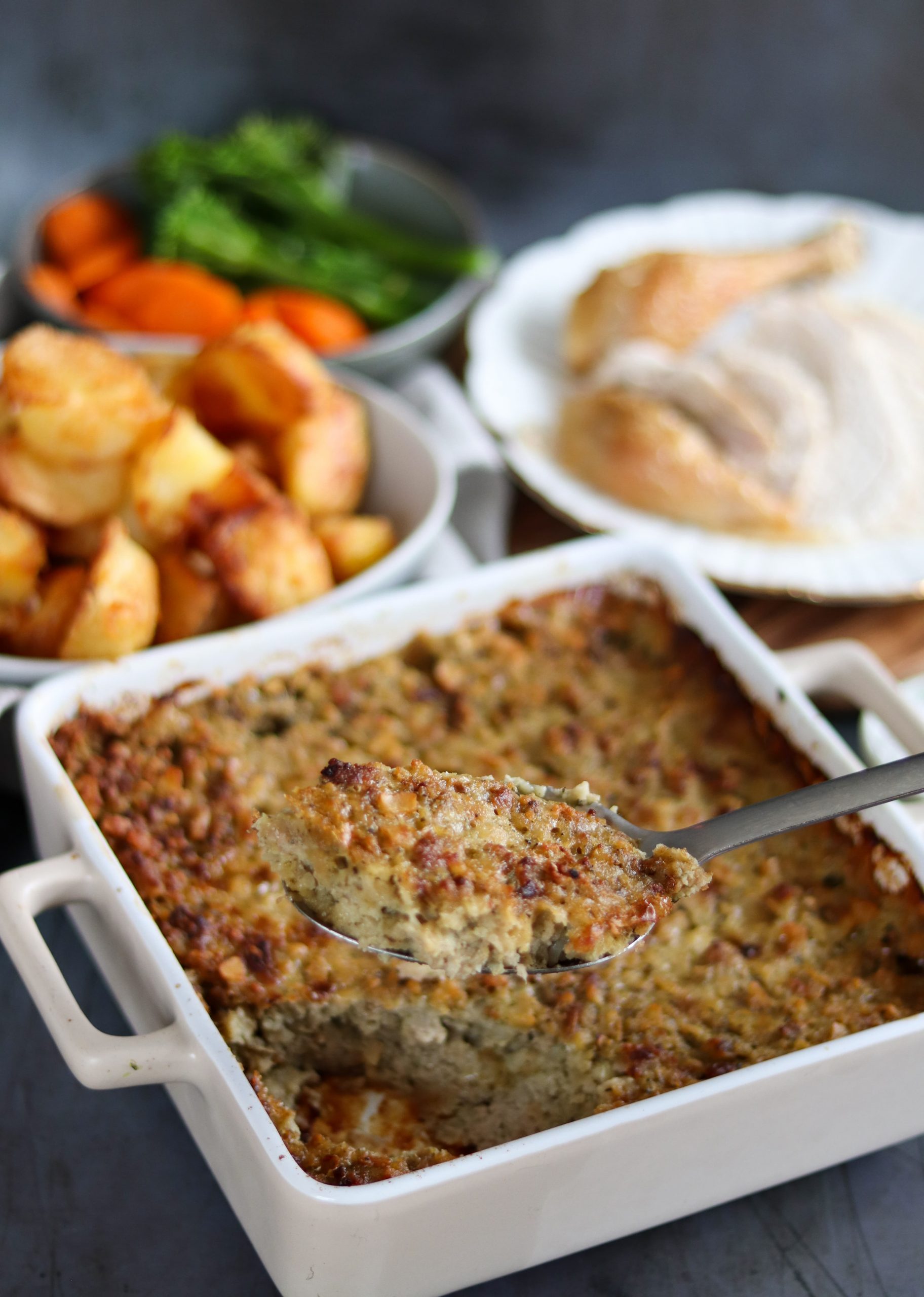 How much water should be added?

I have noticed that different packets of stuffing mix require you to add different amounts of water.

The well known brand Paxo, needs less water than some supermarket own brands. The recipe below shows the amount Paxo recommend adding but make sure you check the packet of the brand you have.

I noticed Lidl’s stuffing mix needed over 500ml of water so it is definitely worth checking. 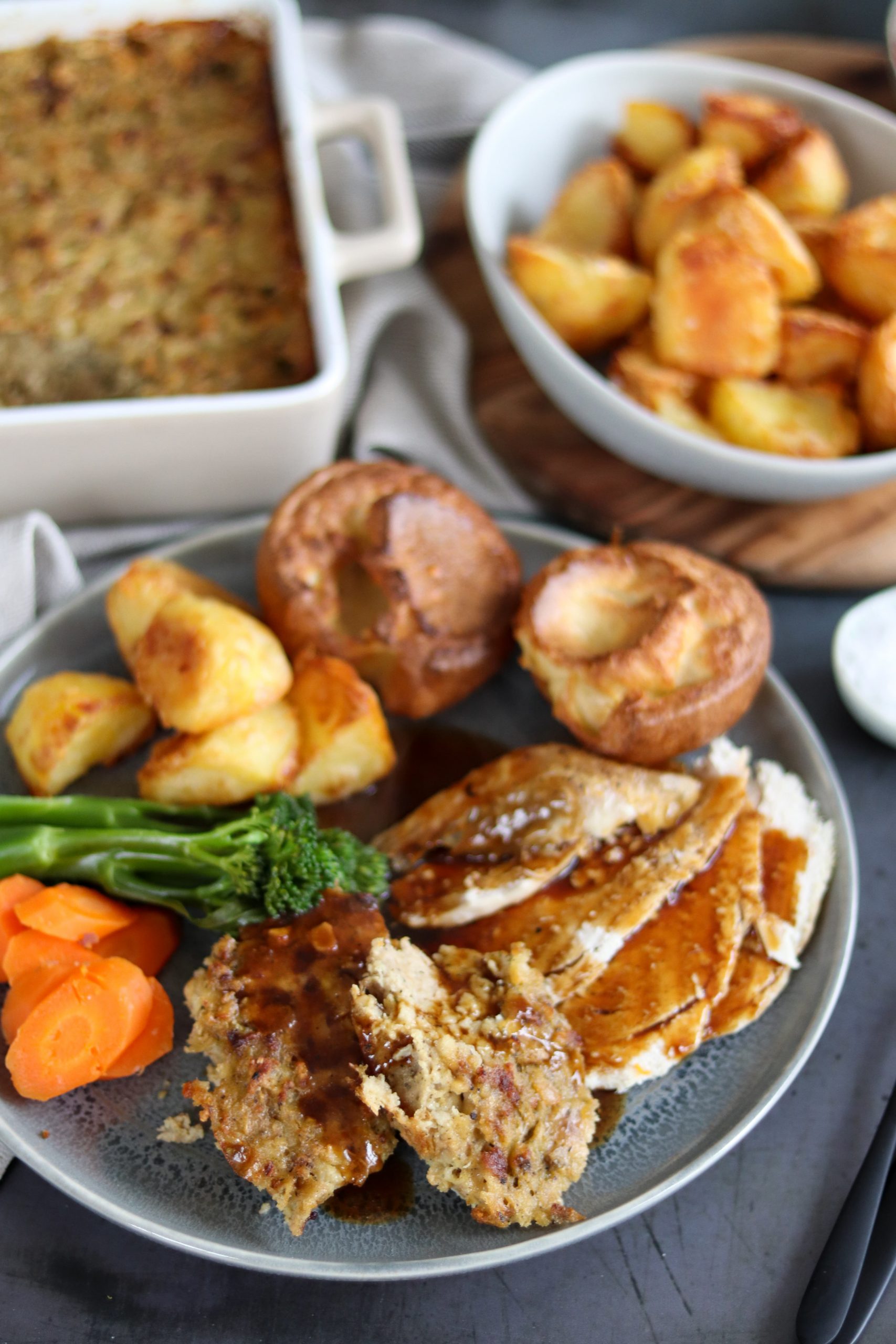 Can I add different flavours?

At Christmas especially, you can get some delicious sausage meats with added flavours such as cranberries and honey.

Obviously you could add these flavours yourself, but this is called Easy Sausage Meat Stuffing after all so you will be forgiven to buy the sausage meat with added flavours should you wish to.

My Pork, Apple & Sage Stuffing is an example of how you can add flavours to the stuffing to make it a bit more special. 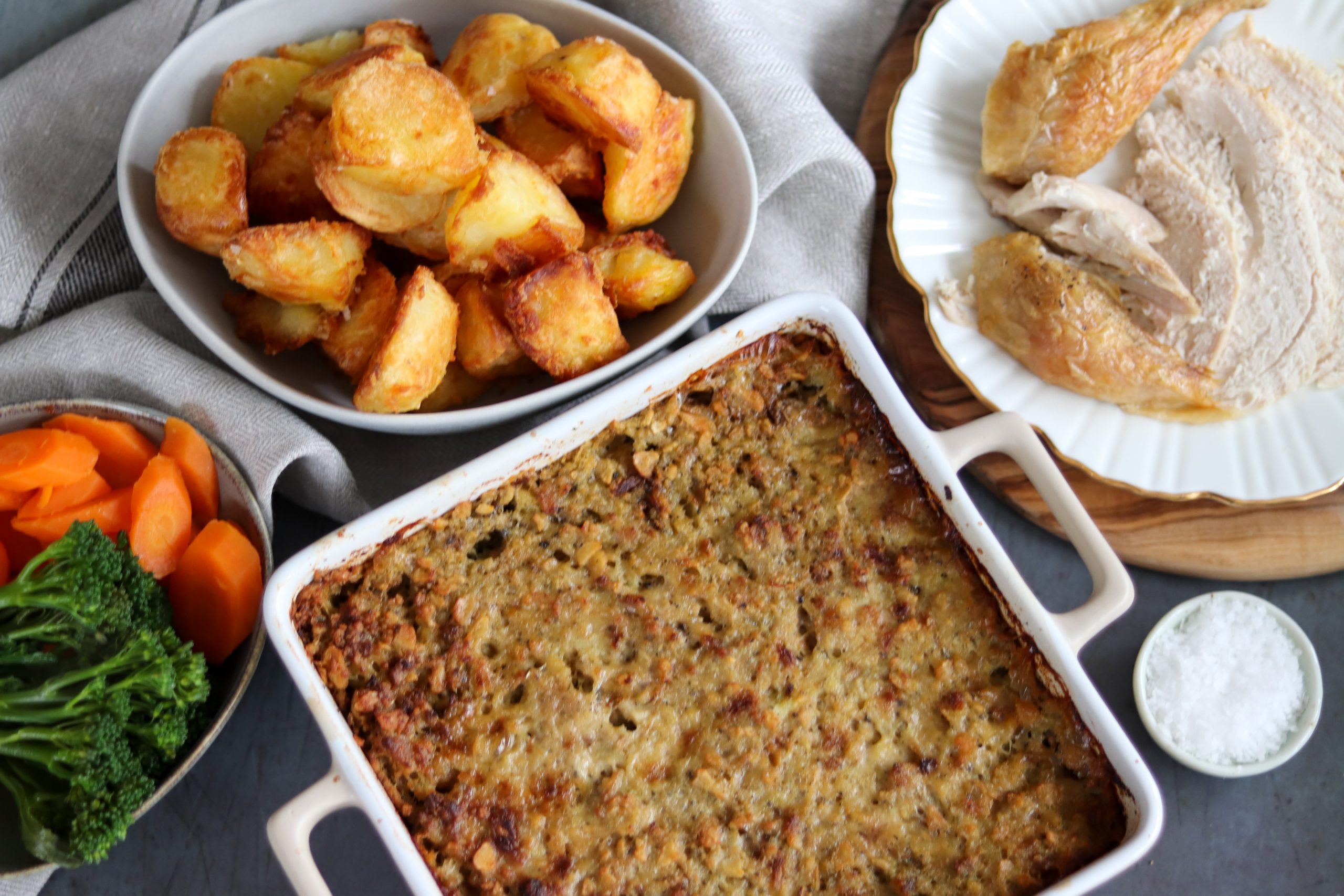 make your stuffing ahead of time

Roast dinners can get a little bit hectic as there are so many elements to prepare and cook.

To save yourself time and to get ahead, you can prepare this stuffing in advance.

Mix all of the ingredients together and keep it in the fridge until you are ready to cook. It will be fine in the fridge for two to three days. 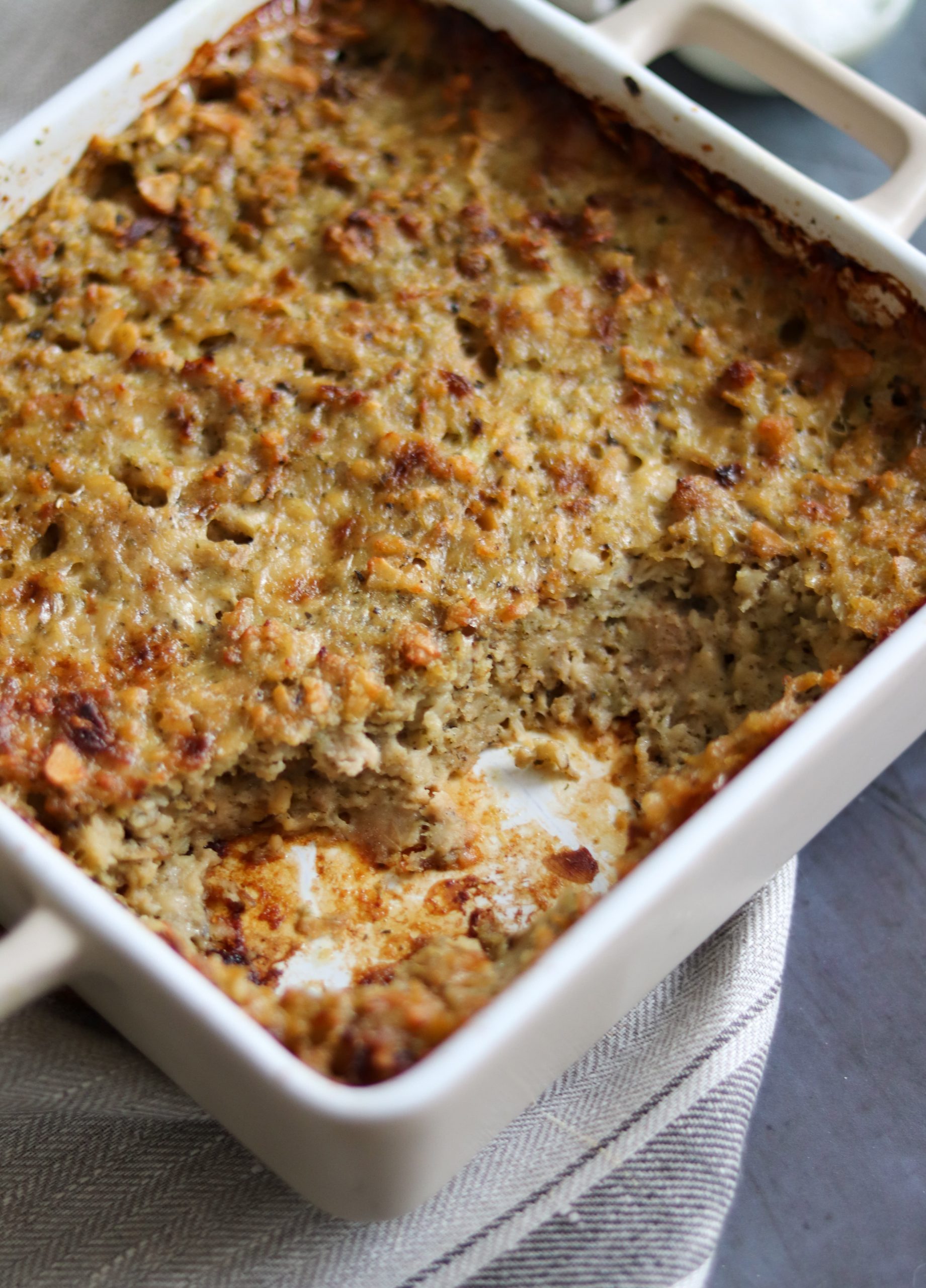 What to do with leftover stuffing

If you’re lucky enough that everyone hasn’t eaten all of the stuffing, it makes great leftovers. It is particularly tasty in thick white bread along with some leftover meat from your roast.

You don’t have to worry about reheating it as it is delicious cold. Store it in the fridge for up to two days.

It would also be delicious the next day served with Bubble & Squeak.

How to freeze this stuffing

You can freeze the stuffing for up to three months. You can freeze either raw or cooked. This would one of the rare occasions I would recommend a foil disposable container.

If you want to freeze it raw, mix all of the ingredients apart from the butter on the top. When you want to use the stuffing, leave it to defrost in the fridge overnight. Add the butter to the top and cook as per below.

If you want to cook the stuffing before freezing it, cook exactly as per below. Put it in the freezer within two hours of it finishing cooking.

Defrost in the fridge overnight and cook in the oven until piping hot throughout. You might want to cover it with foil so it doesn’t get too brown on top. 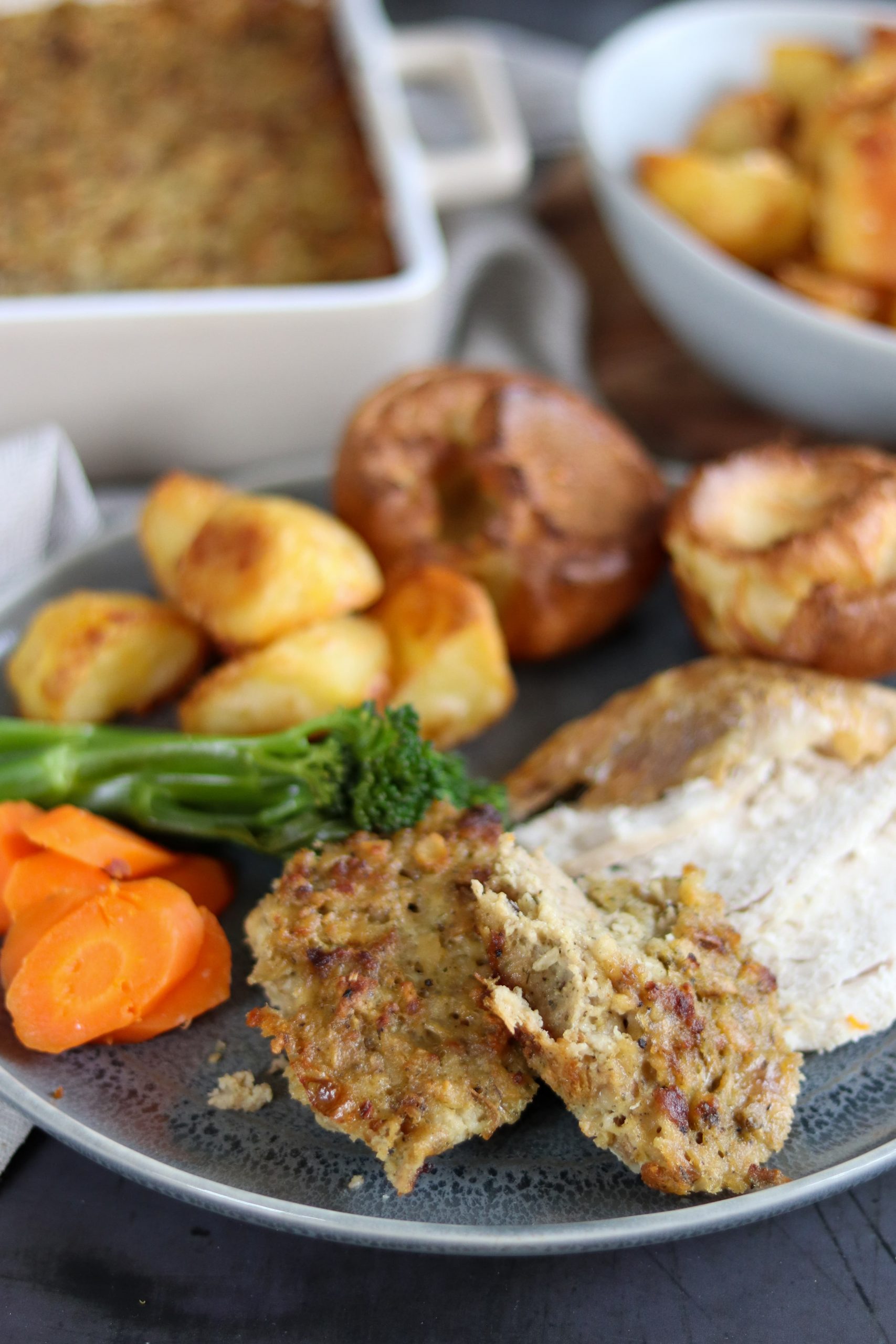 Can this stuffing be made gluten free?

Gluten free sage and onion stuffing mix should be easily available in your supermarket’s free from section. 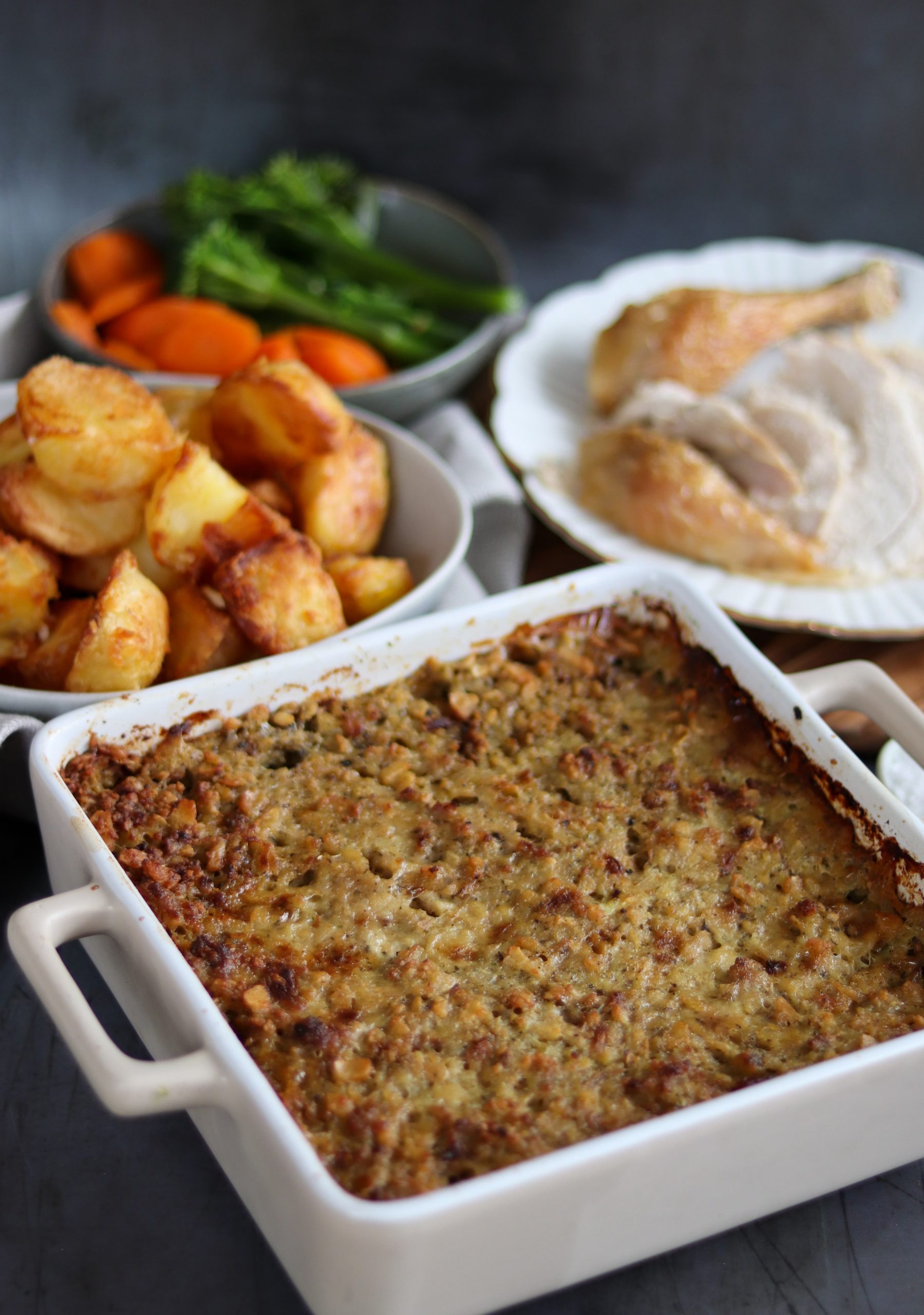 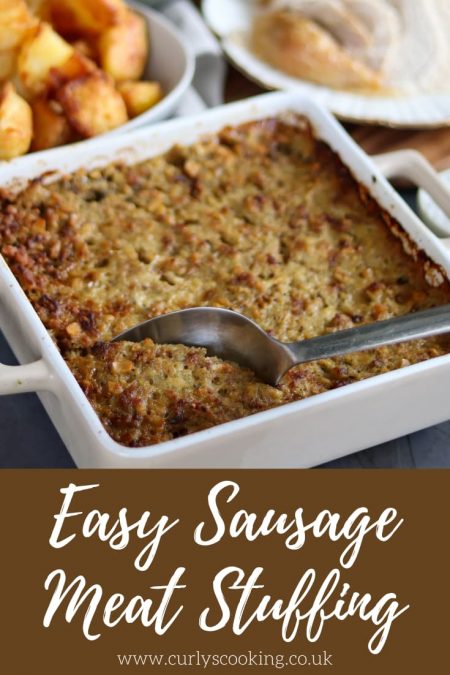 Easy Sausage Meat Stuffing is the perfect side dish to any roast dinner. It is incredibly simple to make and will take your roast dinner to the next level.

If the meat you are cooking requires a different temperature, adjust the cooking time for the stuffing. If the temperature is lower, cook for 10 minutes or so longer. If it is higher, cook on a lower shelf for 45 minutes or until the sausage meat is cooked through.