Tender, citrus flavoured pork; if you haven’t tried Slow Cooker Cuban Pork before you’ll want to now! With this one recipe there are so many ways to enjoy it and make the most of any leftovers. 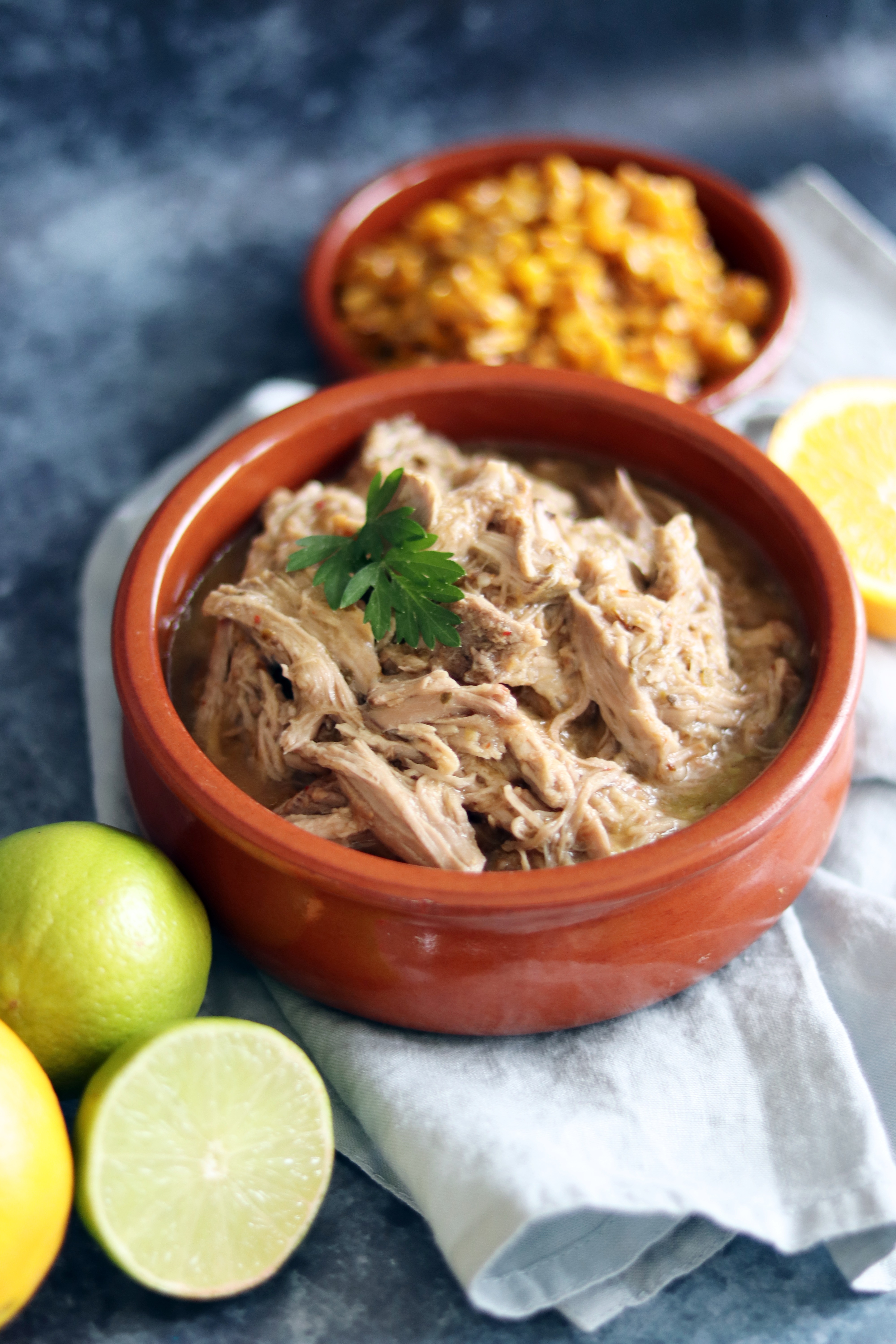 What is Slow Cooker Cuban Pork?

I hadn’t heard of Cuban Pork until I stumbled across a recipe on Pinterest years ago. As with lots of pins on Pinterest, I forgot about it until recently. I did some research and found that the common ingredients in Cuban Pork is citrus juice; usually lime and orange juice and cumin.

I love cooking large joints of meat in the slow cooker because it helps keep them really tender. It is also an incredibly easy way to cook them because as long as you have enough liquid so it doesn’t dry out, you can really leave it alone. 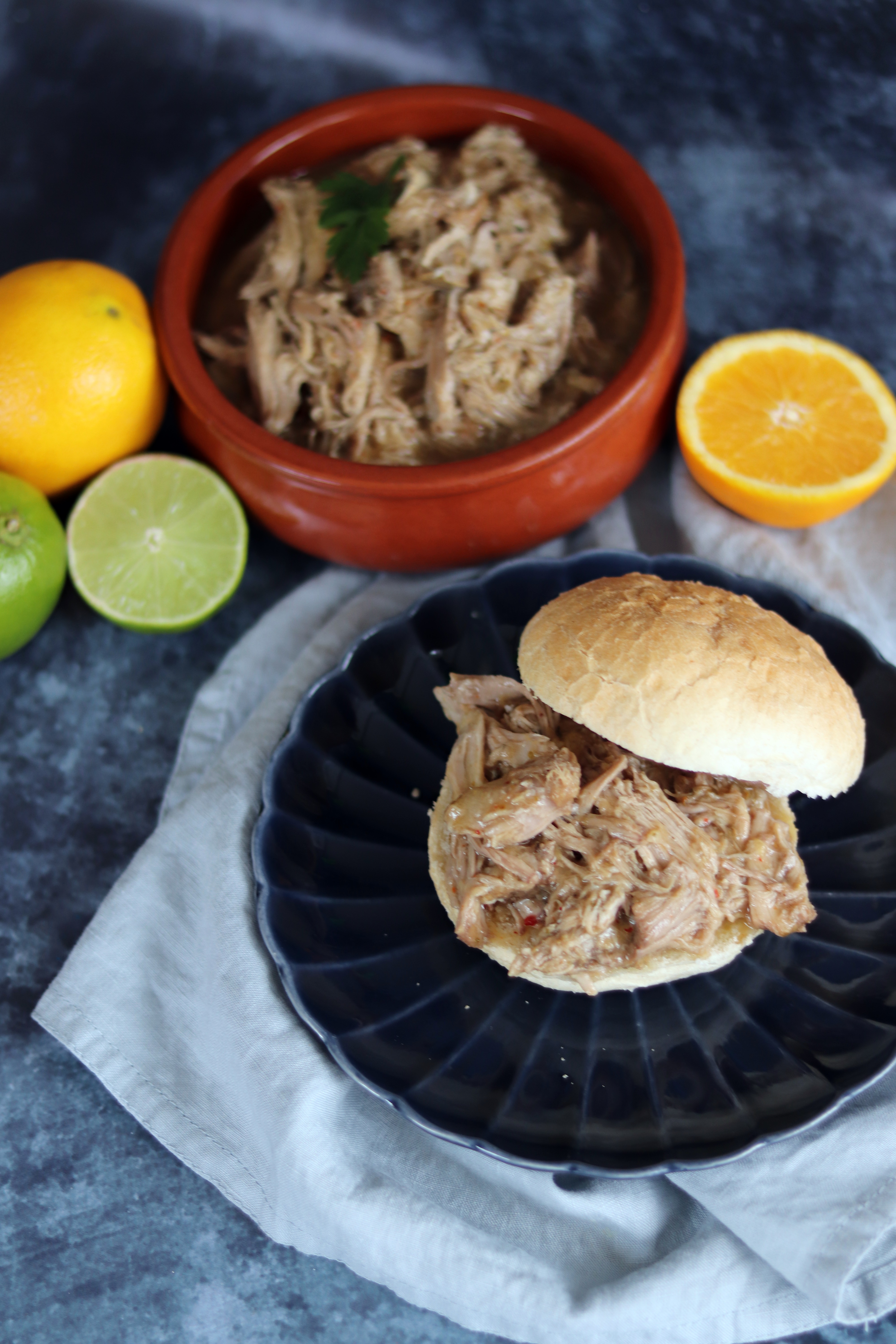 Sometimes you do want to be hands on in the kitchen and make something that needs concentration. And then other times you don’t!

This Slow Cooker Cuban Pork couldn’t be easier because you essentially chuck it all in the slow cooker in the morning and it’s ready by dinner time! 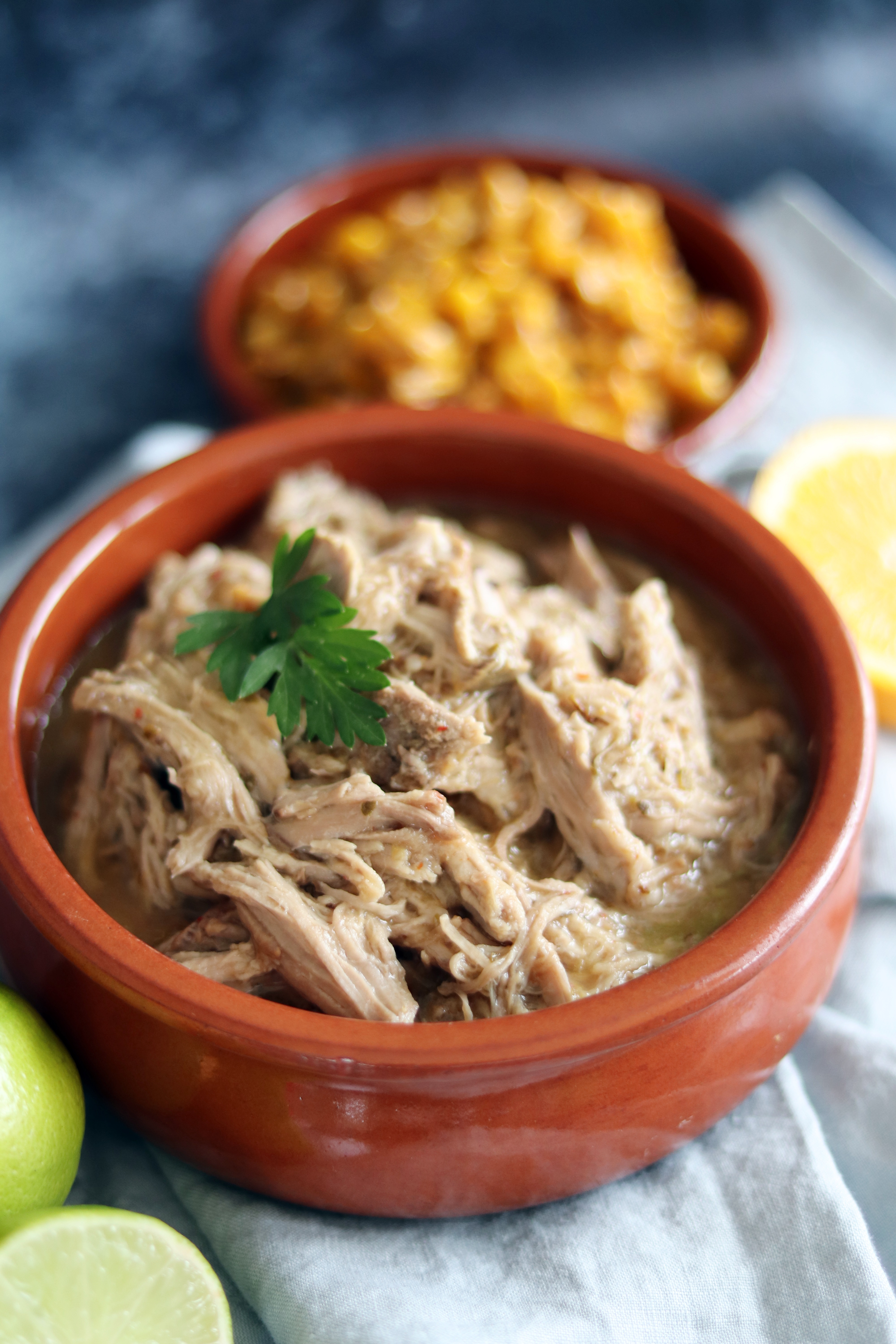 To make things even easier, I kept the fat and rind on the pork shoulder. It is much easier to remove from the meat once it has cooked because it will easily pull away.

By leaving the fat on, it also helps keep the meat extra moist in my opinion. If when you buy you pork it doesn’t have the fat and rind on it, that obviously isn’t a problem!

After you have removed the fat, the most taxing thing you will have to do for this recipe is shred the pork. By this time the pork is so tender it is incredibly easy to shred. 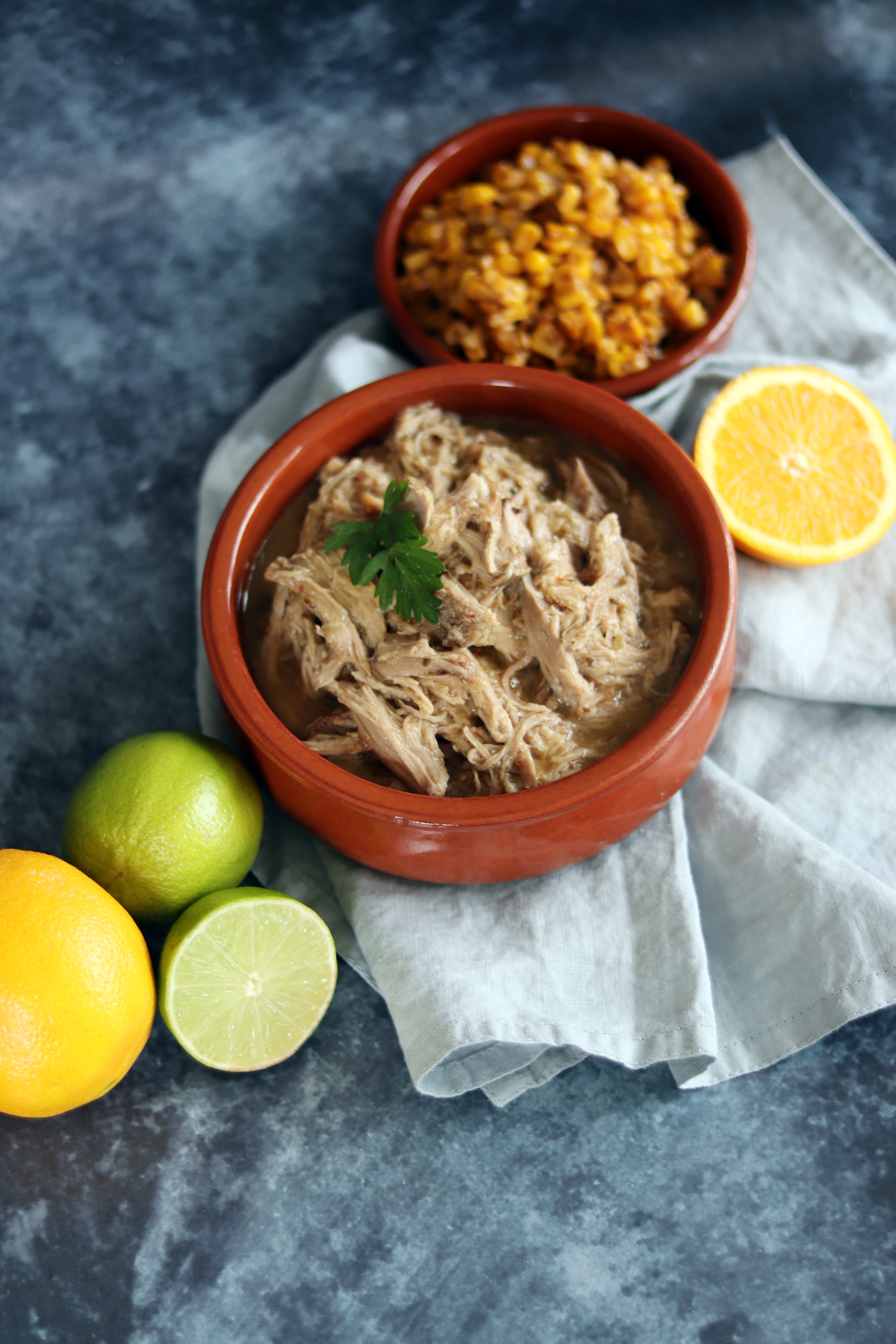 One of my favourite things about this recipe is its versatility. Cuban Pork is traditionally served with rice and black beans with some of the cooking juices drizzled over.

The way I served initially was in a Bread Roll or Easy Flatbread along with my Mexican Sweetcorn Salad or Coleslaw. If you would like to serve it like this, I would recommend allowing the juices to drain off if you don’t want them dripping down your arm!

A simple way to do this would be to heat some of the pork in a dry frying pan for a couple of minutes.

When making this Slow Cooker Cuban Pork, my plan was to use it for multiple recipes. The quantities in this recipe would feed 6-8 people.

But you really want to make sure you have some leftovers to make my Cuban Pork Sandwich and Quick Pulled Pork Pizza. Look out for these recipes coming in the next few weeks! 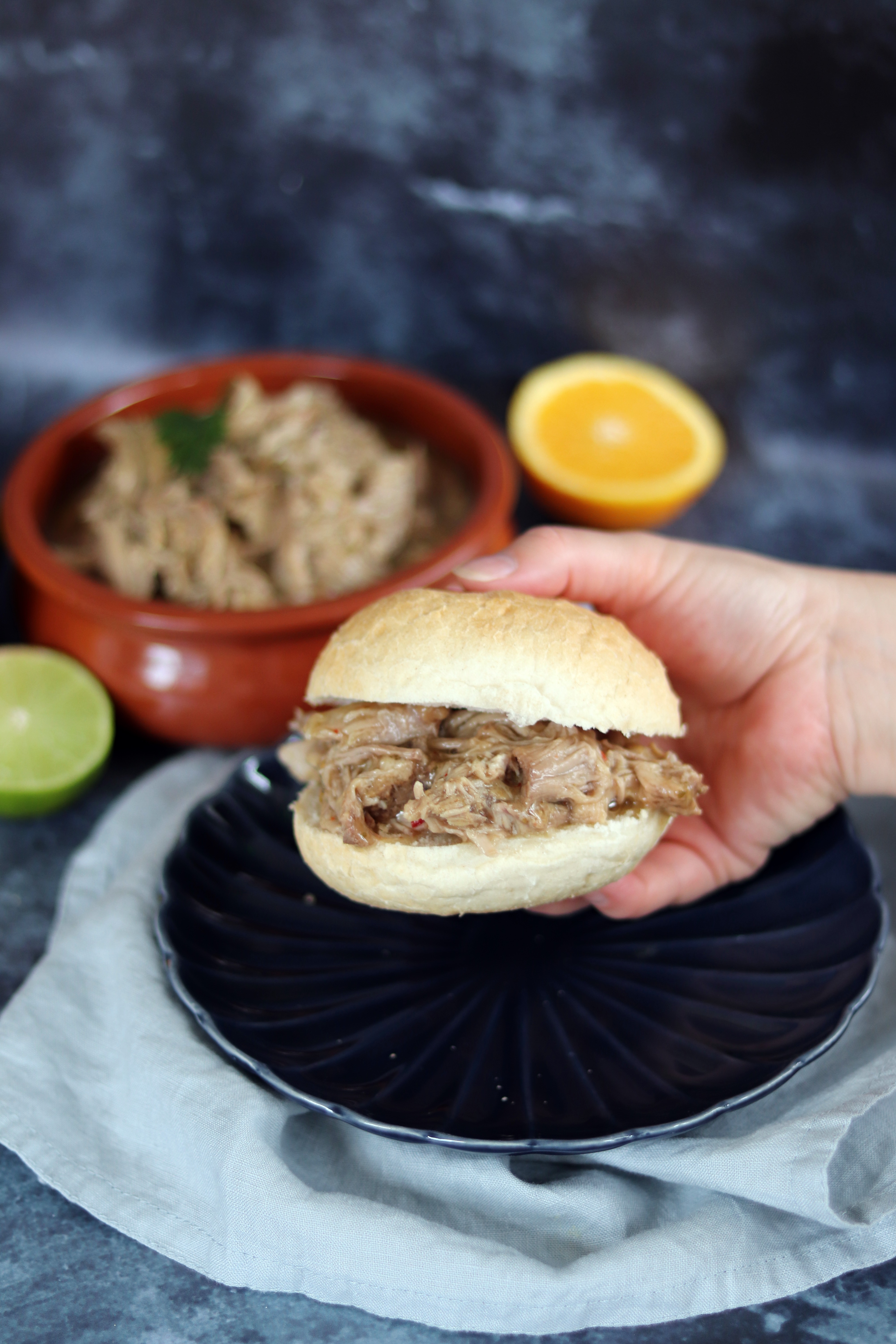 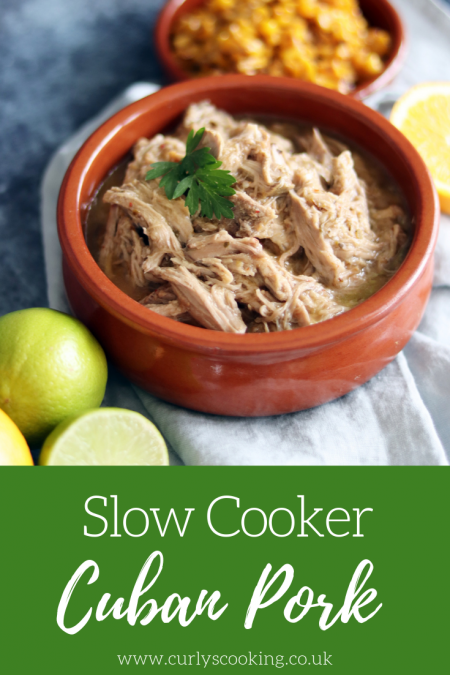 Tender, citrus flavoured pork; if you haven't tried Slow Cooker Cuban Pork before you'll want to now! With this one recipe there are so many ways to enjoy it and make the most of any leftovers.