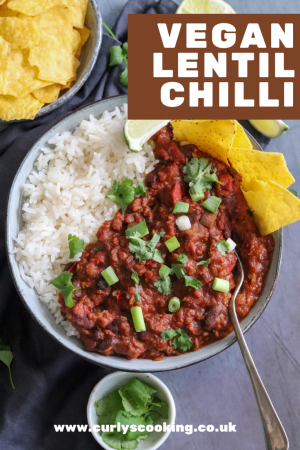 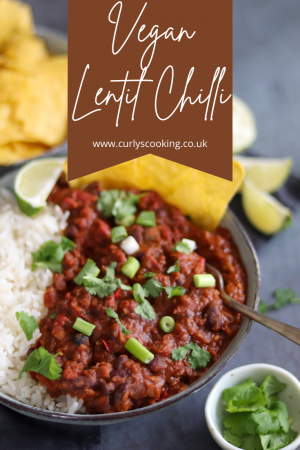 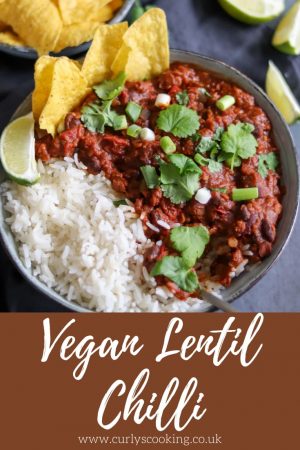 Delicious and comforting with a touch of spice. This Vegan Lentil Chilli is such an easy slow cooker meal that is packed full of flavour. You definitely won’t miss the meat! 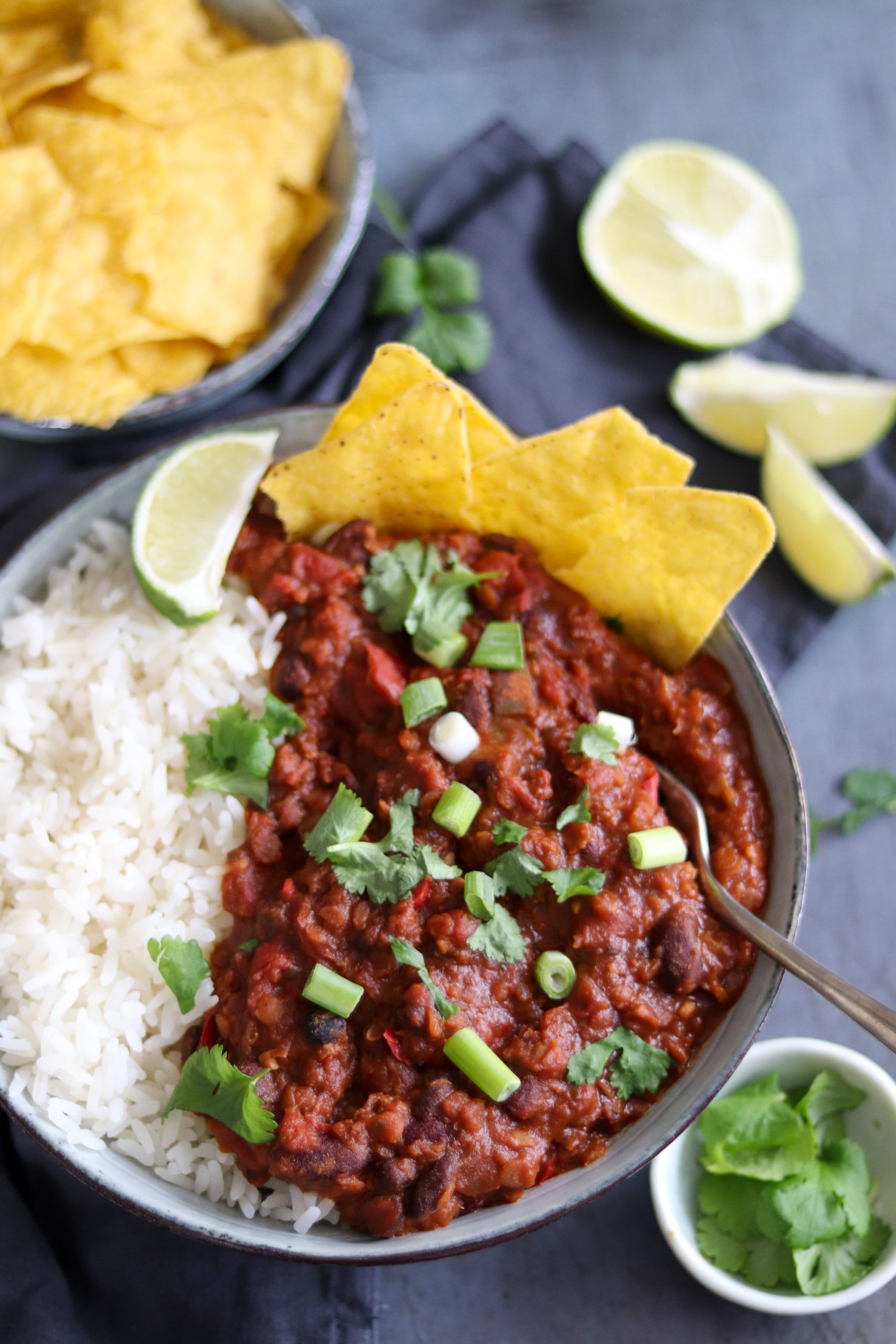 Over the past few months, I have been making a conscious effort to step up what I am doing to help the environment.

I’ve always been an enthusiastic re-cycler (that phrase might catch on!) but I’ve been finding ways to do that bit more. As well as recycling I am trying to reduce the amount of plastic I use; especially single use plastic.

Aside from recycling, Mr Curly and I have also decided to try and eat less meat. This will be a pretty big change, especially for Mr Curly. Up until very recently he would consider a meal to be missing something without meat.

This meant that for lunch and dinner each day, there would be some kind of meat involved. I wasn’t sure how long he would last with wanting to eat less meat but so far we’re doing really well! 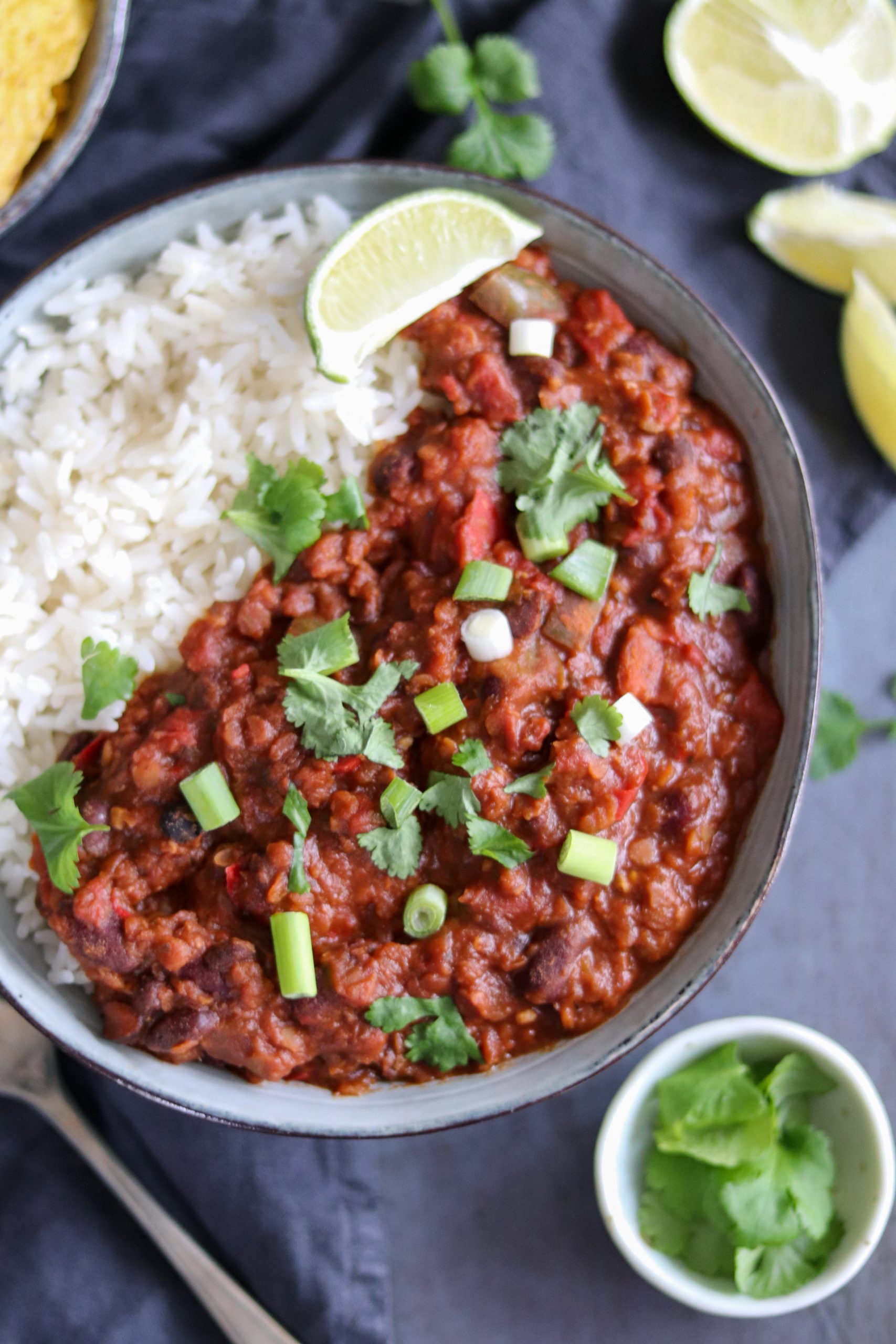 If food is flavoursome you won’t miss the meat

If food is packed full of flavour, you definitely won’t miss the meat in my opinion. In fact the first time I made this, Mr Curly didn’t notice it wasn’t meat.

As well as the flavour from the spices, I have used lots of beans and lentils. This makes this chilli feel substantial and filling. I think it also gives it a similar texture to minced beef.

Beans and lentils provide an excellent source of protein, lots of flavour and a great texture to this chilli.

If you would still prefer a meat option, check out my Chilli Con Carne and Skinny Slow Cooker Turkey Chilli. 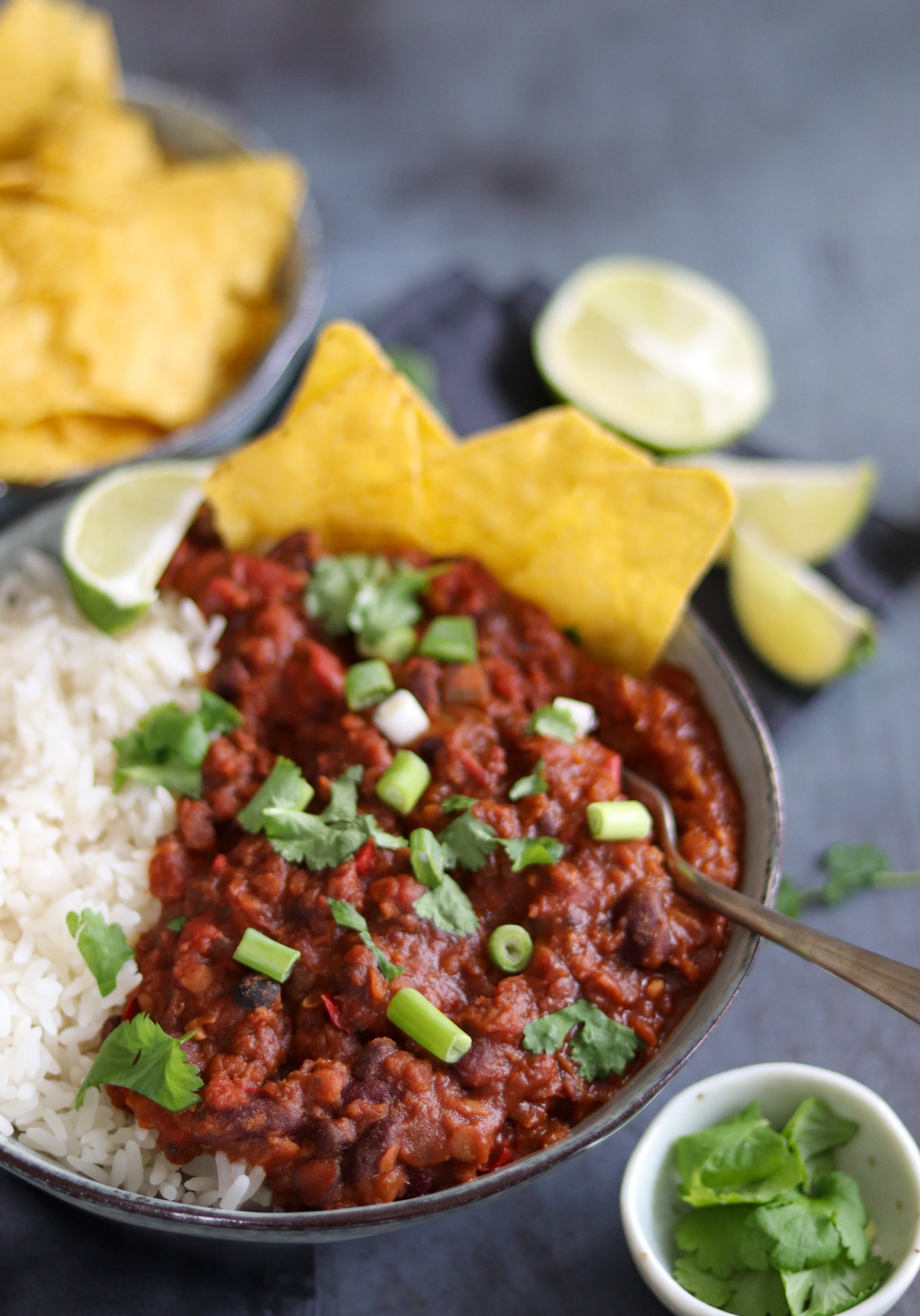 How spicy is this Vegan Lentil Chilli?

The recipe as written below is medium heat I would say. Beans and lentils can be a little bland so I think they always benefit from some spice.

Adjust the heat by adding more or less chilli to suit your tastes. Remember to always add a little at first because you can always add more later.

If you don’t have the chilli powders I have used, just use what you have. 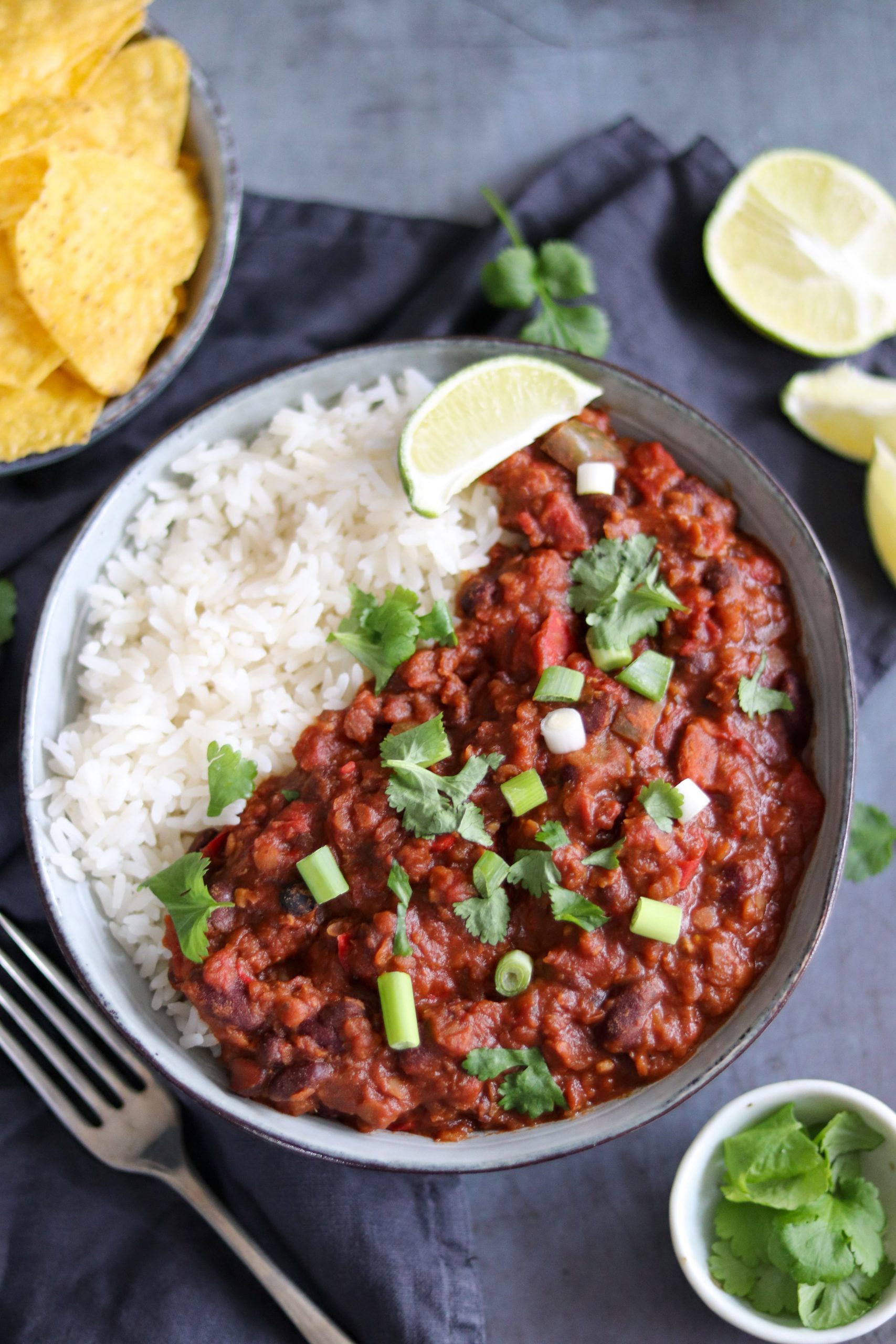 Which beans and lentils are recommended to use?

I have always added kidney beans in chilli sauce to my chilli recipes. I’ll let you into a little secret – I’m not a huge fan of kidney beans!

I’ve always added them to my chilli because this is what my Mum did, and because the chilli sauce they come in adds a lovely flavour to the finished dish.

I like them when they are nice and soft which is why slow cooking them works so well.

I also add a tin of rinsed black beans. They are such a staple ingredient in Mexican cooking and although this recipe isn’t authentic; I have taken inspiration from there.

Finally, I added some rinsed split red lentils. After a quick rinse these are ready to be added straight to the slow cooker. You don’t have to soak them beforehand.

If you want to swap any of the beans or lentils, feel free; these are just my preferred choices. 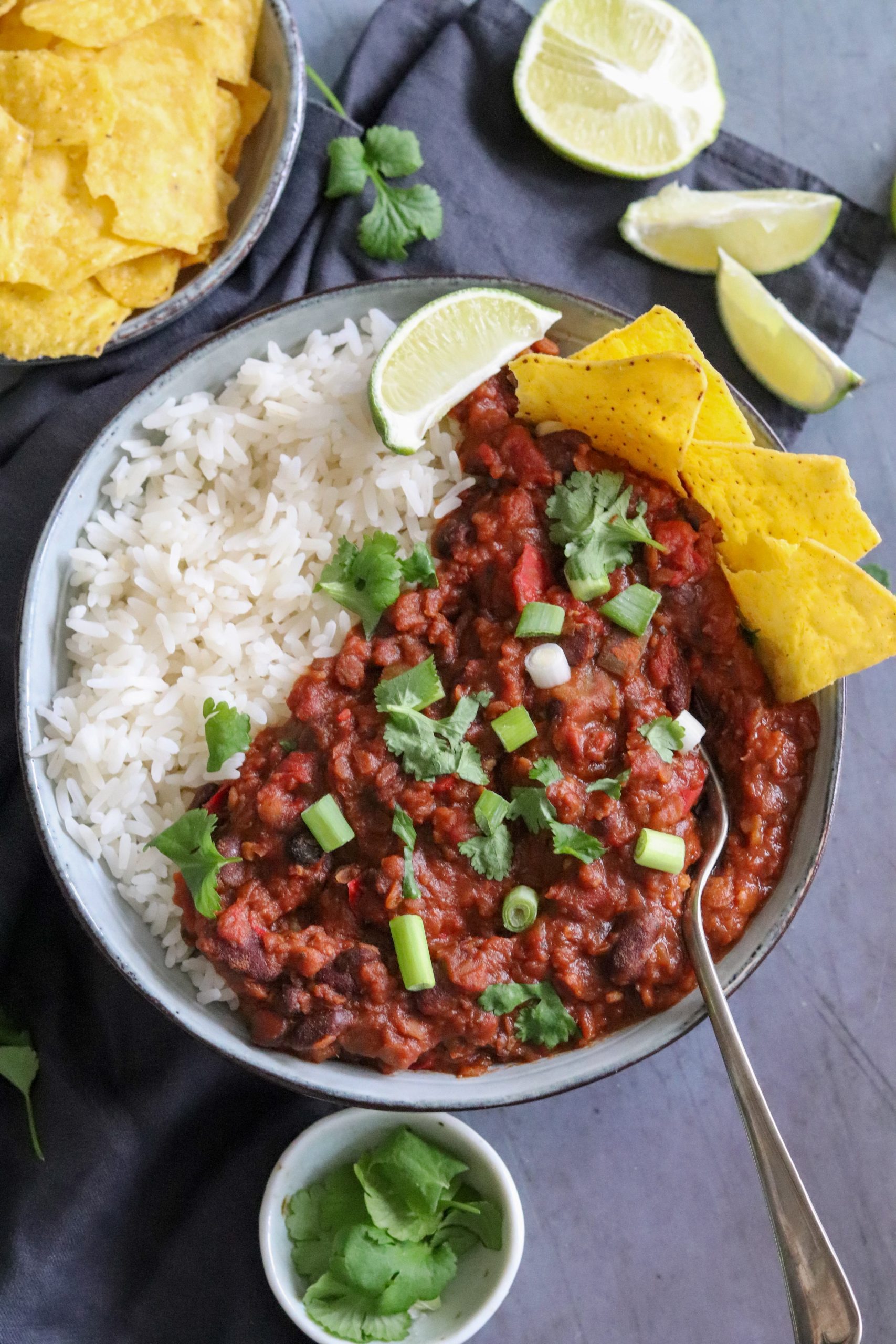 Can you taste the chocolate?

The dark chocolate doesn’t make the chilli taste of chocolate, it just adds a depth of flavour. Definitely don’t skip the chocolate!

The high cocoa percentage is what adds the depth of flavour to the chilli. You couldn’t use milk chocolate instead as this has too much sugar and a much lower cocoa percentage. 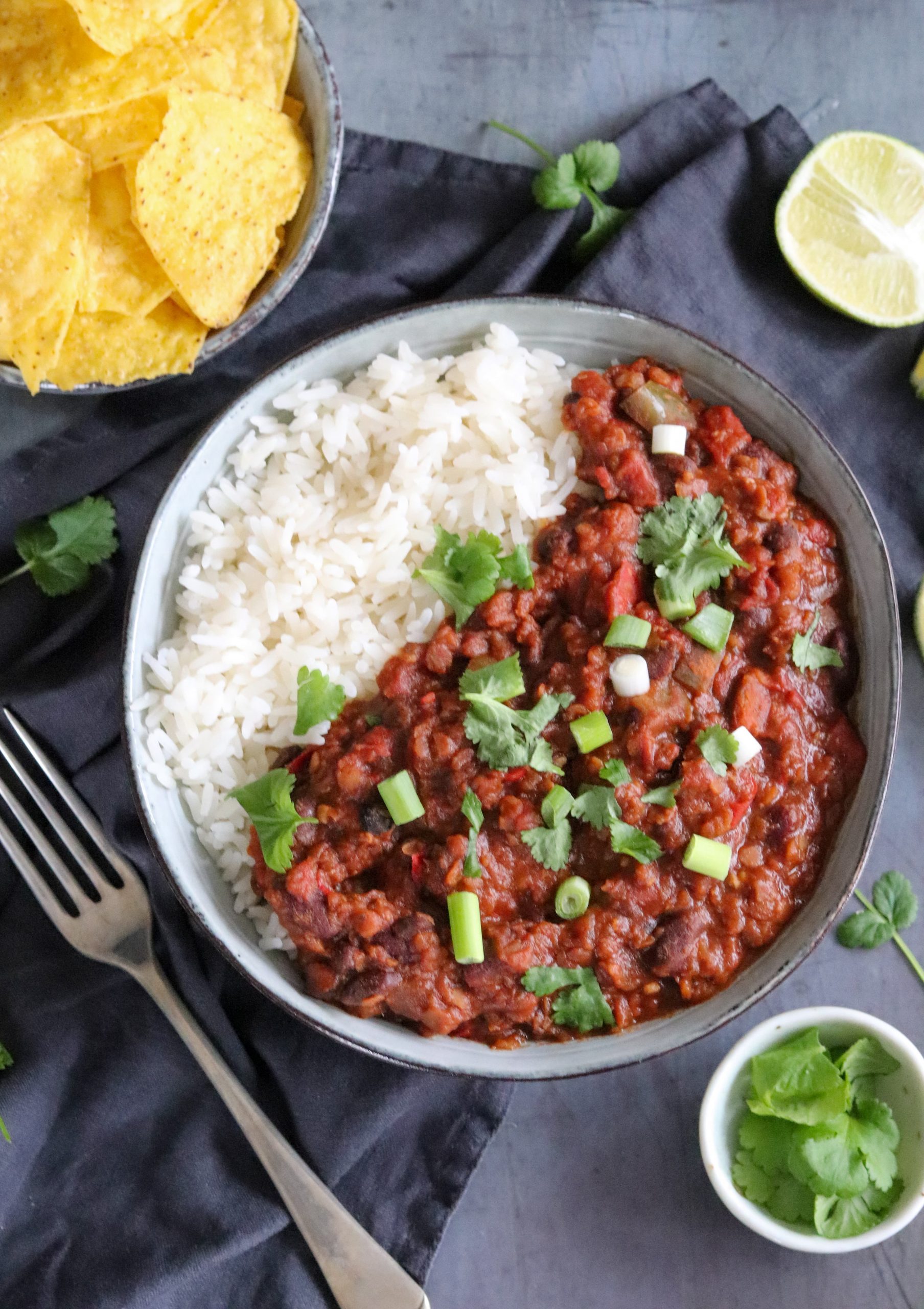 Does this chilli freeze well?

When you would like to eat it, leave it in the fridge to defrost for eight hours or overnight.

I prefer to reheat the chilli in a pan so you can make any changes like adding a splash more water if needed. You can also reheat in the microwave if you prefer.

Make sure it it piping hot before serving. 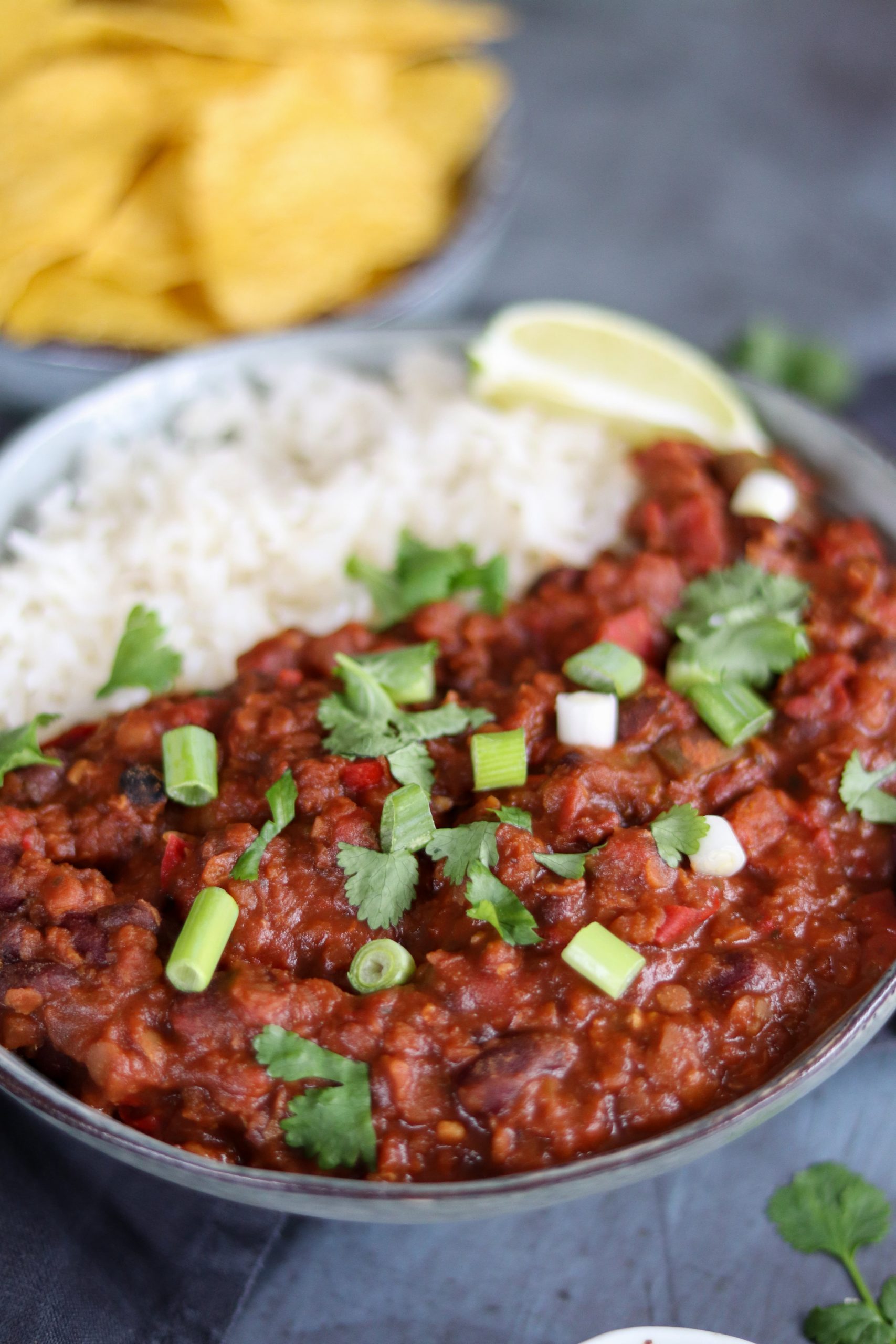 When I was developing this lentil chilli recipe, my intention was to make it vegetarian. When I finished tweaking it and got it to how I wanted it to be, it turned out to be vegan too.

I wasn’t sure if it was going to be vegan at first because of the dark chocolate. But most dark chocolate is naturally vegan, so perfect for this recipe.

And if that wasn’t good enough, it is also dairy free and gluten free too! The perfect meal to feed lots of dietary needs. 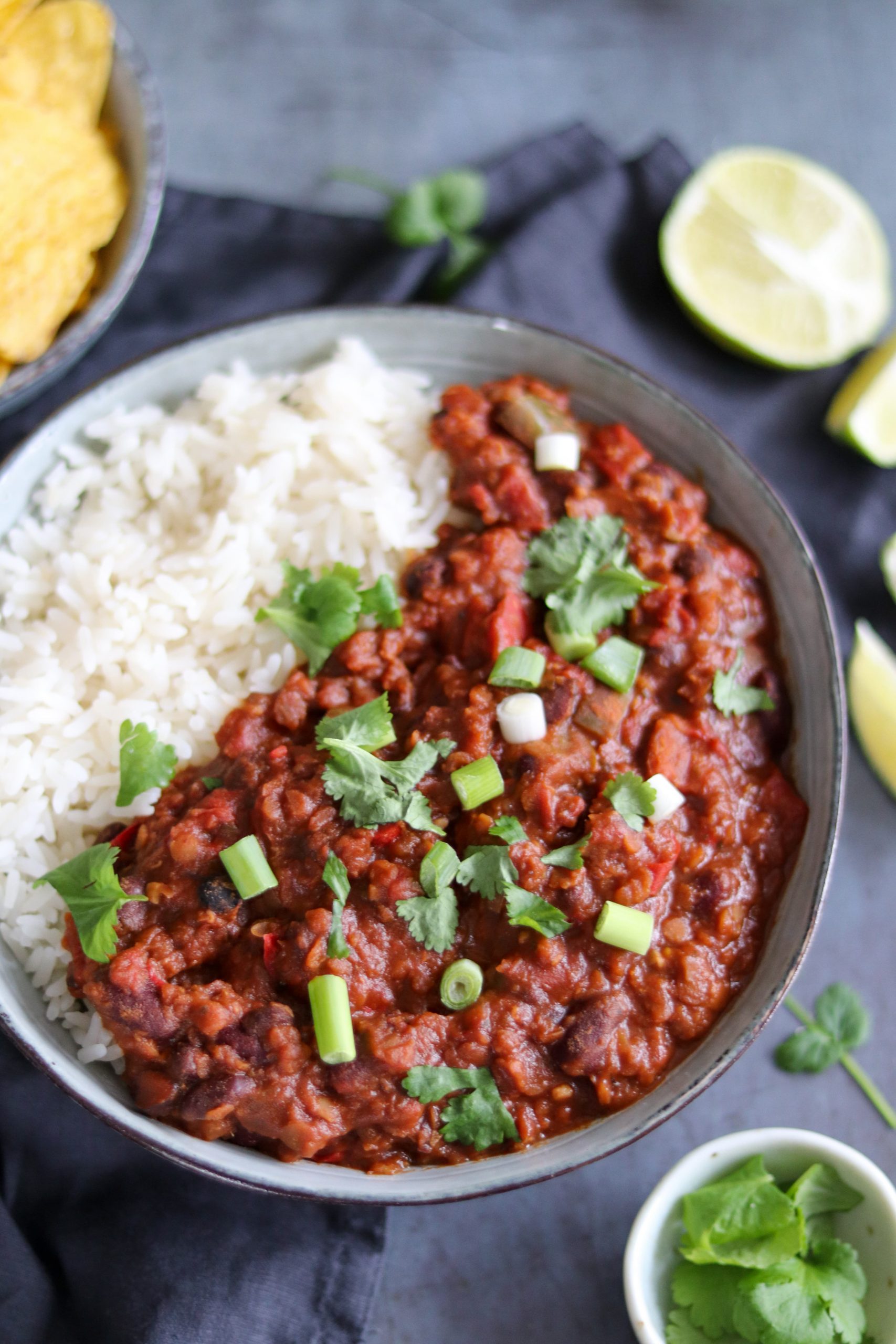 What to serve with this Vegan Lentil Chilli

As well as rice, I also like to serve some tortilla chips alongside for some added crunch. Check the packet but these should be vegan. 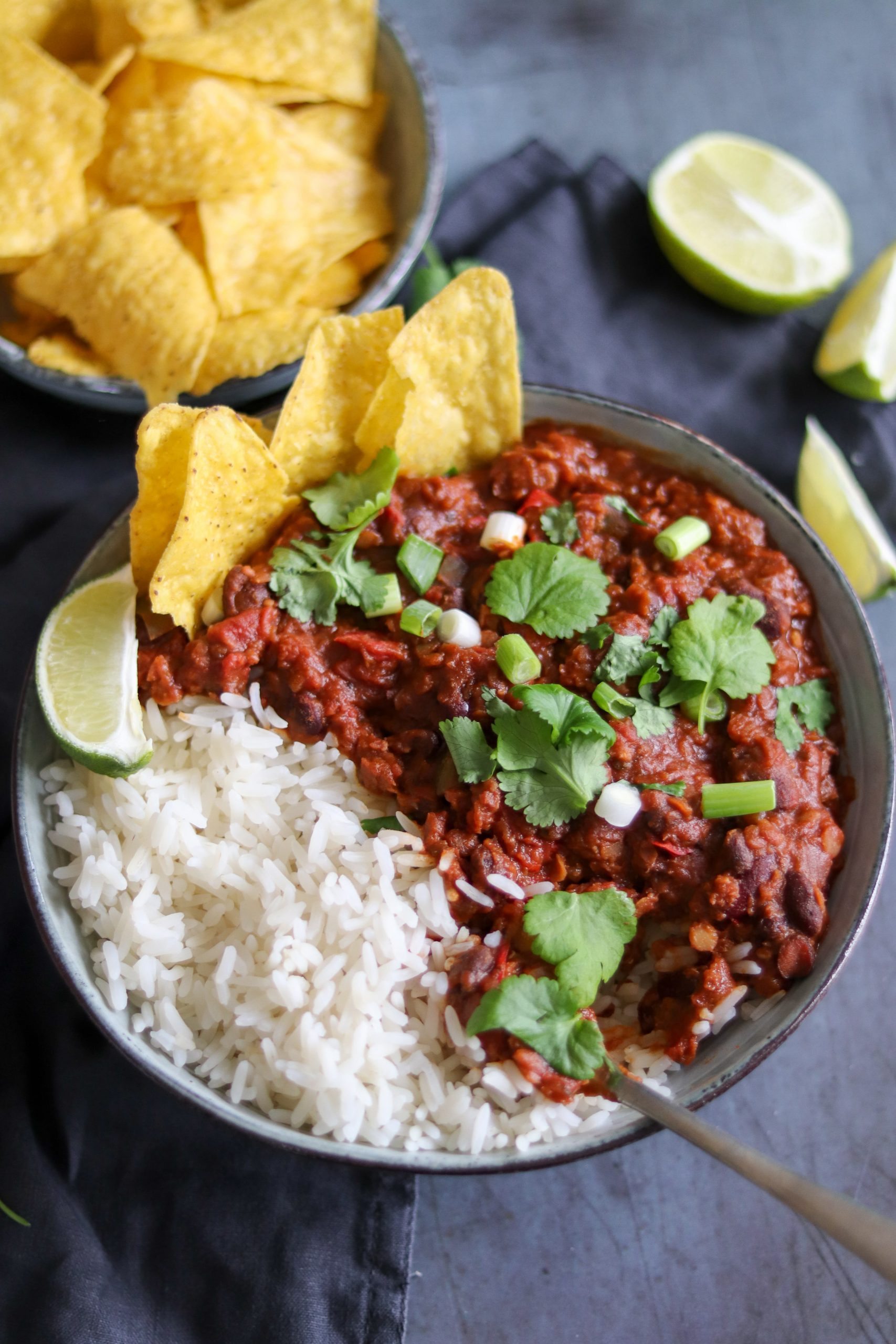 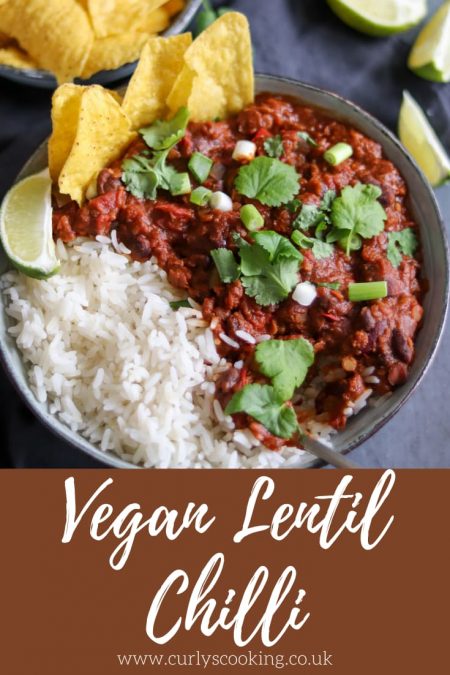 Delicious and comforting with a touch of spice. This Vegan Lentil Chilli is such an easy slow cooker meal that is packed full of flavour. You definitely won't miss the meat!