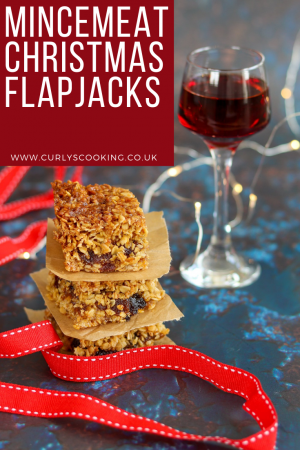 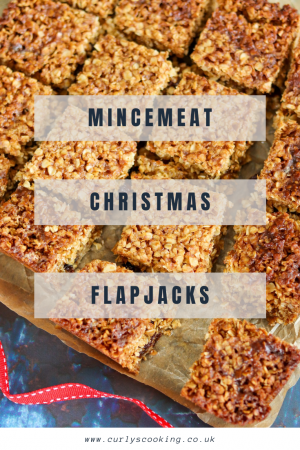 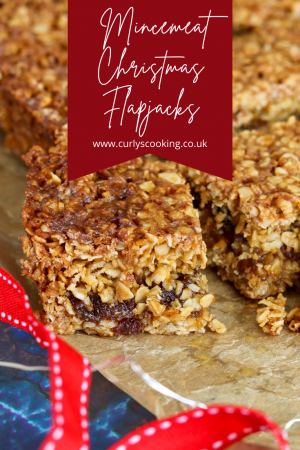 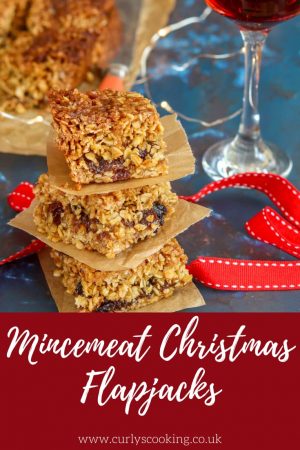 These Mincemeat Christmas Flapjacks are the perfect festive treat. Simple to make and very moreish; you’ll find yourself making these mince pie inspired treats throughout the holiday season.

What are Mincemeat Christmas Flapjacks?

These festive flapjacks are a twist on my Easy Jam Flapjacks. Delicious soft flapjacks with a layer of flavoursome mincemeat in the centre. Think of a combination of a mince pie and a flapjack.

The flavours from the mincemeat transform these flapjacks into the perfect easy Christmas bake. They are simple enough for children to help with and need very little prep so are ideal to make when unexpected guests are dropping in over the festive season.

But why is it called mincemeat? Well back in the 12th century mincemeat was made using meat as a way of preserving it. Over the years the meat has been swapped for the fruit – thankfully!

So don’t panic, despite the name there is no meat in mincemeat anymore. It is an essential element of a British Christmas and is so tasty!

A different way to use mincemeat

If you’ve been following my blog for a while, you will know that I have never hidden my dislike for making mince pies. I get too carried away and fill them with too much mincemeat and it’s a bit of a sticky mess.

That is until I started making Crumble Topped Mince Pies which are honestly the best I have ever made.

But just because I have developed a mince pie recipe that works perfectly every time doesn’t mean I will stop finding other ways to use mincemeat over the festive season.

I already have recipes for Mincemeat Pinwheels, Frangipane Mince Pie Slices, Mincemeat Thumbprint Cookies and my Mincemeat & Almond Cake. So these Mincemeat Christmas Flapjacks were the perfect addition to my repertoire.

which mincemeat is best to use?

I would recommend trying to choose a good quality mincemeat. There are quite a few choices; the fruits and spirits used vary and some may even include nuts. Pick one that appeals to you.

Do you prefer Soft or crisp flapjacks?

That is one of the most important questions when talking about flapjacks. I am 100% team soft flapjack.

These Flapjacks are deliciously soft apart from the outside edges that are slightly crisp. If you are strictly team crisp flapjack and need more than the edges to be crisp, bake them for five minutes longer.

The mincemeat really helps to keep these moist and soft. So even if you prefer a crisper flapjack and bake them for a little longer, the mincemeat will prevent them from becoming too crisp in the centre. An advantage in my opinion!

Which oats should be used for these flapjacks?

The most readily available oats in supermarkets tend to be rolled oats, porridge oats and jumbo oats.

Jumbo and rolled oats are a little larger and will provide a crumblier texture. Porridge oats will make a denser flapjack which is what I like.

I use porridge oats to try and ensure minimal crumbling when I cut the flapjacks. But please feel free to use the other varieties.

Flapjack purists might disagree with me, but I don’t think any oats will result in a bad flapjack.

How long will these flapjacks keep?

These Mincemeat Christmas Flapjacks will keep in an airtight container for up to a week. They become slightly softer and chewier each day after baking which I really like.

So if you prefer a softer flapjack and can resist eating them all on the day you bake them, leave them for a day or so for maximum yumminess!

This also makes them perfect for over the festive season because you can bake them ready for if guests pop in. They don’t take long at all to bake which is crucial at a time of year when everyone is busy.

If you want to make these Mincemeat Christmas Flapjacks gluten free, make sure the oats you buy state that they are gluten free.

Although oats are naturally gluten free, some are prepared in factories that deal with gluten so it is always worth checking.

You will also need to make sure the mincemeat you are using is vegan. This is becoming more common these days so should be easy to find if you don’t want to make your own.

How many flapjacks does this recipe make?

That really does depend on how big you want to cut them!

I like to cut these into 16 squares because for me they are the perfect size when you want a sweet snack.

If you are making these for children, you could cut them into smaller pieces quite easily. They make a great addition to lunchboxes. 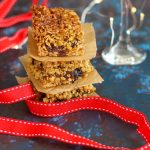 These Mincemeat Christmas Flapjacks are the perfect festive treat. Simple to make and very moreish; you'll find yourself making these mince pie inspired treats throughout the holiday season.

Keep in an airtight container for up to 7 days.